Life in the Snow Globe

Today was Japan Day - a fun day to be sure on base - but we missed it. Michael didn't have the energy and the rest of us decided to hang out with him. 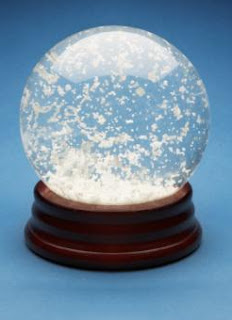 It snowed off and on all day. Some fairly good flurries - but no significant build up. The world was blanketed in white this morning, but the roads were clear by 10:00 a.m.  There is a definite bite in the air. A local friend commented all the quakes and snow makes living in Misawa feel like living in a snow globe. Great analogy - accurate too.

Jared worked again today. He has training all day Monday and Wednesday. His shifts are shorter; but more frequent. We're all adjusting. He starts around 3:00 - 4:00 p.m. and is done around 9:30 p.m. This may work better for school. In any event he is on track to be done by Mid-May.

By the time 3:20 came around Michael and the kids were ready for an outing. We thought about the beach - but there WERE snow flurries and the wind can be fierce on the ocean.

I dropped Michael, Yuuki and the four younger ones off at the Chuo Park (Train Park) on my way to drop Jared off at work. I hopped over to the commissary and bought groceries - AGAIN - and then picked them up on the way home. That was enough of an outing for Michael. A bit challenging but not over-taxing - just about right!

Here are some photos of the fun at the park.....the kids were happy to get away from the house. 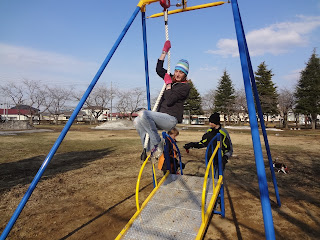 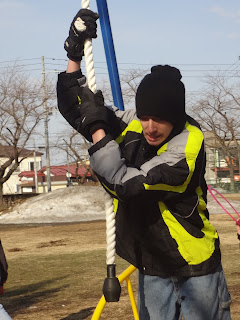 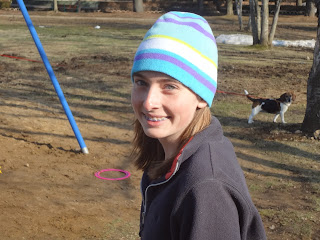 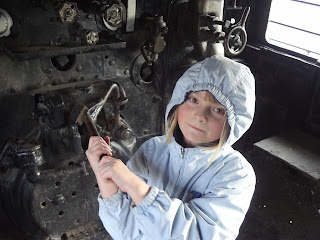 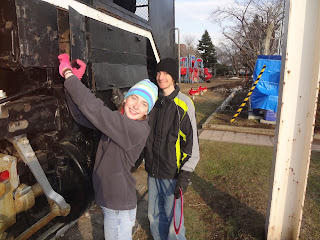 I have to include a photo of Zander....so I'll go with this funky one. It seems somehow appropriate!

Joyfully Penned by DeEtta @ Courageous Joy at 5:22 AM 0 Gracious thoughts