In Sickness and in Health

It is good to be home. I have an unbelievably wonderful wife. Every day and every night, she was by my side. For those who have been there, there is nothing better than to see the love of your life as you come through the bewildering, confusing moments when the anesthesia is wearing off. Sweetness to the eyes, and comfort for the soul. This whole thing has me thinking about the phrase "in sickness and in health..." As a pastor, you are expected to be the "expert" on these sort of things, but the truth is the experts are those couples who have been married 40, 50, 60+ years and still holding hands. The expert is the man who is sitting by the bed of his alzheimer-stricken wife unrecognized but still in love. The expert is the wife who lays awake at night listening for sound of her husband's breathing to change... Although this past week has brought me a bit closer to the answer to what this means, the more I think about it, the less I know.

This is another recipe from our "hospital adventure". I don't usually use pudding but these were GREAT.


1 c. soft butter
3/4 c. brown sugar
1/4 c. breakfast sugar
2 eggs
1 pkg instant pudding mix (coconut, vanilla, or butterscotch) Note:  instant works better than the pudding mix that must be cooked
Sift in:
1 1/4 c. flour
1 tsp. baking soda
Stir in:
3 1/2 c. instant oatmeal
Optional: 1 c. raisins, chocolate (or other) chips, or nuts
Store dough in covered bowl in fridge.
Bake 350 degrees for about 10-12 minutes
Note, I would sub rapadura for the sugars - 1:1.  Unless I find pudding without the artificial flavors and preservatives this will be a sometime treat or a take somewhere treat as Zander would be sure to over-consume. LOL  I'm going online now to search for pudding/jello options as Michael is eating copious amounts of both and they aren't something we usually stock.


Note - Note: Jen just told me she made them with whole wheat and coconut flour and they were good too.

Yes, another granola recipe. I've loved this both times I've had at PWOC. Now that I got the recipe the big differences between it and my "favorite" recipe which affect taste  seem to be both honey and maple syrup (I usually just use honey) and less cinnamon but added nutmeg. I DO use a bit of flour, flakes and water - but those would affect texture (we like clumps) more than taste.  In any event this is GOOD too. Kimberly suggests chocolate chips, but that may be sinful.

A bit of a rough night last night as the morphine simply wasn't lasting 12 hours. I knew to pull out a percocet. We're cutting back on these due to the rising liver enzyme but I had been told I could give 3 and I knew this would hold him the remaining 4 hours until he could have more morphine.


Michael's been doing great today. He even sat at the table for dinner....ate different food than us...but was at the table. None of the dire symptoms I'm to watch. He reports the organ pain he was feeling is lessening and so I do think this was all drug induced.

I've got this stripping the drain technique down now....and when I changed the dressing the infection is no worse...no better, but they seem to content to leave things as they are. 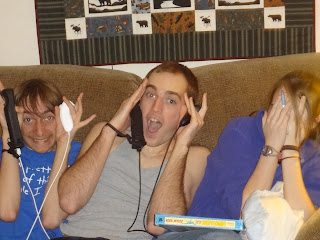 Enough med stuff.....today we also cleaned the house. Baked some cookies. Uploaded 2006 of this blog to Blog2Print and ordered hard copies. Cancelled airline tickets. I edited Jan 2007 of the blog....and generally kept busy.

Stacia and Zander are taking advantage of having dad home - fairly immobile, without an agenda. Here he reads to them. 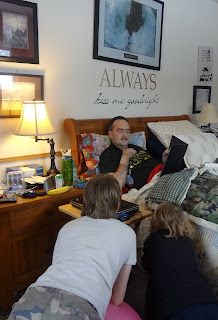 The kids had some friends over to play games....A fantastic dinner was delivered tonight...Misawa Rocks.

Joyfully Penned by DeEtta @ Courageous Joy at 4:39 AM 2 Gracious thoughts 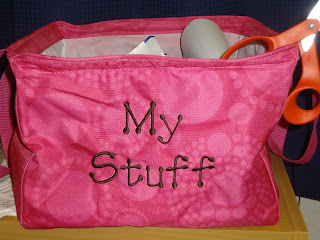 This little My 31 Square Utility Tote is a symbol of how quickly and drastically life has changed around here. I ordered this from one of my PWOC gals in Yokosuka. I thought it would be a great thing to have to tote around files, decorations and doo-dads at upcoming events. We saw them all over Yongsan during conference. I couldn't think of anything zippy to put on the side; you see what I did.
I've developed something of a fetish for bags and totes since mine were stolen on the way to Japan.....they'll never get my last bag again! ::snort:: I know Michael rolled his eyes, harrumphed and thought I'd NEVER find a use for it....but there you have it...it's perfect for 4x4's, scissors, narcotics, tegaderm, tape and various other post op supplies....all in a very catchy and snazzy container. ::snort::
Thus, life changed. I had tickets to fly to FT Bragg on the 29th of March. I would follow that trip up by speaking 3x, training, and chillin with the gals at Camp Zama. They say it takes about 40 hours to prepare for a 1 hour talk....just giving you an idea of the time I'd invested....and then...Michael was in the hospital.
I suppose this generation always assumes at some point they'll hear "cancer," it seemed inevitable when they said the ultrasound looked like cancer in the gall bladder etc.  A cat scan left them assured (I thought)  we were dealing with a gangrenous gall bladder. Certainly not a wonderful thing...but better than cancer.  Then we heard Michael needed to be admitted immediately to start big time antibiotics through IV's and to stabilize him for surgery. The fear was that the gall bladder would burst or he would go septic....
God provided beautifully. I love Michael's surgeon. She's a Christian I met at a PWOC Bible study who prays for her surgeries. Many times I've prayed for her to have steady hands and a quick mind...the night before the surgery she stopped in and said, "I want you to know I'm going to go in lap. If I see cancer we're closing him up and getting you out of here."  She also shared how she may have to open Michael up if the gall bladder was too enlarged etc.  I've thought through cancer - seems to me the best thing to do is GET IT OUT...so I responded, "If you see cancer why don't you just take it OUT?" She explained that Gall Bladder cancer is a seed cancer. It's aggressive. Any instrument or gauze etc.  which touched the cancer and then something else would infect other parts....
Meanwhile Michael's gall bladder was hard, 10 mm big, his fever was rising, his blood pressure tanking and they thought he'd developed a clogged bile duct as he was vomiting etc. There was talk the a.m. of surgery of sending him to Hachinohe. They did one more ultra sound and then came in and said, "We're going to surgery," and were gone.  At 2.5 hours Doc sent out word  she'd started lap but was opening him up and it would be a while. I knew there was no cancer. Surgery took 6 hours and something else was twisted, he's a bleeder, the gall bladder was dead, dying and gangrenous, he was "going septic"...when he gets sick, he gets SICK.
Now some hospital shots...don't even TRY to lecture me....this man has it coming after 9 documented labor/delivery episodes...yes, he was discreet and so was I. I won't post the incision photo until Michael finishes crafting his wild tale. 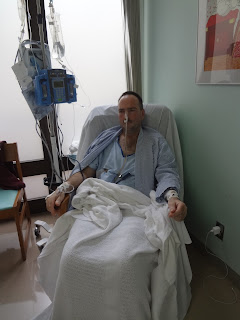 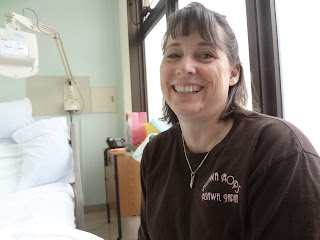 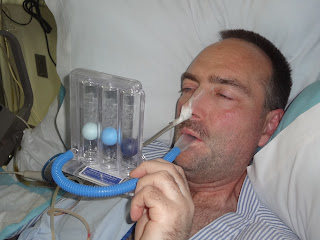 I learned a ENFJ/Futuristic/Global thinker needs to surrender every thought to Christ. It IS possible to live in the here and now and take thoughts captive to Christ. I don't need a plan for every scenario. I experienced God being Emmanuel in the midst of every twist and turn of this journey. I discovered I can still dance with God. I learned anew to simply surrender and climb up into the secret place of His presence...and He will cradle me.
The Misawa community has truly been Jesus' hands and feet to our family through this time. Friends who came and sat during surgery, food brought to the kids, visits, rides, muffins, cookies, subs for Bible Studies, staff filling Michael's role....we are blessed.
Michael came home....I've learned  the best way to dose various drugs for pain control, I've learned how to strip a JP Drain,  how to change dressing without gagging (and you know someone is going to have to pull this tube out and suture his side up eventually - and it ain't gonna be me) and how to fix very BLAND food.....I've learned about pancreatic and liver enzymes and I continue to remember  He continues to be Emmanuel...He is here. He will always be.
I'm thankful to have Michael here. I will enjoy the here and now. I will not fret about what could have been.
Those trips of mine? Doc scheduled an appt for Wed, hoping for a clean bill of health so I could fly Thursday...but after the lab results...well...things continue to pop up quickly.
The ladies from Camp Zama blessed me with the care they showed  my family. I was still wrestling with the trips scheduled to start this upcoming week. They called an emergency board meeting. They consistently offer prayers and support...and this was no different. Amanda, their president, wrote me a beautifully encouraging email and told me they were taking the Zama portion of speaking and traveling off my plate.
I wrestled a bit more - because "All I've ever wanted to do in PWOC is TRAIN" and last year I missed Traveling Training due to the tsunami...and we are all  hoping Michael will be fine by Thursday...but bottom line...my priorities are here. My heart is here.  There is NO WAY I can fly to the states and leave Mike here to fend for himself when he tires easily, can't drive, and is still in pain. There is no way I can leave while enzymes still play hop scotch.  I won't put Michael or the kids in that position.
I called Delta and PRAISE GOD - they agreed to give me a credit of $1400. I have to use the ticket within a year but they even will waive the penalty of $250 when I get them the hospital address and phone number.  This works out great. It won't cost PWOCI a dime to have me cancel. I have a ticket paid for and waiting for travel. I figure if Michael ends up flying out of here before this is done, I can fly one of the girls over to watch the kids...or myself over to be with him...and if he recovers quickly from here on out? I do believe I've been promised a second honeymoon in Hawaii - it's been 28 years....one ticket is purchased. ::snort::
Choosing Joy!
©2012 D.R.G.
~Coram Deo~
Living all of life before the face of God...

Joyfully Penned by DeEtta @ Courageous Joy at 4:33 AM 6 Gracious thoughts