I found this darling little tea pot at Namdemon in South Korea. I thought it would be a great souvenir. 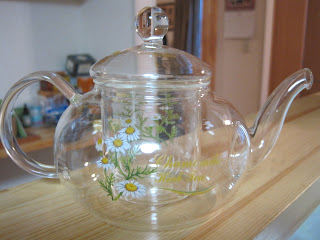 When I got home I read the packaging. ::snort:: 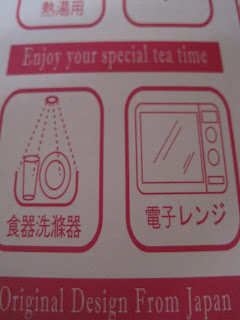 The weather this week has been absolutely fantastic! We've enjoyed it to the max.....3 picnics, an outside potluck.....and I've been doing LAUNDRY all day to get things dried before the rain starts next week. LOL

Friday was gorgeous. By the time Zander and I got home from our walk, I'd decided to play hooky. Windy agreed. We emailed a few others. Twyla and boys were able to join us.

I was late! In Japan - you IGNORE police with flashing lights. You pull over if they put on the sirens. I noticed the police....in front and behind me....I noticed the flashing lights....I didn't remember that ON THE BASE they have a sort of eclectic set of driving rules...mostly American but Japanese style. Ok now....so...good reminder that I'm only on loan to Japan. ::snort::

I was SO relieved to see the police speed off that I took the wrong turn.....and was looking to figure out how to turn around when we noted a HELICOPTER was cruising right above our van...and finally security forces jumped out into the lane.  I was informed that I couldn't pass. I told her I was trying to find the lake and wanted to do a u-turn. I wasn't allowed to do that either. There was an alarm and alert at Security Hill and we were the first car stopped.....so we watched and wondered....and the fighters began to do some circles...rather low....and I told the children...."Well....maybe the North has done it and we have a front row seat..." but all was well....or you would have heard about it on CNN by now. ::snort::

We finally MADE it to the beach. A few of us got strange sun burns. We all had fun. Zander caught a tadpole.
We were up bright and early today to get Arielle and Jared to the meeting point for a work day at a Christian retreat center. They were to meet at 6:45. Arielle was the only girl who showed up. She opted to stay home.

I spent a bit of time on a ministry call....watched movies...hung laundry...the kids washed the Joy Mobile....
We attended a "Fighter Wing Staff Agency" Potluck. It was fun to visit with old friends and meet some new ones. Susie talked to me about hopping. She goes out of here to all over - often. She has 4 young kids. She shared a few tricks with me. She gave me a website to check. She's been to Korea, Kadena, Guam, Alaska, Seattle...all on hops....not the Patriot Express but hops. I am excited to do some research and give it a whirl.

Jared says it will cost a lot in hotels. I may leave Jared in Misawa. ::snort:: I'm going to TX or OR or WHEREVER THE PLANE MAY GO....my babies need an adventure. ::snort::

Joyfully Penned by DeEtta @ Courageous Joy at 4:16 AM 7 Gracious thoughts