I fell on the ice again as we were loading into the van to go to the commissary. After assisting me up, Stacia (6) helpfully suggested, "Mom, we need to get you a FACE MASK so you don't get hurt when you keep falling on your face!"
It's official....I now ache all over...front and back. I really think I'll find an onsen tomorrow.....even if I have to go alone.  Missing my onsen buds.

While probably not the best total body workout; shoveling all this snow certainly did get my heart rate up. I can tell it also worked my back and shoulder muscles.  The added bonus being the kids loved their extra long recess. 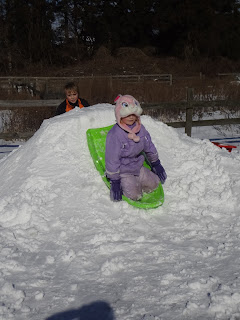 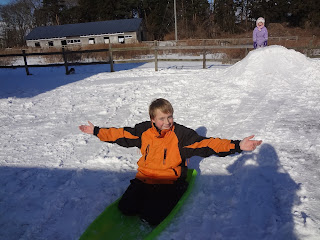 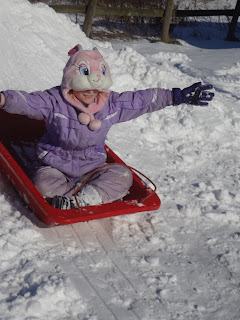 No, I didn't get all the way down to the asphalt....basically got all the loose snow moved over to form the sled hill....the packed stuff was there to greet us when we got back from TX. I figure it needs Michael, Jared and Nolan's touch.


After all, I'd hate to deprive them of THEIR chance for a winter workout.  Now it's back to Ancient Mesopotamia and and Land Animals.

For years the whole sourdough starter, waiting and waiting four dough thing....intimidated me. I've ground wheat and baked bread for nearly 20 years.....but somehow it seemed to scary and time consuming to try sourdough. But sourdough is Michael's favorite. I had planned to conquer this last year...and didn't....so I was on a mission this year!
I got a starter on Sunday (has it only been 5 days? WOW). I've fed the thing, babied it, emptied it and made 9 batches of English muffins, two loaves of bread (I shortened the wait by 5 hours and so they are flattish...but when you need a sandwich you need one!), and this a.m. a batch of sourdough pancakes.  I've discovered if the dough sours 8 hours most my family will be happy. If it sours for 24 hours Michael and Jared will LOVE them.


By making English Muffins two times a day for a couple of days, I've managed to get 6 muffins in the freezer....and by baking daily for a bit longer I should get a bit more...so when life is too busy to make them they'll have a couple days' supply in the freezer.  I plan to post all the recipes...but time is short during the week.  Here's the recipe I'm using most for English Muffins.  I've tweaked it to work for me (using Bill's method of cutting so I have uniform muffins because I'm THAT way), and I find the process is easier for me than the baking process of my Uncle's. I use Uncle Bill's recipe and the process from the above link when we don't want sourdough.  Michael and Jared really like sourdough. Though the whole wheat muffins from Uncle Bill were gone within a morning too.


This is the recipe I used for Sourdough Pancakes.
The verdict from the kids....they like THIN best. My suspicion is because the sourdough taste is new and on thin the syrup/sourdough ratio is more in favor of sweet....and you taste the graininess of the, well, GRAIN, more in the fluffier pancake. Both kinds have disappeared.....


I started dough souring to make more English Muffins tonight...so most of my starter is gone....I'm feeding it throughout the day and we'll try bread or pancakes again tomorrow. I'm working to get enough in the freezer to see the kids through my trip to Tokyo next weekend. LOL

Yuuki Photo of the Day 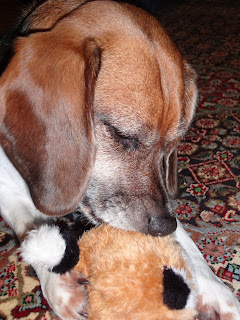 I hope this love of soft, furry, squeaky things does NOT transfer to gifts of mice in the spring and summer.
Choosing Joy!
©2011 D.R.G.
~Coram Deo~

Living all of life before the face of God...

Joyfully Penned by DeEtta @ Courageous Joy at 3:04 AM 2 Gracious thoughts 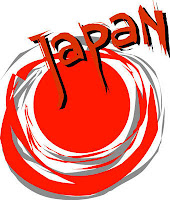 Our big news of the day came via email. Michael was informed that our DEROS (Date Expected to Return from Over Seas) has been changed from July 2012 to July 2013!  This means that we will be staying in Japan for one more year.


We are very excited and yes, it is an answer to prayer. We were by no means sure that our request would be approved as it was first denied.


I suppose anything could happen and it could change again...but as of today we are staying an extra year. We've simply not had enough time to explore Japan.....We are not worried about our safety. Remember, I WAS raised in the Philippines and during the days when the military wasn't allowed to travel to the south - I lived there. We've always believed we are safest in the spot where God has called us....and through much prayer we've felt Japan is just where He's put us for the time being.

We have given our hearts to Japan and we are blessed God is allowing us to stay one more year.  To date 2012 is proving to be a vast improvement over 2011. ::snort::

Michael told me today after MOPS and PWOC board meetings.  We told the kids tonight that we needed to have family circle early because Akikso san was coming tonight. Which was true. We read our chapter. We let all talk about what they were thankful for from the day.....then Michael said, "Tonight I'm thankful for four numbers 2-0-1-3. Jared figured it out immediately, followed by Arielle and Nolan in quick succession.

Joyfully Penned by DeEtta @ Courageous Joy at 3:00 AM 3 Gracious thoughts