I attended my wellness small group zoom. It's held at 0930 EST - that's 0530 AKST.   Stacia joined me at 0700 and we went out for our Bible Study. She and I are working through the New Testament this year. We're in Revelation.

The boys went out for THEIR study with Michael. The girls finished their school week. When Michael returned, I took the girls to Country Cutts. We like supporting local businesses, this is one that's been in our town for 37 years. The owner hopes to continue for 40 years, but due to COVID his business has decreased by 60%. I don't get it - I would think folks still need to get their hair cut.... a great perk of supporting this business is one can grab warm drinks on their way up the stairs. Thanks, Jacque, for the recommendation. 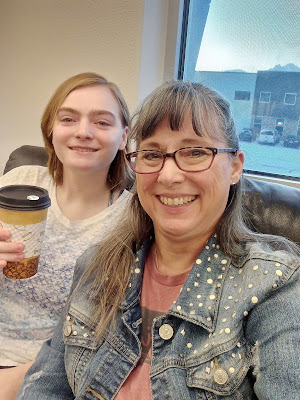 The last time the girls had their hair cut they had a bit of difficulty communicating what they wanted with a new hairstylist. Allie didn't get quite what she wanted - she thought she looked a bit like Jim Carey from Dumb and Dumber (which she did).  Stacia decided not to attempt talking and to just take whatever Courtney did. This was a silent agreement that did not result in a pixie cut.
The girls came armed with photos today. Courtney did a great job bringing the pictures to life.   Stacia has talked about a pixie cut since she had hair below her waist. She cut it to a chin-length bob, then went shaggy...and finally today...she went with a pixie.  As noted above, she hates actually communicating with hairstylists. I'm not 100% sure why - she says they are like clowns. I don't get that either. Courtney is content not to talk if the girls don't want to talk. LOL They love this trait of hers and say she is quite nice. The problem is she can't read their minds. She is almost perfect.  Armed with photos, and me as an interpreter, we tried again. 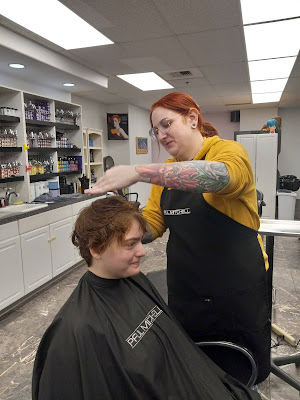 Stacia's hair is curly in the back, wavy on the sides, and straight in front....so we weren't sure what it would do when she cut it.  First, the big side swoop is gone...and we can see her lovely face again. It does make her eyes pop.  The front is still straight. Courtney said she can get a perm on the front if she wants to make it wavy like the back. We'll try a few other techniques first. 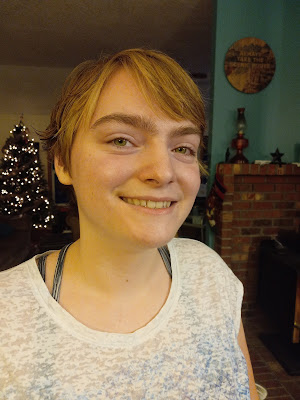 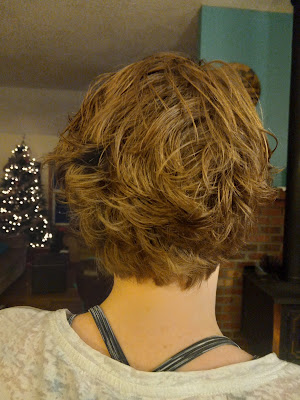 She is enjoying playing with the new hair length. I'm liking this well enough I'm considering a perm and a pixie cut. LOL
One of Allie's coping mechanisms in the past has been to shave her head. This has the added benefit of being low maintenance and causing people to keep their distance if they aren't close to her.  They assume she is either a lesbian, has cancer, or is having a mental breakdown. She says it's like "separating the wheat from the chaff." It's Biblical. ::snort::   Recently, she began talking about shaving her head again, long story. I suggested we try for a style that incorporates what she loves but keeps her poor head from winter frostbite. She found a cute style and Courtney brought it to life today. 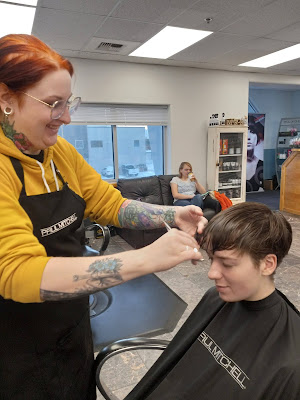 She left the front and top long - yay winter protection. 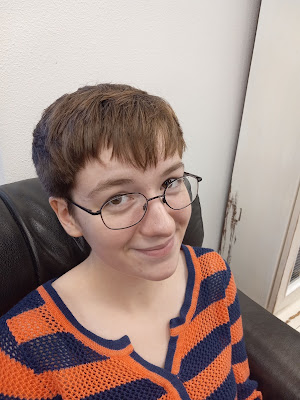 Courtney shaved around her ears and the back. I think it's darling. She kept it soft and feminine and shaved it short. 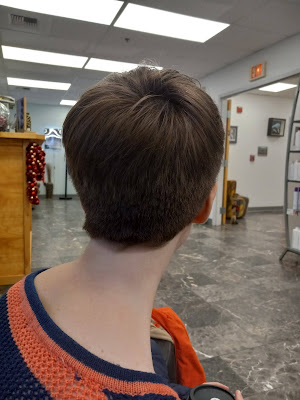 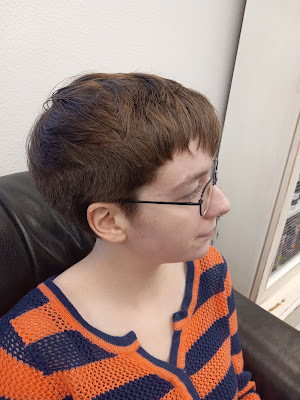 I have warm winter scarves the girls may want to use now that their necks are bare to the frigid Alaskan air.  It was a fun outing for a Friday afternoon.

BTW is anyone else shocked it's FRIDAY already?