We bought the older kids their names in Kanji last year. We planned to get our family name done as well - and the rest of us..... Enter this man.... who wanted his photo taken with Stacia.  His name is Wako Hachiyo and he is a Japanese Calligraphy Master. Check out that beard with the pony tail clip in it. Stacia was smitten...evidently the feeling was mutual. You can read more about him here. 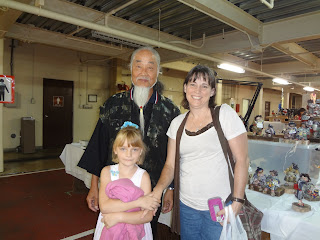 
Stacia answered "Doitashimashite" - Your welcome - not exactly a correct response in any language. ::snort::


He asked her name and she responded.

He made her a presento - a meaning paper (which I like as well as the finished products). 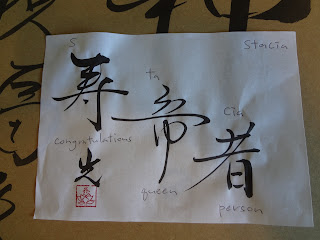 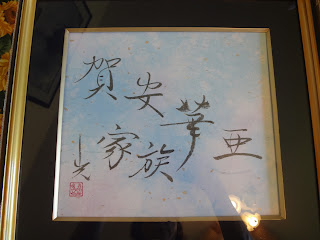 OK - we're the delightfully peaceful, gorgeous and wide family. I told him we have nine children and he said, "Very wide."  Then he said God Bless You - which is not the response we usually get in Japan. . . or in America come to think of it. ::snort::

Turns out he also has a "gift of healing." He transfers "excess energy," which he accumulates through mediation to others through his hands.

My Own Kaidan Tansu

This is my first year to visit the MOSC Bazaar. They didn't have one our first year here. I was traveling last year (I think the PWOC International conference).  Stacia was my only shopping partner. Michael did come to help select my major purchase, then he went to the office and we shopped and had lunch.

A funny....Stacia came downstairs looking ADORABLE  when she heard we were going shopping. I complimented her flower and butterfly and she told me, "I dressed up so the Japanese will say....ah, she's so cute and take my picture and give you a good deal." Um....I wonder what she will be like in the states without her paparazzi. I told her we were going on base and I didn't think there would be lots of Japanese people to talk to today. She was sad. 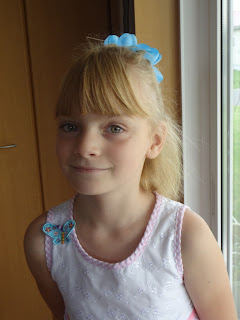 I was wrong. There WERE Japanese VENDORS, and KOREAN, THAI and vendors from Hong Kong.  She had a great time. She did get photos taken....and I DID get great deals....she got several "presentos" too.

We had been here less than 2 weeks when I saw a   Kaidan Tansu (Step Tansu). I knew I wanted to buy one before we leave Japan. I wanted something Asian, but not gaudy. We didn't bring a lot of our furniture when we moved here as we were told we'd be in base housing (old story). ::grin::  I began to save and window shop. The small ones I saw were running $1500 - $1800. I wanted a big one.

MANY told me the best place to buy one would be the MOSC Bazaar. This may be our last chance to attend a bazaar....however, if we are here next year, I'm sure to volunteer for this.

Michael was a bit surprised that I wanted a BIG tansu....I explained I was willing to give up the "forest in the corner" of our living room and the love seat to make it fit...but I thought it would fit. We compromised and got a "mid size". I didn't realize they'd bargain  (which isn't typical) but they said, "Chaplain, what do you want to pay for this?" Mike named a price far lower than I would have as I KNEW what the small ones cost....she asked for $100 more. We ended up getting the mid size for the price we'd pay for small one. I'm happy....and I really like the color we decided on too. The two big boxes and frame JUST fit in the van..... 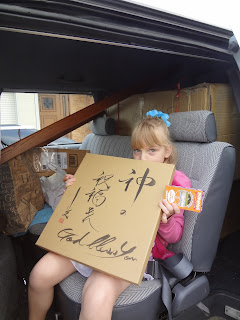 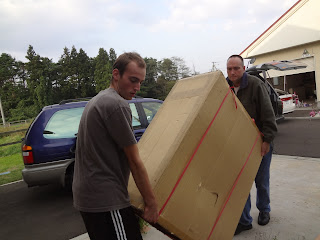 A word about our living room. It's functional.  When we realized we'd have a nice size living room, we wished we'd brought furniture....but I had in mind a step tansu so didn't want to spend a lot of money on furniture....we bought these little wooden shelves.....this is the ONLY space I've had to set out "decorative" items..... We don't have a family room - so the living room is LIVED In and functional....but I wanted functional and pretty......

This one was very full of school stuff...it spilled over to the left.... 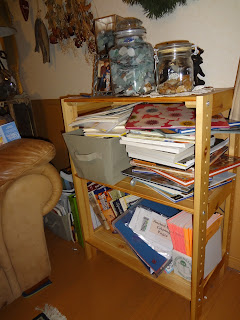 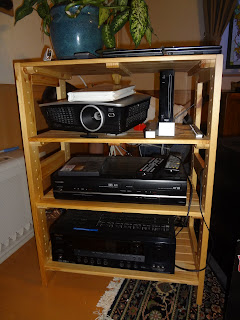 There are two types of doors - this means one side of the tansu is a plain side and one is decorative....the cupboard and drawers open from either side. VERY versatile.  Of course we had to DECIDE which doors would face the room and which would face the wall.... Michael liked flowers, I liked plain..... 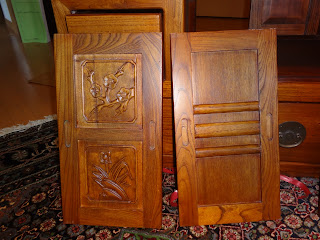 I suggested this (use both)....and was voted down. 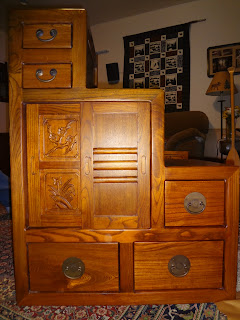 Plain side of the main piece 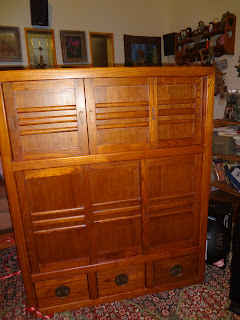 We moved the forest and I put the trees around the living room instead. We moved the "coffee table" to the entry way - which is nice for putting on snow pants and boots anyway.  I was able to bring out some decorative items. We spent hours cleaning, rearranging and fixing it up. The school stuff, Wii, Projector stuff is all still there....functional - but pretty....behind closed doors. I love it.

We put this piece to the left of our couch....the little teapots are antique cast iron pots. The jars hold some of our sea glass and agates found on the local beaches. 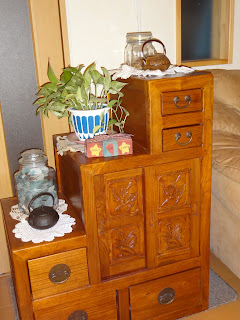 Top of the tall piece has my mother's day gift fountain (filled with sea glass), a basket of glass floats, more sea glass.... projector stuff, wii and school stuff is inside. 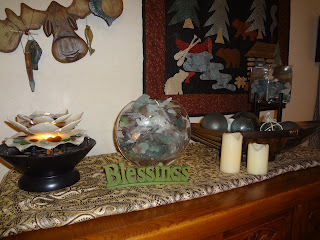 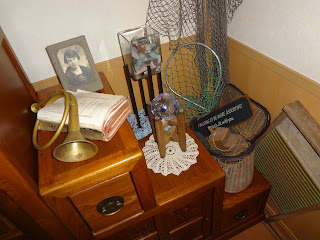 I was able to move things off this shelf and bring my Kokechi Doll Collection down...... 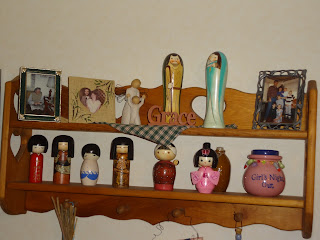 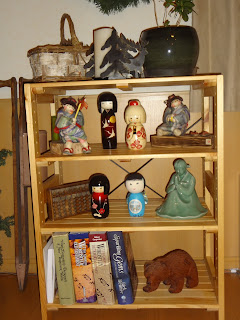 OH - this was inside the big piece. We removed it and then debated what to do with it...I suggested storing magazines, umbrellas, water bottles....the slipper idea has stuck. I  put it in the entry hall so guests can grab some slippers when they take off their shoes. 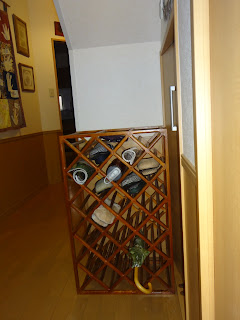 We also bought Christmas gifts for the girls and both Grandmas. We found a few other treasures. I'll blog about them later.

Joyfully Penned by DeEtta @ Courageous Joy at 5:23 AM 6 Gracious thoughts