Thanks to all who have sent links, book lists etc.... I thought it would be nice to share the list I'm compiling with you. This is a work in progress. The * items are ones that I plan on using or hope to use.... It quickly becomes apparent that the focus will need to be narrowed for our quick unit study. I plan to focus on the ELECTION/VOTING PROCESS and not delve into various Presidents etc. Again, thanks to all who emailed suggestions. Hope this helps others looking for a quick and inexpensive unit study.

Free Unit Studies
*12 week study from OK Homeschool Assoic - Thanks, Lisa and Cindy.
PBS Lesson Plans on all things to do with Elections Thanks, Michelle.
*Election Unit Study and Lapbook - thanks for turning me on to these folks Debbie and Lisa B.
Little Blue School - unit study hosted on blog

Websites:
*Electoral Map - updated Daily
Secrets of the Presidents (PBS KIDS)
White House Kids Presidential Biographies and coloring pages (supposed to be there but I've not found them).
*Scholastic Kids Election
*Fact Monster Presidential Elections
*Ben's Guide to US Government for Kids or here to pick your level.
Pew Forum
*Congress for Kids
Electing a President - fun things to do, unit studies etc.

Enjoy the Journey - retells their unit; the book list had been sent to be prior to my finding her blog, and the links are ones I had found, but I found it HELPFUL to read another's thought on the unit when she was DONE.


BOOKS..... Liz sent this list from her co-op, however, I've seen parts of this list on several websites.... and now I've added to it. LOL I DO have permission from LIZ and from DEANNA (co-op teacher) to share this list. I have NOT read each book, ultimately you will need to preview the books to see if they are appropriate for your family. The bold titles are ones I've found at our library - in fact if you can't find these books, spend some time in j324.6 and you'll be able to make some good finds. As you can see I couldn't find most the books on the list, but I have a LOT of options here for our studies. 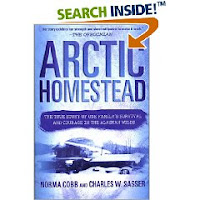 *Arctic Homestead: The True Story of one Family's Survival and Courage in the Alaskan Wilds* by Norma Cobb and Charles W. Sasser
From the book cover: "In 1973, Norma Cobb, her husband Lester, and their five children, the oldest of whom was nine-years-old and the youngest, twins, barely one, pulled up stakes in the Lower Forty-eight and headed north to Alaska to follow a pioneer dream of claiming land under the Homestead Act."
Norma Cobb was the last woman pioneer to sign up under the U.S. Homestead Act. I found this story to be interesting, readable and fun to read. It made me fall in love with Alaska all over again.

Hayley (and Jodi) as well as Amy have won copies of Saturdays with Stella. Please contact me and I'll get your book to you!

“Do all things without grumbling or disputing; so that you will prove yourselves to be a blameless and innocent, children of God above reproach in the midst of a crooked and perverse generation, among whom you appear as lights in the world, holding fast the word of life, so that in the day of Christ I (Paul) will have reason to glory because I (Paul) did not run in vain nor toil in vain.” Phil 2:14-16

I call the above verses my “whine or shine” verses. Our reactions to responsibilities, circumstances, crises will determine how we are perceived in the world. Do we whine? Do we grumble and dispute? If so, we’ll appear like the rest of our generation.

Do we want to shine in the midst of our generation? Then we simply must decide not to whine. We will begin to shine in our generation as we walk out Paul’s command. We will draw men to HIM because we will stand out…we will reflect His glory.

Join me this week in making a stand to shine and not whine!

Joyfully Penned by DeEtta @ Courageous Joy at 6:36 AM 2 Gracious thoughts