I couldn't put it off any longer. Today, while the rest worked at Mom G's, I stayed in the Caboose, dragged out all the school books and planned our upcoming school year. This is my 28th year of homeschooling - I almost said "our 28th," but I want to be sure all know we don't keep our kids at home forever and ever and ever to school. ::snort::

I struggled this year. As I drug everything out, I realized it's not school starting, it's the fact that school starting means the gorgeous summer weather will end, the rains will come and we'll be spending another rainy winter in the Pacific Northwest.  We tried to stay upbeat about it, but last year was hard.  Being confined to 268 SF when it rains and rains, led to cabin fever. We consoled ourselves by double-timing school to allow  "travel all spring and summer." We came up with a plan to allow us to school 1/2 time during travel weeks, to see lots of cool new things and have adventures...we'd spend summer as hosts in ID (doing school to allow for less when we traveled), fall in the NE and Winter in the SE or TX. We just had to survive a minor set back.

Planning for school this  year means accepting there is no reason to double time. We will go at a normal pace and spend a few hours a day at Mom G's. It will be easier for Michael this year as he'll have something to do and somewhere to go while we school.  We'll look for more to do outside of the trailer to keep us busy.  We will keep dreaming of the year we can travel "as planned." muhahahaha

I was GRATEFUL  Michael willingly went along with a teacher's planning day. It also gave me a day ALONE. I've been told I'm an extrovert, but I sure love down time all alone in the caboose. I've decided I'm becoming an introverted extrovert - yes, I'm sure that's a thing! Below are the history, lit, fine arts, Bible, and language arts books....science and math arrived at the end of the day, but the kids keep those in their backpacks.
Japanese is in Nolan's backpack....as are a few other electives....but I found all these I wanted to put back in the cupboard too.
I updated Nolan's transcript. I created Alex's transcript. We're doing Year 1 of Tapestry of Grace - Ancient Civilizations. The kids are really excited. It is one of my favorite years too.  With Tapestry, history is divided into 4 time periods. This means each child cycles through each time period every four years. They study each period in grammar, dialectic and rhetoric levels - or in normal speak in elementary, middle school and high school. ::snort::  This is at least our 3rd time doing  Year 1 - Ancients; it may be our 4th. We're fuzzy. Tapestry allows students of all ages to study the same subject matter at their own levels. For the teacher, a two-page lay out shows me assignments for K - 12th grade on the same topic. I can pick and  choose to tailor the curriculum for each child. We love Tapestry - though we've developed our own way of utilizing it as a tool. I teach the child and not the curriculum. I tweaketh.

THIS, other than the kids' backpacks, is the space I have for school materials. The tub stays in the van.  Since we aren't doing much travel I pulled the Good Sam Travel Guide and Off the Beaten Path out of the cupboard and will find a less accessible place for them. I could see I wasn't going to get all the books to fit.

I learned last year it works MUCH better if the Tapestry books are inside and we don't have to run through the rain to search for a book......I sorted the books by units. I thought maybe I could put the multi-unit resources and unit 1 books on our shelf.
Seeing that wasn't going to work, I packed all but the first week of books back into the tub. ::snort::  I also pulled out the notes for week 1 and 2 from the teacher's manual rather than trying to keep the whole notebook inside. This is much more manageable.
A beautiful sight - there is something about organizing that picks up my spirit.
I decided to head up to the office and pick out a new book to read check to see if  this year's math books and the Astronomy kit I had arrived. They did. Think Algebra 1, Algebra 2 and a big kit.....as I lugged the box back to our site - we are the farthest away from both the office and the showers - this very colorful Schoolie drove in and parked in the site across from ours. I must meet them.

Fridays are for Fishing - #WYFF

A lot was accomplished today.  Sadly, no one had swim suits today at the end of the work day. Stacia is the one who always grabs the suits on the way out the door - and today - her thoughts were on fishing! Michael and she had added line to the rod and she was excited to try it again.

Both Mom G and Michael had shared what has to be done after you catch a fish. You have to kill it, you have to clean it - and this means gutting. She has only done catch and release in the past.

The kids have been snorkeling and know the fish are up by the rapids. Stacia chose to fish downstream...where they had not seen fish. She caught a 9 inch trout. She doesn't seem very excited about the next steps in the process, does she? 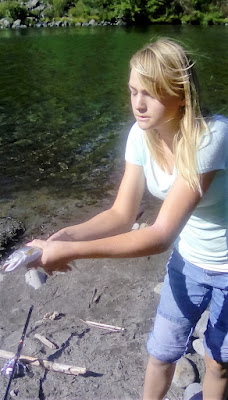 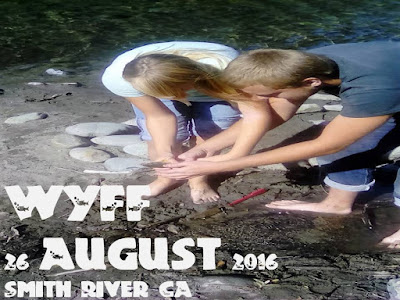 Ah - be free to swim another day....she watched to make sure it was o.k.
I prefer catch and release myself.

#WYFF (Where's Your Feet Friday) is sponsored by Fulltime Families. For more #WYFF entries, click the tab above.

The past week and a half has been hard.  We had two weeks to "push hard" before school "begins" ....tentatively set for 29 Aug. We school pretty much year round, but we've slowed down on a lot of the subjects as we've been stationary and helping Mom G all summer. We see two weeks of visitors in September, so it's wise to get a week in before Labor Day.

The 16th a dear college friend, walked from this life into eternal life with Jesus. It's good she is out of pain. I miss our communication.
The week didn't go as planned. The 17th,  Nolan had an episode which resulted in an ER visit, lots of tests for various things...at this point we know he had one of three things. As is often the case, a concrete diagnosis may not be forthcoming unless there are other episodes. We're all praying this was a single occurrence. We DO know it was not his heart, he did not have a stroke, it was not an allergic reaction to an insect bite and there were NO TOXINS in his blood (so it was not poison, herbicides or drugs). All good things to have off the table.

I discovered during Nolan's adventure  I can drive the twisty, windy, narrow Redwood Hwy at 65 mph if needed. This is good to know considering where we are staying and why we are here.  Michael discovered some tourists won't pull over even if you have your emergency flashers on, your high beams on and are laying on the horn. He had NOLAN in the car and was forced to drive 30 mph until the hwy empties into Hwy 101. I got there soon after they arrived.
On the 18th, while digging out Cork Elm roots, we hit a water main. It is obviously not 3 feet underground. ::snort::  This resulted in visits with neighbors and another trip into town. Things seem to be just fine now.

Stress immediately eased around here when all accepted the realization  we would NOT be finished with work before the 29th of Aug. In fact, we ARE here indefinitely for as long as we are needed. This looks like it will be - well - indefinite. We began talking about what it means to stay here as long as we are needed....and began investigating loans, land, and houses which are for sale in Mom G's neighborhood. We found some riverfront land we could possibly build on - and park the Caboose on while we build according to local code.....

We had a few hard conversations. If you care enough about others, you will lovingly and respectfully go to the hard places. We do and did.

We've continued to work hard. A neighbor told us they took a lot of "before" pictures sometime in the past.  She says it really shows how much we've accomplished.  It's easy to lose sight of improvement - we see so much which most likely won't be done before the "rains come."

There has been a lot of good happen, too, in the past couple of weeks.

We've learned to slow down and really listen to each other and what we each need in the moment. We're not ALL about work, work, work.....

CoRielle visited on Sunday, an event deserving it's own post.

We planned a day trip, which Mom G is excited to take, for the end of September.

We firmed up plans for visitors arriving in September - Earl (Michael's brother) and Josiah (our son).

We made plans for a parenting seminar we are leading in October.

We had lots of campfires.  The kids enjoyed many swims.

We had a "family meeting" (::snort:: be quiet, you elder Gherkins, they love family meetings - I'm SURE of it). The kids, one and all,  voiced they would prefer we not buy land or a house locally. They would prefer we continue our plan to be Fulltime RVers and see America. They know this means we will be parked locally a lot of the time. We talked about trying to get support systems in place so we can take off for a week every couple of months and plan an annual long trip. This could, of course, all change instantly if Mom G decides she wants to move or is willing to allow others to care for her.

We began dreaming of driving the ALCAN and spending extended time with JaRissa in the state we love and belong to.

Joyfully Penned by DeEtta @ Courageous Joy at 8:47 AM 1 Gracious thoughts