Jet lagged -  but HERE.  I'm so thankful that all eleven are us were able to attend Josiah's graduation. It really was a miracle. We are thankful to staff and leadership who made it possible.


Yes, he graduated....debt free! Working 40 hours a week...and DONE. Josiah hopes to do an internship this summer in a corporate office and then begin his Masters of Business Administration in the fall. He's faithfully following  the path God laid out for him when his personality and talents were breathed into him.  Josiah does plan to be a business success...the motives of his heart are a blessing. Years ago as he wrestled with either Bible College or Business College it was confirmed to him in several ways that he would be a minister of God regardless of which route he went. I believe he chose the route right for him...from the wheeling and dealing as a toddler...to now....and I do believe he will be a success. His heart is to bless his future family, care for his aging parents (::snort::), and shine for Jesus wherever he may find himself.  He's a blessing to us all.  It was pure joy to have all of us on hand to celebrate this accomplishment.


My only regret is I neglected to grab a photo of this year's THREE COLLEGE GRADUATES together....all for His glory.


The rest of the evening was a diversion. Shelby had planned a party for Josiah's friends. We had planned on planning a party, but having her do it sure allowed us more time to focus on spending time together. The party was a surprise and was kicking off on Sunday night..... but if we did nothing we KNEW Josiah would guess there was a surprise party afoot.
Families at the boys' church here in San Angelo had gone together and given a gift large enough to take our family to Logan's Steakhouse. We invited Shelby and the Hardings to go along.  I begged Debbie to go pick out the ugliest cake she could find and then have them write Congrats Joshua on it (his name is Josiah). My thought is we'd divert him. He'd figure - "Well - dinner with friends and a cake - shoot they didn't even spell my name right."
After dinner we headed to the boys' house. We had fun playing games....enjoying each other...celebrating... 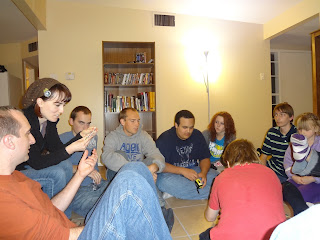 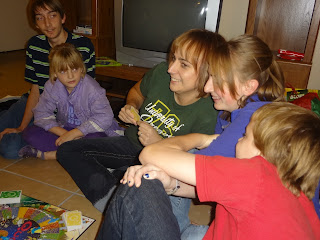 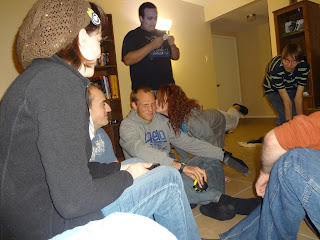 We called it a night - LATE - as we had a full day planned for Sunday - to include the surprise party Shelby planned.

Joyfully Penned by DeEtta @ Courageous Joy at 7:45 AM 1 Gracious thoughts