Our chicken saga continues. ALL of them now have very bedraggled tushes. It looks like something grabs a mouthful of feathers, leaving them bald, which wakes them up and they get out of the way. Except, of course,  for the four that were disemboweled or had their tushes torn completely out and the one still in isolation.

Unfortunately, our chickens appear to be rather stupid. One would think they would figure out to stick together, help each other out....but no! If they see a bare spot - they begin pecking....I wonder how this whole scenario would be different if we'd kept Hitler or Olaf, the roos.

This morning we found blood leading to the chicken door - but then it stopped. No blood inside the coop. There were chickens with missing feathers, but no one had torn skin. No signs of the weasel/ermine....
Harriet, above, was the first to escape the brooder as a chick.  She was the first to fly over the fence when they moved outside,  AND, it looks like she is planning to lead all the chickens out of the Horror House to safety.


She did her best to convince Alex they'd be safer in the woods.


Michael couldn't be convinced either. 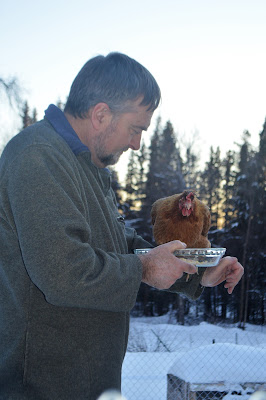 She's lucky the solitary confinement cell is in use. LOL 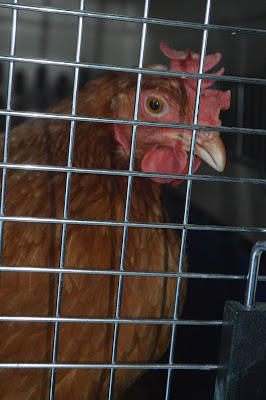 Poor girl. She wants back with the group - but we are trying to give her tush time to scab over and maybe grow some feathers. No infection so far - we are keeping our fingers crossed. I know it's doubtful we'll save her, but she doesn't seem to be in pain.

We are really hoping and praying we can figure this out soon. I've wondered if they all caught some strange disease that gives bald tushes....but it certainly wouldn't have eaten their tush or disemboweled them.....Odd.

We had just been debating if we wanted to pick up 15 chicks at a local store or order specific breeds through the mail.  We were also toying with the idea of getting meat birds this spring/summer.  Then this all began.....I'm not sure I'm cut out to raise and butcher meat birds. I'm not sure anyone would eat them.

Oranges? I Thought You Said KALE!!!!

Michael and Stacia were shopping. I asked them to bring home a bag of oranges. I got a BIG bag of chopped KALE! ::snort::

The problem is, NO ONE EATS KALE AROUND HERE....I am determined to cut our food budget and that means NO WASTE. I have used Kale minimally before....a few stalks in a salad....I don't like any of the kale chips I made - even when I massaged oil/ vinegar into them.

I have been eating lots of kale - which I'm sure contributed to last week's 2 lbs of weight loss. First, I put a bunch of kale with our last bunch of green leaf lettuce. I added shredded carrots and broccoli. I made up 9 cups and used it as the foundation for salads all week. Simply pull out the drys one wants and add the wets (cucumber, tomatoes, mushrooms - anything that gets slimy in a salad).
I made a Raw Kale Quinoa Tangerine salad - and it was yummy. 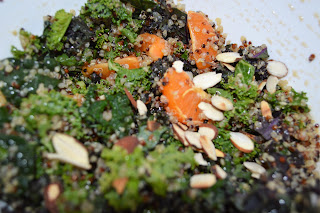 I love the dressing on this salad - a lot....but I'm trying to eliminate added sugar. I cut the Agave Nectar to 1 T and plan to go to 1/2 of that the next time. Maybe I'll try it with none in a week and see what I think. LOL  Stacia loved the dressing. Michael tried a bit of it. I ate the whole thing in the span of a couple of days. When one has a BIG BAG OF KALE to eat before it goes bad and they are the sole eater of said kale....one eats.

I water-sauted the kale with onion, garlic, cashews and balsamic vinegar for breakfast. Neah...o.k. but not wonderful. I threw it in a whole wheat tortilla and tried to convince myself it was a breakfast burrito. Neah - only made me miss the little breakfast burrito stand on Knickerbocker in San Angelo, Texas.

I brought back green smoothies...and the kids are happy to help me drink it - 2C of Kale a day. 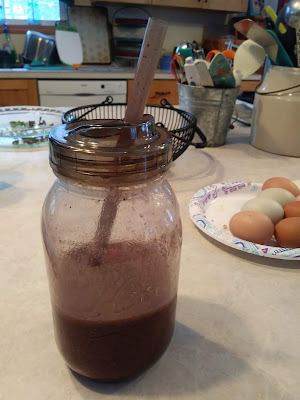 Sunday, I water sauted it with onion, garlic, ginger, cashews, a VEGAN sausage patty and added a 1/2 recipe of from the Kale/Quinoa/Tangerine salad above. It was good. Really good - with the sugar reduced even more. 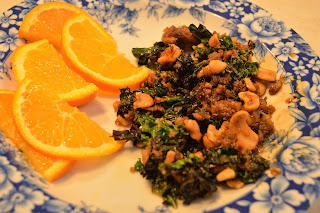 It started as a shopping mistake, but by George, I only have about 1 C of Kale left a week later. I found myself thinking, "I need to pick up some more Kale when I'm in town." :snort::

I need new Kale recipes...and Quinoa too for that matter. Feel free to share links.

Joyfully Penned by DeEtta @ Courageous Joy at 8:42 AM 2 Gracious thoughts