Lions and horses? and COWS! Oh my!

The base has been blessed with a wonderful holiday weekend. The 3rd and 4th were the weekend. When a holiday falls on a weekend we usually get Monday off. Our commander (or maybe it was Air Force wide) declared Tuesday a Family Day.  The head of our family is missing. I felt the mopes coming on - in myself and in various children.

Sunday night I determined we would NOT do school Monday and Tuesday and that we WOULD go do something fun and new to take our minds off of Michael celebrating America's freedom in the rock pile.

The littles wanted to go to the zoo....inspired by Debbie's zoo pics from Nebraska (::snort::) I agreed. For a brief moment I forgot I live in Japan. I went to google maps, typed in directions from Misawa to Morioka Zoo and got this...... 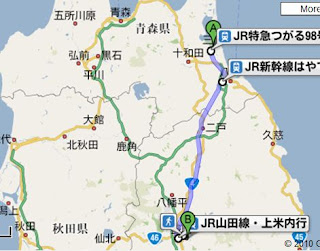 GPS units here are fairly pointless. Streets have no names. Our hand held work as we mark places when we ARRIVE and so we'll be able to find them again in the future. Maybe we'll sell the GPS with it's wayoints, when we leave, to a new family coming in. ::snort::

I had some directions that looked far to simple. (They were). I found some that looked VERY complicated (no toll road, lots of back roads). I have found the directions here to be better than ITT - and I usually end up where I'm going if I combine his driving directions with ITT directions.  We decided to head out.

The Stephey family, dear friends that they are, decided to go with us. Evidently they worried it was a rather long and uncertain trip to break in a new van. I learned the thing does NOT do hills as will as the other van.....and the AC dies when it gets going up hills....and the gas gauge I still can't quite figure out....but it was GREAT to get out on the roads and DRIVE. (Psst....don't let Windy tell you Rodney drives slow ::snort:: and they DID want to see the Zoo too.)

We followed Rodney. This gave me permission to drive over the speed limit. ::snort:: Honestly, the Japanese Gent, who taught the driving class for Jared, said the limit on the toll road is 80 kmh but they drive 110 kmh. They do.  We nearly did. OK - in some spots we did. ::grin::  It also allowed for various new driving adventures, such as:  u eys in busy intersections (I'm known to turn right and drive around the block rather than mess with a busy intersections - so a u ey in the midst of an intersection was an adventure). Windy rightly reports hearing a "terrified scream" as I flawlessly executed one such turn. ::snort:: I also drove on a sidewalk - with the kids encouraging, "Mom, that's the Japanese way."

At the toll booth I tried out my Japanese, "Zoo wa doco desu ka?" Of course, he didn't recognize the word Zoo. I tried various things......"Rrrrooooooaaarrr wa doco desu ka?" Finally, we simply drove on and trusted. We got there. Thank God for bi-lingual traffic signs.

Can't doubt you've found the zoo with a parking sign like this.
It's very common in Japan for ticket vending machines to be outside the "pay booth". You buy your ticket and in you go. Jared and I were y500 each, all else were free.
Oh the MONKEYS we saw!
I lugged the Nikon DSLR only to discover the battery was DEAD. Good thing for my pocket camera. Arielle and Noah
Animals of all kinds
Notice the joey
Petting Animals
African Animals
American Animals
American Children
It was a GREAT zoo. Bigger than the zoo in Anchorage (bigger animal variety too!), smaller than the San Antonio Zoo (Thank HEAVENS). The landscaping was gorgeous, there were no crowds, it was delightful.

This sign cracked us up. As Tony on FB noticed...good thing it didn't say no "snorting".
We had packed a lunch (still trying to eat clean and it works best when you can't read the menus and ingredients). We stopped at a mall's food court - well -
....and headed home.

The tolls are 50% off this summer...maybe they'll extend the rates forever?  It was y3400 total for tolls.

We were able to see the base's fireworks as we drove back into town....all in all a perfect day. I was thrilled that Rodney, Windy and kids were able to laugh about all the "adventures" and that we were able to make this memory.