I have previously blogged about the rice fields near our home.

This is harvest season. We've been following the progress with great interest during our morning walks and runs. Peeee-EWWWWW….. when the fields are clear they burn and put really rank smelling manure down….

This has yet to happen directly across from us, but I'm sure it is coming. We've seen it in fields on our drive to base and back.

Across from us the fields have turned from green to yellow. The paddies have been allowed to dry out for a few weeks. 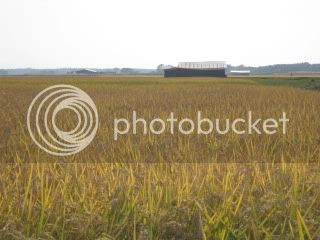 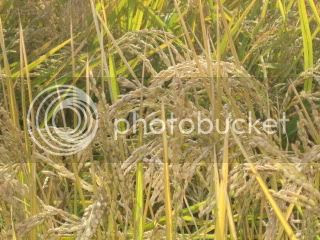 Saturday a man and woman turned up to cut the rice. 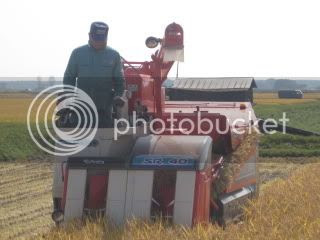 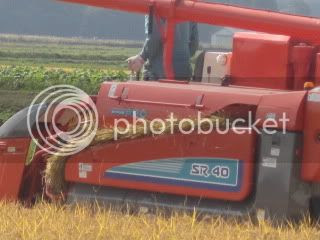 After the field is cut, they tie it into bundles and leave it standing in the field to dry. What happens if it rains? Hmmm… 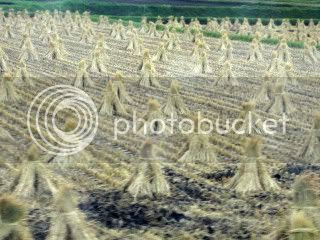 Jared read the next step is threshing the rice from these dried stalks. FINALLY, it is sent to a shop to be polished and bagged.

I was excited to find big bags of rice at the Farmer's Market. YOWZER the price was incredible. It was the equivalent of a bit more than $90 for 25 - 30 lbs. I suppose I'd best keep buying it in the 1lb bags from the commissary. ::snort::

Our lease says we will not wear shoes in our home.

I love this, really. The idea is not to mar the carpet or the wood floor. For me, I've discovered that there is something truly symbolic about leaving your "work" shoes at the door and donning fuzzy slippers. 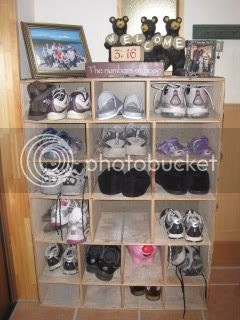 We have very slick wood floors (and steep stairs). I have been on the look out for slippers. Mike and I and the older two were able to find great slippers at the BX. We could find nothing for the little ones.

The other day while at Sanwado (think Wal-Mart), I was able to find 98 yen slippers. What a STEAL. I picked up three pairs for the little ones.

I was rewarded with squeals of delight at home. "Mine have Minnie on them!"

"Mine have angels on them!"

"Mine have a boy going to the toilet on them!" 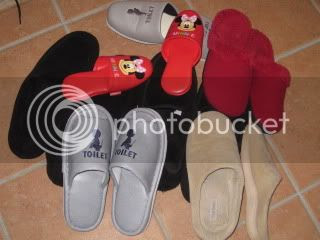 ::snort:: Ah…toilet slippers. Many homes here have slippers that are housed outside of the bathroom and used only to go into the toilet….I unintentionally bought the kids toilet slippers…. But they work.

I've been a bit sad to find that I only brought one teapot and two teacups. WHAT was I thinking? I also didn't bring a lot dishes. I remember that Bobbie Jo suggested I leave everything I didn't need in storage and buy things in Japan. GREAT idea….I plan to buy some teapots and tea cups here.

I NEED a roaster. I've had my eye on the Pampered Chef roaster for years but would never spend the $.

I was in Homac Saturday, looking for shelves and a roaster, and found THIS. I'm not sure what it's meant to cook. I had to figure out how to ask if it could go in the oven, because I couldn't read the box, and the ladies said it would be o.k. 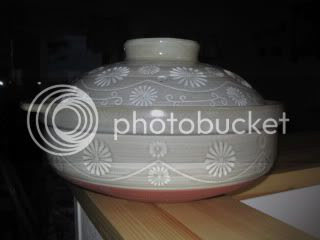 Isn't it great? It's big, worked great and is Japanese….and cheaper than what I was looking at in America. I'm satisfied. There are matching small dishes I can buy to go with it….maybe they're for rice or ramen? I could do a whole post about the great dishes around here.

Kim, I'll be emailing you the box so you and Ryu can tell me if there are any special care instructions I should know about. ::snort::
Choosing Joy!
©2009 D.R.G.

I'm excited. Every morning as I walk, I pray. I've asked God to give me His heart for our Japanese neighbors. I've spent some days in tears at the realization that less than 1% of the people in this country know Jesus. It's breathtaking. It's heartbreaking. It's unfathomable. We so badly want to make contact with the few Japanese neighbors in the area. One is the farmer who has horses behind our home. He has "posted" signs in ENGLISH, rope barricades and fences. I have been trying to find someone Japanese to ask if it would be culturally brutish to ignore the ropes to take them something baked and a note.

Last week Zander began to walk with me. I'm working to teach him a bit of tact with his zeal. He told one sweet lady, "I'm sorry that you are wrong about God. There is one true and living God and His name is Jesus, you have to know Him so that you can go to heaven." I'm fairly sure she didn't understand his conversation, and Zander is now determined to learn Japanese. Anyway, his theology is fairly sound….but I want to find a gentler way to communicate Christ's love. I've had quite a few thoughts, I'd love to dialog and blog about….but no Internet. ::snort::

ANYWHO….last week one farmer and his wife (?) fell in love with Zander. Oh, it's a trial for a boy with his particular alphabet labels to have strangers talking to him, rubbing his hair and such…Social situations are difficult for him when he can understand the language. He's doing great. He did pull his hood tight at one point and said, "I think she may steal me if she sees much more of my blonde hair." ::snort:: ::gasp:: ::chortle:: He's done well….and tried out his few phrases several times.

We are always careful not to broach the farmer's ropes etc. We HAVE discovered a pond behind us. We can reach it without crossing his boundaries….and we are careful not to approach any closer than the fence allows. I was nervous today to see the farmer out during our walk. His wife, earlier, had made it clear that they are leery of all the new Americans. He stayed out while we watched ducks and talked. As we headed back to our home, he stepped into the road.

I said, "Ohiyogozaimasu". He responded. He motioned us close.

He told us to "touch" the ponies he had. We communicated…as best we could. I learned the ponies are 4 years old, he KNEW where we lived, he owns the horses behind us, he invited us to walk to the corral with the ponies…AND :::drum roll::: he told us we can fish for "big BASS" in his pond…but "caution". I think he told us he is the landlord…but we may not have communicated that word right. I KNOW that he owned the land that has been built upon.

He said much more and I said, "Summimasen, Nihongo ga wakarimassen "."Excuse me, I'm sorry, I don't understand Japanese." He smiled big, laughed and said, "skoshi anatawa wakarimasu!" You understand a little. I laughed. I told him (in English) that we are trying to learn Japanese.

Zander yelled, "Sayonara," as we left…when we turned the corner our farmer was waving at us.

I was so excited that we called Mike, on the cell I carry since spraining my ankle last week. We also stopped to share with Windy on the way home. We've been praying to broach the silence. We have three years to live Jesus before our farmer. I pray we are an accurate example of His life and love. I'll bake something to take over. I've been composing a letter in my mind…..I need to get out the dictionary and try to get into Japanese what we want to say to go with the baked goods. Better yet, I'm trying to make contact with Akiko to begin our one on one language lessons. I bet she would translate it.

Still, God gently reminds me that though my less polite American neighbors have had the advantage of hearing of Him…I need the same zeal to live Him out before them.

I'll capture my thoughts daily in Word, and post all the qued entries when I'm around a connection….instead of dreaming of a connection to post daily and losing our first thoughts and impressions of our new home. This seems the best way to keep the family journal current with the present Internet limitations.

We were told last week it will be another 3 - 4 weeks until phone and Internet are installed. All our others neighbors have been told late November/December. I'm guessing they didn't want to tell us how much longer it would be. I was a bit desperate when they called last week to tell me they had no idea how long it would be. "PLEASE find out why the telephone company isn't calling us. I need to talk to my babies in America." ::snort::

I have found a few wifi connections out in this area….but I don't want to make over use of them. I WAS able to finally talk to the girls, Mom and Dad G and my parents this weekend. It was good.

~Today is Tuesday. I'm up here for PWOC, a conference call, compliling this week's Protestant News and Middle school drama. I have six blog posts to upload...We've also tried to buy printer ink, a camera battery charger, a CD player and printer paper - but ALL WERE OUT OF STOCK! ::snort:: On with my work and I'll upload posts in between.