This has been an incredibly exhausting week.....at home, at work, at chapel....

Today I took Jared to the doctor - Pink Eye. Prayers that it is contained are welcome.

Multi-tasking even with Pink Eye (draining one batch of pasta, stirring the other) 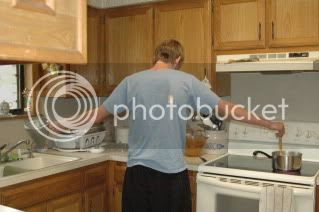 We did some school. I posted a Titus 2 Tidbit on the regional PWOC blog, posted some things on the local PWOC blog, sent out all the info to remove myself as United co-op coordinator. Well....posts below detail the day.

I've now listened to the first 30 min Japanese lesson twice. I think I can say, "excuse me", "Do you understand English", "I don't understand Japanese", "yes" and "no". LOL 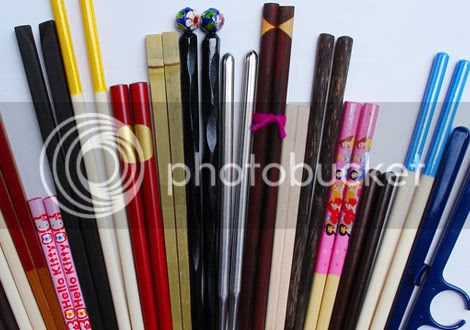 Our friends, Doug and Deja, showed me these cool chopsticks one day. Fearing we'd starve in Tokyo before we reached the base in the north, I bought some for our carry-on bags. ::silly me:: They arrived today.....and the children couldn't wait to try them out at dinner. Do you see where this is going???? 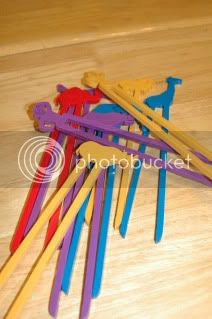 This is FRIDAY night - PIZZA night! 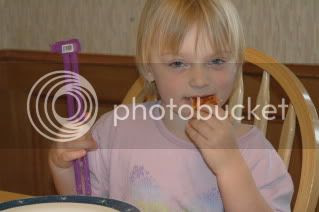 This little girl is not exhibiting the proper way to use chopsticks.

{Remember, these are "facts" from books....Yes, we are making a chopstick book for our Japan Lapbook. ::snort::}

Stylin in the Exam Room

The "work" week began with my yearly exam and ended with a mammogram. My word - does it get much better than this? ::snort::

Monday began with quite a conversation with the nurse on base about the number of pregnancies I've had (17) and the number of children I have (9) and the fact that she wants to have a large family....and of course wondered if I had any tips on how to find a good man. ::snort::

I'll be discreet (as I know some men out there do read - if only my dh and sons)...but it HAS to be a man who designed the exam gowns used by the Air Force. 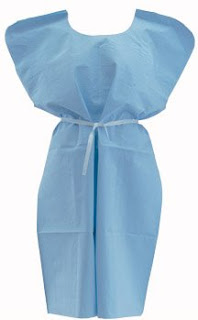 "Take all your clothes off and put this on, open in front."

There were no holes for my head or arms...though they did remember to split it up the front.... it looked like some sort of deranged burqa. There was no way I was sitting on the table in a gown that covered my head and opened....well picture the problem yourself.

Who would have guessed? Is it too much work to pay someone to cut out a neckline and armholes????? I've sense realized that maybe this gown was a defective one from the top of the box? I checked for a photo like it and can't find one....Oh well....I tore and ripped...and must say that when I was done I had nice lapels and tucks at the waist. I even doodled on the lapels. It was art. The doc and nurse loved it. I thought of whipping out my camera and taking a photo...but decided against it.

The AF has specific time lines for preventative maintenance tests. I have family history. I have little children. I'm responsible. I began mammograms ahead of the timeline, so to speak. I asked on Monday if I would ever reach a point where they say, "OK, we have a library of films on her...we can relax...come back next year..." but NOOOOO....off they sent me to schedule a mammogram. I had one within the week. I'm really praying they don't call me for a recheck....which is what they usually do. Probably because I'm so much fun in an exam room.

ANYWAY....at the local imaging center, The gown was CLOTH and had real snaps, a hemmed neckline and armholes....is this the way all civilian offices are? I am truly impressed. I'll spare you the details of the test itself. For those who have not had one, it's not as terrible as you hear...sort of like all those labor stories women like to share. ::snort:: My test was slightly better than this one.

I did think it strange that as I was fully disclosed the x-ray tech began to ask me for parenting advice. Of course, she'd seen the numbers of children et al.

Having a mammogram is always emotional for me. It's silly, I know. Having a mammogram makes me think of my grandmother and my aunt...and it makes me sad...though I know they are both happy in heaven. For all the joking in the exam room, I always cry in the parking lot...and more than that I thank God for the godly legacy of Kathryn and Virginia T.

Since Mike ended up working on his day off today, I did NOT have to do immunizations and for that I AM thankful. ::snort:: Since I was emotional anyway, I came home and sent out an, "I'm no longer your United co-op leader" email and cried to think that we are leaving HERE......and remembered that a few short years ago I didn't think San Angelo would ever be HOME. LOL