Stacia and I made the centers for 12 dozen Buckeyes....tomorrow we'll dip them all. 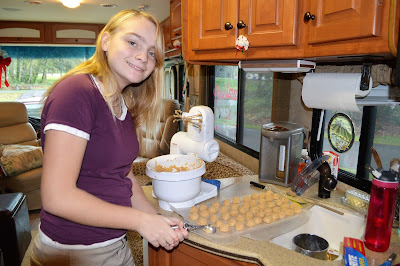 We also tried this Peanut Butter Cup Crack Brownie  recipe....and they are good...but as you can see my micro/convection oven never did BAKE the brownies. Grrr.....The kids still love them and I do think if I remembered to put the aluminum foil down and went and used a REAL oven - these have wedding potential.  I welcome any tips on baking with a micro/convection oven. The biscuits worked - didn't brown but DID bake. The pizza was doughy in the center. The brownies you can see....I have no oven. I need to figure this out. 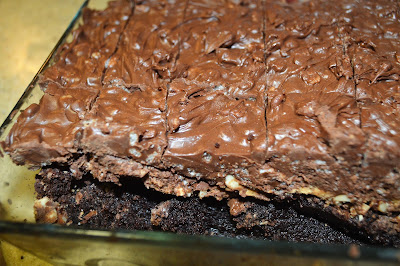 I had a nice talk with one of the camp hosts. He stopped to see how Stacia and I were doing. I haven't a clue how he knew the guys were gone. He is a retired, disabled, Desert Storm Army vet. The guys are home! They accomplished a lot and brought things up Mom G needs for her unexpected stay in OR. Thank God for families...for the way it is working out that we need to get care in the same town where Michael's sister lives and we can still visit with Mom G. It will make this transition much easier for the kids. 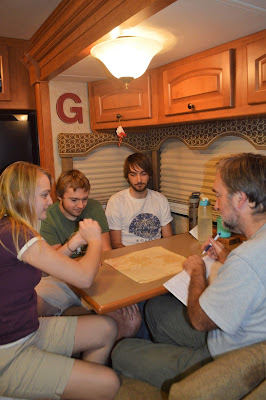 Some have read between the lines and sensed another plot adjustment in our ongoing saga.

Several months ago, the therapists Michael was referred to by the Motion Disorder Clinic in Portland, recommended they see him weekly and/or 2-3x a week. We explained that was impossible. We settled on monthly. Before our cruise the speech/swallowing therapist made clear she felt we were wasting a window of potential in fighting the progression of Michael's Parkinson's symptoms.  We understood, but saw no way out of our situation. We were needed in Crescent City.

I reported Michael's week at the VA last week - 5 appointments in 4 days. It was noted  some muscle tone was taking an unwanted turn. The physical therapist said she would be much happier to see Michael weekly. She feels he would benefit more at this point from more frequent torture in person.

The  first of two  appointments with the speech therapist this week consisted of her spending 45 minutes explaining to us exactly WHY she felt so strongly Michael should be seen 2 - 3x a week and why she felt we needed to leave CA and stay in OR. He is already aspirating and having trouble with swallowing. This will progress. We can try to control the speed of progression with intensive therapy. If we wait 6 months, a year or two....well pureed food doesn't sound desirable...and once muscle tone or nerve function is lost - it's not replaced. She was very blunt and pointed. She told us we needed to think about MICHAEL and quit putting everyone else's needs first.

She asked, "Why is this decision so hard for you?"

We explained our family world view. We serve. Michael's career was about putting others above self. He does the same as a father, son, and husband - a good one. It's not natural to begin to put yourself first in all decisions.

She finally pulled out the big guns - one several of these VA docs have pulled in the past year. "Chaplain, if someone came into your office and had a degenerative disease, was showing increasing symptoms and had a window to try to slow the progression....but was taking care of his mother...and still had children at home, was fairly young himself and was risking losing function that would not be regained,  what would you advise?"

We aren't sure how this is all going to work out, but we know we have to make the most of this window. We have to do what the docs have been encouraging. We have to make Michael's health our priority.

What this looks like in December is we're all up here in Oregon. Mom G is staying with Michael's sister.  We are busy with therapy (and  will only get busier), we plan to go visit with Mom G during the days. We have a wedding and Christmas. We're figuring this out as we go.

We have agreed we need to make a season of intensive therapy our priority right now.

We are currently in a county park. We are only allowed to stay here 14 days every 30 days. We are not finding a good spot for an extended stay, but we'll keep looking and we are set up to be able to live on the side of a road if need be for 16 days out of the month.😉  We leave this park on the 10th and are looking at local options.