Stacia - It seems I may have confused some about the shots we refuse...we refuse the social shots. There is simply no need for our children to have them. If the Air Force felt we needed them, we'd discuss it further. We've inquired about what is needed for Japan - no worries there. We would never knowingly put our children at risk. The shots themselves, however, are a risk for Stacia.

Here's a bit more info so y'all don't think I'm simply a needle hating mother (which I am). LOL Our base has a walk in immunization clinic. You don't see a doc before hand. Stacia had a reacation to her 6 month shots. She had the fever, swelling etc...that is NORMAL and not a reaction...she also had a rash and hives...which I'm told is not normal. Our peditrician knew that we were concerned about the suspected autism connection to shots. After the 6 month shots she was concerned about the reaction and suggested we hold off on shots until Stacia was "older". We thought 2 - 3. Today the Sgt., who is well known for being great at her job, looked it all up and said we could wait longer if we'd like. SHE would have been more at ease if we waited until Stacia was 4....but Stacia was there and ready....and we felt it would be o.k.

We've been told that you don't have a say on shot schedules and combon shots in the Air Force. Not true. I wanted Mike there as so many had told me they would NOT split up the shots. Imagine my surprise when they INSISTED it would be safer to split up the combo DTAP shot into three shots....they also advised that she only get ONE shot at a time...so that if she has another reaction we'll know which one it is and she'll not get it again. The concern is that the swelling could spread to air passages...and I guess the concern (which we didn't know about until today) is that her next reaction will be stronger than the first one. We know which ones she had at 6 months....it was the Dtap and some other one I can't pronounce, but she didn't get it this time.

She had one shot. We waited for 20 minutes. I'm watching her. She doesn't have a rash, swelling or hives...so I think she is fine. I think it would have hit earlier if she was going to have a reaction. It's not been 8 hours.

She will have another shot in a month. It will take a long time for her to be caught up....but all feel this is the safest way to immunize her and be sure that she doesn't have a serious reaction. Long story short - yes - not having immunizations can keep you from some overseas clearnaces....but it isn't that she isn't having any....we have good reasons for her being behind schedule. She's never had an MMR and won't before Japan...BUT her records clearly state that she not be given combo shots and that she get one at a time....they also state why. She's already cleared for Japan. We've been told that this is not a problem as they have immunization clinics at all the bases in Japan.

I feel sad for her having to do them one shot every month....but I am MUCH more at peace with her getting one shot, rather than 5, at a time.

Mike didn't come with us, but the kids and I ventured out to our first political protest....and we had a blast! ::snort:: 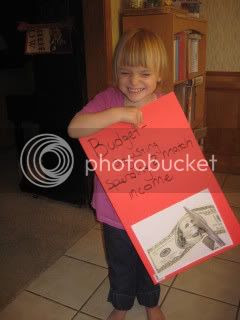 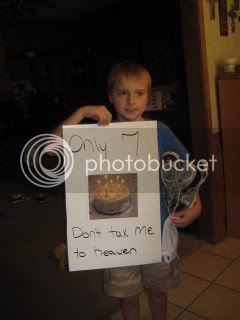 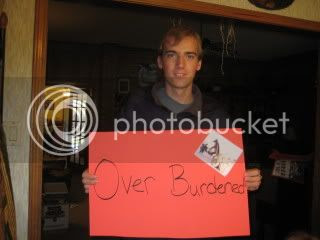 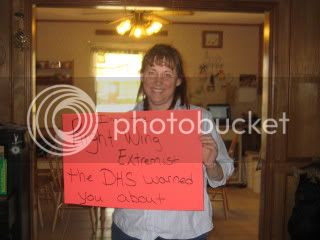 Nolan's sign says, "I'm not the Government's ATM".....and there are other photos of the younger ones signs... 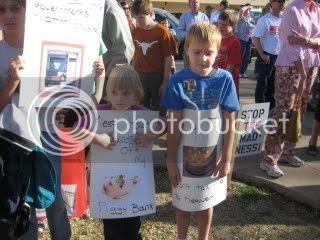 About a week ago they announced this TEA party....then a few days ago they announced a "Support the President Rally" at the same time and place. I wondered about going but the older boys really wanted to go. I suspected I'd be taking the kids alone due to Mike's work schedule. I thought there would be more supporters than tea party goers....but wow! There were 25 Obama/Biden supporters when I counted....I'm not sure how many for the TEA party but the lawn was full of people. 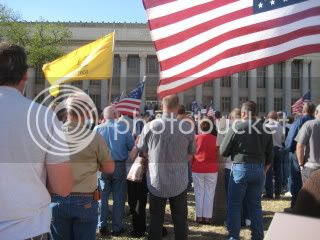 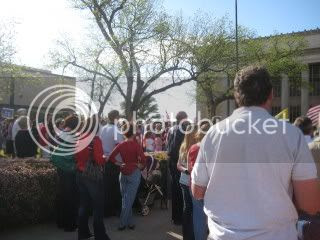 Stacia will be in several folks' photo albums of the event....folks kept asking if they could take her photo. (The boys tell me that someone else thinks like me and their sign was on Hannity). ::snort:: 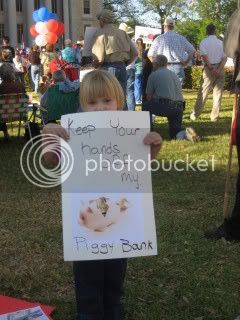 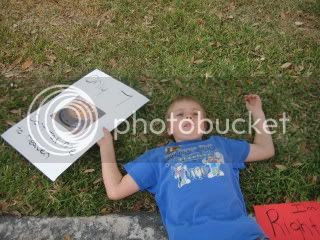 It was beautiful weather. It was encouraging to see so many turn out. It was all fairly positive and uplifting...no President bashing...very nicely done. Stacia asked if we can go to a tea party again tomorrow. LOL

The day began at 3 a.m. I had volunteered to head up the Parish breakfast. It seemed like a good idea at the time....::snort:: It all turned out well. I had lots of help.
We rushed home after the breakfast to pick up children....
Ready for chapel service #2.... 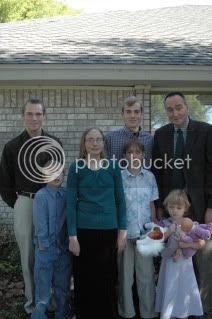 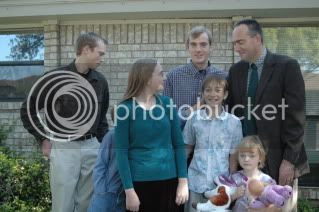 After lunch we kept working.....
This young man does all his work with a joyful heart. ::snort:: 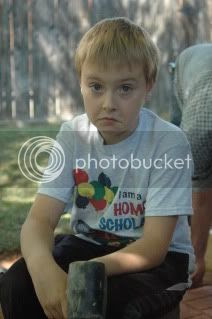 Josiah said he was glad to help Mike extend this brick "patio" - it made him feel that he was part of the move and helping us out. 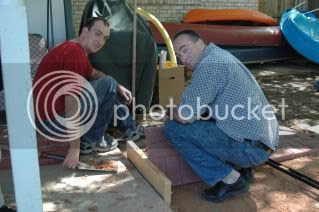 This is much nicer. The previous owner had installed some brick...this brings it out to match the patio and the sod will grow up to it. 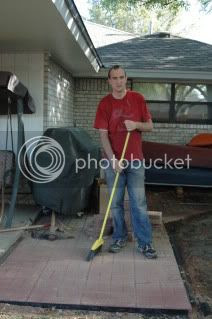 Joyfully Penned by DeEtta @ Courageous Joy at 9:18 AM 3 Gracious thoughts

Can we PLEASE go get shots?

Zander is convinced that his shots are not going to sting because he's spent the week praying to God about this. The older 3 got shots yesterday, but immunization won't do children under 10 and peds wasn't open.

Zander has maneuvered a trip to the bowling alley after shots...OUCH - WHY????? and so he's pestering me to go get shots today.

Will my child ever trust me again after this? I haven't said it won't hurt. This will be Stacia's first "conscious shots" - it's time. Mike will be there...and when HE tells them we don't want X shot - they listen. They tell ME that my wishes are illegal. ::snort:: I think it's the menacing eyebrow.... Yes, we are responsible adults. We chose not to immunize Stacia when she was young because she had a reaction to one shot and we worried about autism. The base pediatrician suggested we wait until she was 2 or 3 to give her further shots...she's 3 1/2 now. However, I KNOW they will need Mike to hold her down...she doesn't take things she doesn't like passively. Wonder WHERE she got that trait? ::snort::

Joyfully Penned by DeEtta @ Courageous Joy at 8:51 AM 5 Gracious thoughts

There's a Wasp in my Shower!

He was as surprised as I to share our close a.m. quarters.

My typical method of dealing with surprising animals, screaming for a young man, was not going to work in this situation.

I was not about to let him keep zipping around me in my vulnerable state. I killed that wasp with a Mary K Timewise Cleanser bottle.

I feel empowered to face the day.

Joyfully Penned by DeEtta @ Courageous Joy at 5:49 AM 4 Gracious thoughts