FRESH ORGANIC Produce - We Did a Thing

One of the "hard" things about living in Alaska is the lack of fresh produce.  Long time readers will know I have RUN produce co-ops in both San Antonio and San Angelo, TX.  Our last assignment was in the farm-belt of CA. I was vegan for 9 years. We ate CASES of produce in these places....and then we moved here. The prices are high....but the produce doesn't taste very good. We found ourselves not wanting to EAT the produce we spent exorbitant amounts of dollars to buy. Things are either on the edge of going bad or its obvious they were picked, and shipped, green or frozen.....

Months ago I heard about Wholesome Food Coop which operates here in the Valley. I joined the Facebook group. I got OVERWHELMED. They order from Azure Standard, Frontier, Equal Exchange, Locally sourced, and Organically Grown Company.  I watched the announcements come and go and put the idea on the back burner. I waited for a time when I could make sense of all the ordering procedures.

BUT they began something called a Fresh Produce Pack. One simply gives them $39.99 plus  20% and receives a bag of organic produce. The order is due the  first  and third Tuesdays of the month and pick up is the second and fourth Tuesdays. WAIT...that means the produce will be no more than  6 days out of the warehouse when we receive it. FRESH.  I didn't want to pay a lot extra for organic, but four years after moving to Alaska, I AM willing to pay higher prices for FRESH....I decided to get one pack and see what we thought. I ordered. Tuesday, 27 Apr we picked up our first order. 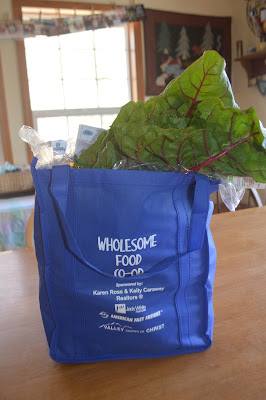 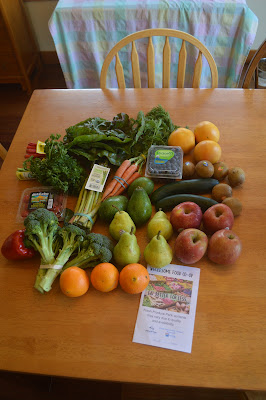 When I went online to order, I was reminded the supplier is Organically Grown Company. Michael's sister, Rebecca, has worked at OGC for at least 30 years. I texted her and she shared they pick the freshest produce to send to their Alaska customers as it has the furthest to go. I did the math. Our order closes on Tuesday. It would be put in on Wed and would ship shortly after that. We pick up 7 days after our order closes. I am sure, other than growing or finding a local source, this will be the freshest I can get.    We have BEEN in this warehouse. We've eaten many yummy offerings from this company. They are in Eugene, OR and I knew I'd be hard pressed to find fresher.  I looked around the split orders a bit. I decided to add my name to a few splits as I knew the produce pack was probably not enough for us. The prices were much CHEAPER than what I pay for produce locally. I FORGOT there would be a per pound shipping fee AND a 20% co-op handing fee added...in the end I may have paid the same but it's FRESH and ORGANIC. I don't buy organic locally, I can't afford it.

I noted the co-op fee can be lowered and nearly waived if one volunteers. I've run produce co-ops and natural food co-ops...I decided 3 hours at pickup would be a good way to see what is ordered and how this group operates, and bring the handling fee down for next quarter.  Allie got done with school early and joined me. We counted the sorting as 3 hours of strength and cardio....she hauled the heavy boxes and we certainly did run back and forth a lot. I got 10K steps. We had a fairly good time and were welcomed as heroes when we came home with our loot. 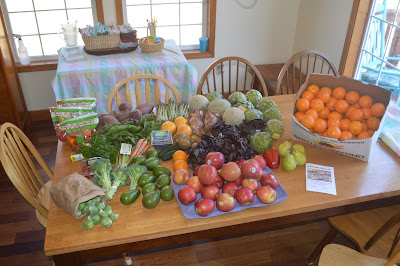 I am, once again, decorating with fresh produce. Is there anything prettier?

Y'all - I can't explain what has happened around here, people are EATING produce again. The oranges are SWEET and juicy. The cantaloupes are ORANGE and sweet. The avocados have NO BROWN SPOTS and are perfect. The apples are CRISP and FLAVORFUL. I'm not sure what to do with the Swiss Chard. My one mishap is my pepper purchase. I THOUGHT to get 3 bell peppers...I ended up with 3 bags of mini peppers.  ::snort::

We ate all the broccoli and one of the cantaloupes the first night. We've been enjoying lots of veggies and fruit this week.....Doc picked a good time to tell me to get 30 grams of fiber a day. Goodbye, Fiber drink.

I tried avocado toast - freshly squeezed juice and a fresh organic egg too. Dad, Allie and I like it. 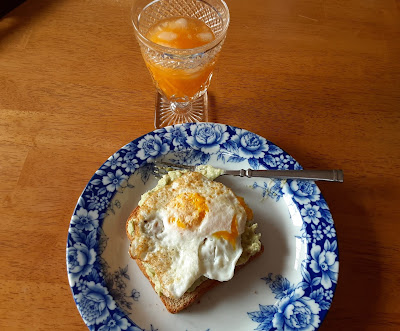 Michael loves Brussel Sprouts - we have this many more left for next week. The rest of us are sort of neutral on these things.... 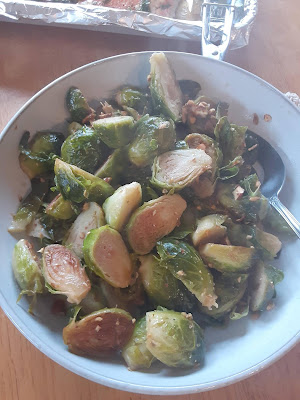 The salmon was topped with fresh parsley - and I used 1/2 our asparagus...yummy fruit.... 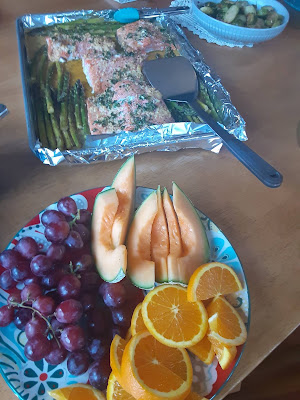 Burn the Portabella's she said - so I did. We got 4.  I baked them, froze them and will grill them when we have burger burns. We ate one and it was good...not marvelous but I think it will be when I grill them. LOL  I ordered more to get more than 3 in the freezer. 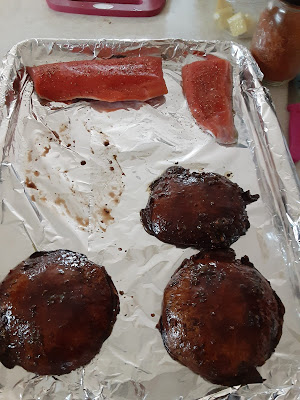 I pressed bread crumbs into an avocado, spritzed it with oil, salt and pepper and tossed it in the air fryer for 7 minutes at about 350...then filled it with salmon salad. Stacia and I loved them. No one else has tried them yet. Michael doesn't like avocados, but then we don't love Brussel Sprouts...give and take people. 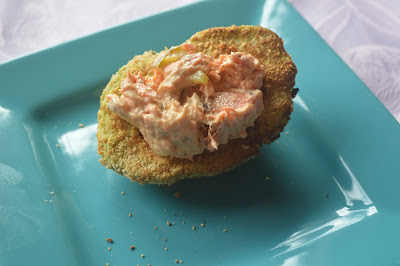 The parsley won't stay fresh forever and we didn't need a ton of garnish, so I dried it. 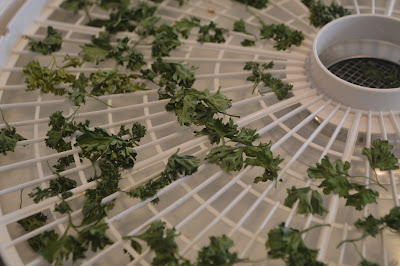 And then I asked the girls to make guacamole to go with the pizza - it seemed to work...and one thing led to another and now we have one lonely avocado left. We THOUGHT we'd have so many we would have to give them away. 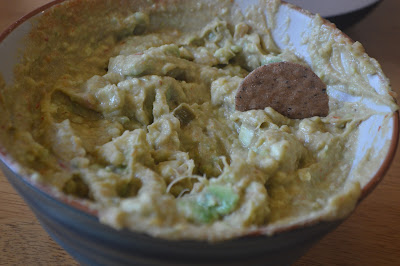 I've been working on the Azure Standard order. I have to submit that tonight....and the produce order for 11 May is open until Tuesday night....so I'm trying to guess how much we will eat in the next 11 days....and put in our second order.
I've signed up to work every pick up so by next quarter our 20% co-op fee will be 75% waived.

Joyfully Penned by DeEtta @ Courageous Joy at 7:20 AM 2 Gracious thoughts