Errands in a 38 ft Motor Home

Michael's  fifth and final appointment of the week at the Eugene VA Clinic. We really like his care team and this clinic. We were asked again if we'd acted on recommendation - we will, we will.

Michael is trying to do a few repairs.  We knew the drain in the bathroom was showing some rust. It is also leaking a bit. He bought a drain and it had an overflow and won't work. He's been looking all over town to find the drain that WILL work. We also needed to fill our propane tank - and it's attached to the motor home.  Appointments were over at 0900. We were relieved to have more time in Eugene, where we have a better chance of finding the parts we need. Off we went to 1. fill the tank and 2. check out a couple of RV parks as we can only stay here 14 days.

Doesn't everyone take along their Christmas tree in the kitchen sink when they run errands????
We filled the propane tank, weighed the motor home now that we have everything in it, stopped and talked to the owners at a local RV park, I called several others while Michael ran into RV Supply, we also went to Camping World - neither place had the drain we need. He did get a new water filter for the kitchen sink. We were hoping it would increase the water pressure. It didn't, but the water tastes wonderful.

The kids made dinner.

They settled in to stream a Netflix flick. The new TV is wonderful. While they did this Michael and I hung the remaining photos et al. YES - I'm a military spouse at heart - you move; you organize and you hang the photos quickly. Day 5 and we're all settled, pictures hung....now we can work on the modifications and repairs.

We found the kids relaxing when we finished..... 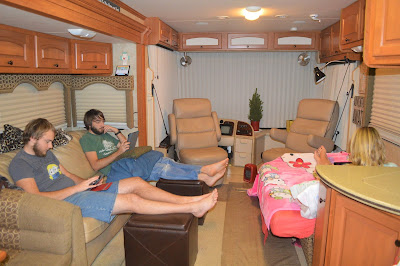 Played Farkle - I won in my sleep again. Alex won the second game. 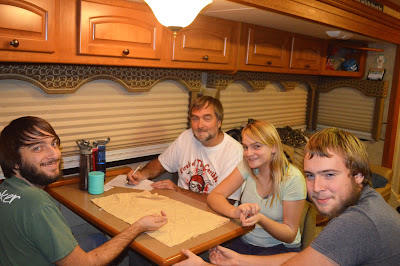 We're ending the day with books....and plans for tomorrow, the first day without any appointments at the VA clinic.