These two stay warm and cozy inside - the snow isn't bothering them! It's fun to watch their personalities develop. Bella loves reading to Gideon..... 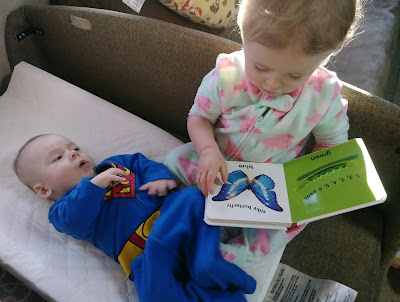 More snow....they got more in Anchorage and Eagle River - but I'm sure we met with the snow with more zeal. LOL 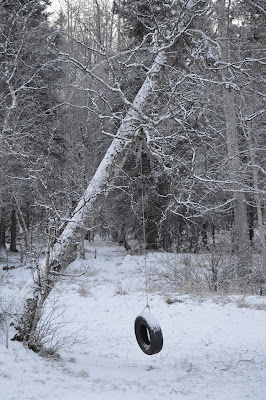 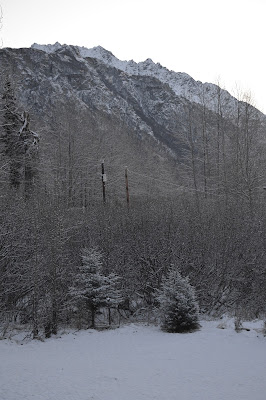 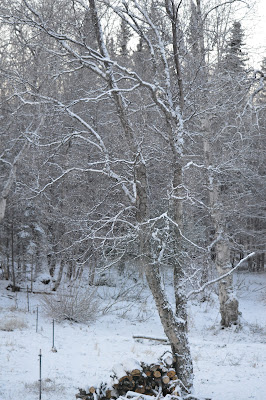 The power company stopped by to say these trees were planted 5 feet to close to the power lines. They will be by in a day or two to take 3 feet off the top of the two biggest ones. WE  will plant another row 7-10 feet closer to the house....and they will be back in the next cycle and will take all the trees out. Ugh.  I had thought we would just begin using the trees for Christmas Trees....but they are TALL!  We are going to transplant a couple of the smaller ones....and then we'd like to plant new trees every year - and harvest our own each year. 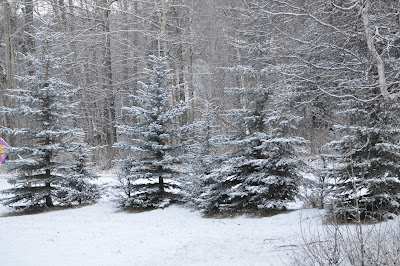 We've talked to Lowes and Home Depot and they say they don't get blue spruce in at Christmas time. They get potted pines....but they can't survive the winter! WHAT???? Our plan was to buy a mid-sized spruce, use it and then plant it in the spring.....from looking around our place we can tell the spruce will do just fine here.  We may not get to use a live tree this year.....just go in the woods and cut one....

Since the weather is dipping into single digits - it's now winter. LOL

This was a college friend, Beth's, Cobbler Recipe. These were quite popular in the 80's.  It was a blessing to reconnect with Beth via our virtual Bible study before she passed away.  Her sister in law, Cynthia, (also a friend) posted this in her honor. I found myself nostalgic earlier in the month and this was just the thing to make for a Sunday family dinner. You can read Cindy's tribute and post here. 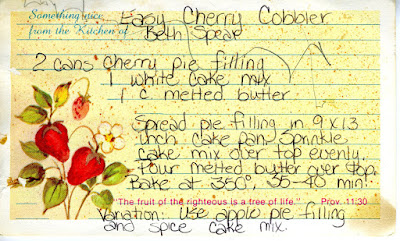 I used apple pie and spice cake. My family wasn't crazy about it- but it WAS ice cream night and it's hard to move them from ice cream. I inadvertently accomplished that task last week when I served Dark Chocolate Mousse with dinner.....everyone was so satisfied they didn't move on to the ice cream portion of the evening.

Joyfully Penned by DeEtta @ Courageous Joy at 6:56 AM 0 Gracious thoughts

So many had suggested King Ranch Chicken for our family dinners that I thought of it when I needed something for the church potluck.  I wasn't sure how much warming space the church had, so I made it ahead in the Instant Pot using the slow cooker function, and kept it warming through service.

I found the recipe at Six Sisters Stuff. Check them out. How have I missed them? They have cookbooks and everything. LOL  This worked well - though the chips on the bottom stuck - I'm sure due to the extended warming time. We were half-way through the potluck when I realized I'd brought something to a potluck which I'd never tasted. The kids assured me it was good and it was gone....so I'm guessing it was - or there weren't many options. ::snort::  I used the 6 qt pot.

Spread a layer of tortilla chips in the crock pot to cover the bottom. (It's ok if they are overlapping.)

Place half of the chicken mixture on top of the chips.

Then top with half of the cheese.

Cook on low for 4 hours or high for 3 hours.

Joyfully Penned by DeEtta @ Courageous Joy at 6:46 AM 0 Gracious thoughts

I made this for last Sunday's family dinner. It was a hit. HOWEVER,  we felt the serving size was too big....this is RICH. I found this recipe in "Bread and Wine," by Shauna Niequest. This charming book is worth the purchase. Check it out from the library first if you want to verify my opinion.

The most challenging part of this recipe was NOT eating the chocolate as it melted.... 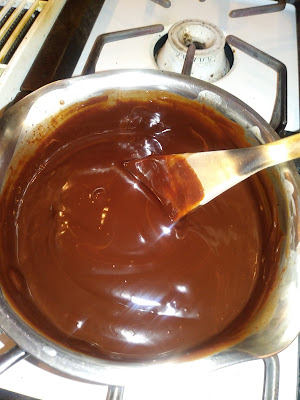 Just in case it's too hard to cook from the above photo:

DIRECTIONS:
Stir 3/4 C cream, chocolate and honey over low heat in a saucepan until smooth. Cool for a few minutes.

Fold in chocolate in two batches.

Chill for at least 2 hours - really.

Joyfully Penned by DeEtta @ Courageous Joy at 6:00 AM 0 Gracious thoughts