(Photo Removed)
He's not making jokes any longer.....and he's nauseated. He's done so well...didn't freak out....handling the pain well....but keep praying. I have never had mine out, but I can't imagine throwing up would be a good thing.
Choosing Joy!
©2010 D.R.G.
~Coram Deo~
Living all of life before the face of God...

Seven months ago, while were thriving in the TLFs...the children planted small plants to give them hope that someday we'd have a home to put them in.

The miracle is: we have a beautiful home that houses us all quite comfortably, our yard has come to feel HUGE as we adapt to what is typical in Japan, and we have not killed the plants. Maybe, having the kids take ownership of these plants has broken the curse of  my "black thumb". 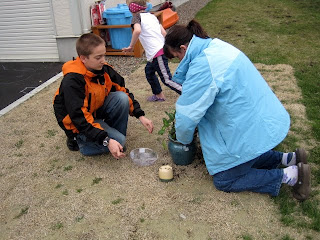 Look how the plants have grown.... 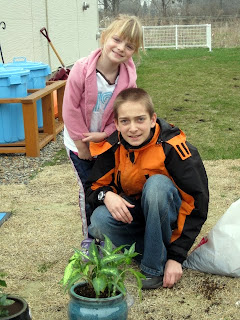 Actually...look how Zander has grown in 7 months! 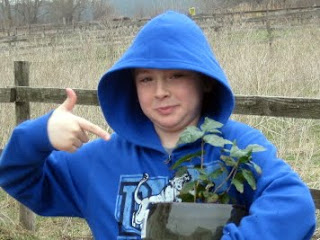 Will he remember? Maybe not...so I'd best blog it. I'm sure he'll be fine with that as HE was snapping photos of himself. ::snort:: Yes, HE took these photos.

On the way to the clinic, he seemed remarkably calm and in good spirits. I think talking to Dad for 30 min last night helped.

We checked him in. I went to wait....and pick up meds....and do Bible study...and make retreat lists....and read a new book.....and then the nurse came out sporting a big smile.

We were told when Jared had his tonsils out to remember that he is a "violent drunk".  Well - something HAPPENED. I'd warned them, they were prepared.  I worried  a bit about his actions under the drugs, given Michael's recent post on sanctification.

BUT....this kid was happy, friendly, cracking jokes, making expansive gestures....the nurse put him in the wheelchair and he was raising his arms high and pretending to be on  a roller coaster, complete with noises. They had a great time with him. I said, "OK, Jared, settle down!"

I was  told to keep him quiet and not let him talk. Yeah. RIGHT. He was cracking one joke after another. He did wake up a couple of times during the surgery. NONE of the older four wanted to socialize after they had their wisdom teeth pulled. I HAD to go check Michael's office one more time. I left Jared in the car with a stern warning, "Don't get out, don't talk, don't sing, don't move...just stay".  He did...but took pictures.

I promised him he'll look worse on Day 2 - swelling and such. I think he wanted a terrible photo. It will come. He's upstairs. I MADE him take the Percocet....I've got to knock him out or he will NOT sit still. ::snort::  I love this kid.  (Yes, dears, I love you all!)

We're keeping a quiet house, working on school, drugging Jared and hoping that he recovers quickly.

We're heading to the clinic in an hour for Jared to have his wisdom teeth removed.  Prayers for a smooth extraction and recovery are appreciated.

Yesterday was full. School. We're studying the early 1800's now and loving it. We've spent last week and this week looking at William Wilberforce! What a hero.

I was able to move the big "car tax event" from Tuesday to Friday, as I'll be busy with Jared today.

My laundry has not blown over for four days.

We spent a considerable amount of time looking for Michael's "Medal Dec" from GAFB. It would appear that it was lost somewhere between being awarded and showing up in Michael's official record. He goes up for a promotion board "soon", July, I think.  It's important to have it in there. I'm looking...not finding at this point, but diligently looking. This whole situation could be a matter for prayer too. One that God would have His will with the promotion board. Our heart is always to minister...we won't be crushed if our time in the military is over....but we want to know that GOD is the deciding factor and not heartburn from a promotion board. KWIM?  When Michael was promoted to Major, our Command Chaplain told me I was the most "unhappy looking" spouse he'd ever given the news too. I shared that we had a Plan B and Plan B looked very promising to me......Plan B still looks good, though I've come to love Plan A - the Military. LOL

I have been blessed to work with a wonderful group of local ladies as they plan their upcoming spring retreat. Specifically, Windy, has stepped in to handle many of the registration details. She is also graciously helping me however she can as I work to get details off my plate now that I'm the speaker. LOL

I met with Twyla, our retreat supply guru, last night. We helped each other get a clear picture of what my session assistants will be responsible for and what supplies she will buy and organize. We topped it off with a quick trip to the BX to start looking for goodies.

Then it was time to pick up Jared and Arielle at chapel. They'd been to Human Video Team practice and then Cross Training (youth).
Since the day was going to be busy I made Nikujaga for lunch...and that worked well to have our main meal at noon. Again, the comment was made that it would be best with "all beef"...and again I explained that in Japan the meat is a condiment. The photo just doesn't do justice for how good this tastes.