Bees in the Capris are worse than Ants in Your Pants

What a great day with the family.  Of all the things we could have done with the day, I think we chose nearly the best, no, I think we aced this one.  The weather in this neck of the woods is ridiculously hot in the Summer, supposedly wet in the Winter, but Spring and Fall can be absolutely delightful -  warm enough for T-shirts and cool enough to be enjoyable.
﻿
It was a bit of a slow start, but once we got our feet under us we were heading for Grass Valley to go Geocaching.  We had originally planned to go to a ghost town waaaay up in the mountains until I remembered I was the duty chaplain for the week.  This was going to demand a much shorter trip.  Therefore, Grass Valley and geocaching was the outing of choice.
When following the lead on the GPS, you are never quite sure where you are going to end up.  There is a short descriptor on the individual Geocache, but you are only a little sure of the destination.  Many of you are picturing a road GPS.  This is not one of those.  It is the handheld hiking type of GPS that works only on coordinates never on addresses.  It would be totally useless to help you get to Walmart unless you had the Lat/Long coordinates of the store.  So, the arrow points in a certain direction and the distance reference says this far to go - that's it.  You have to track it down from there. 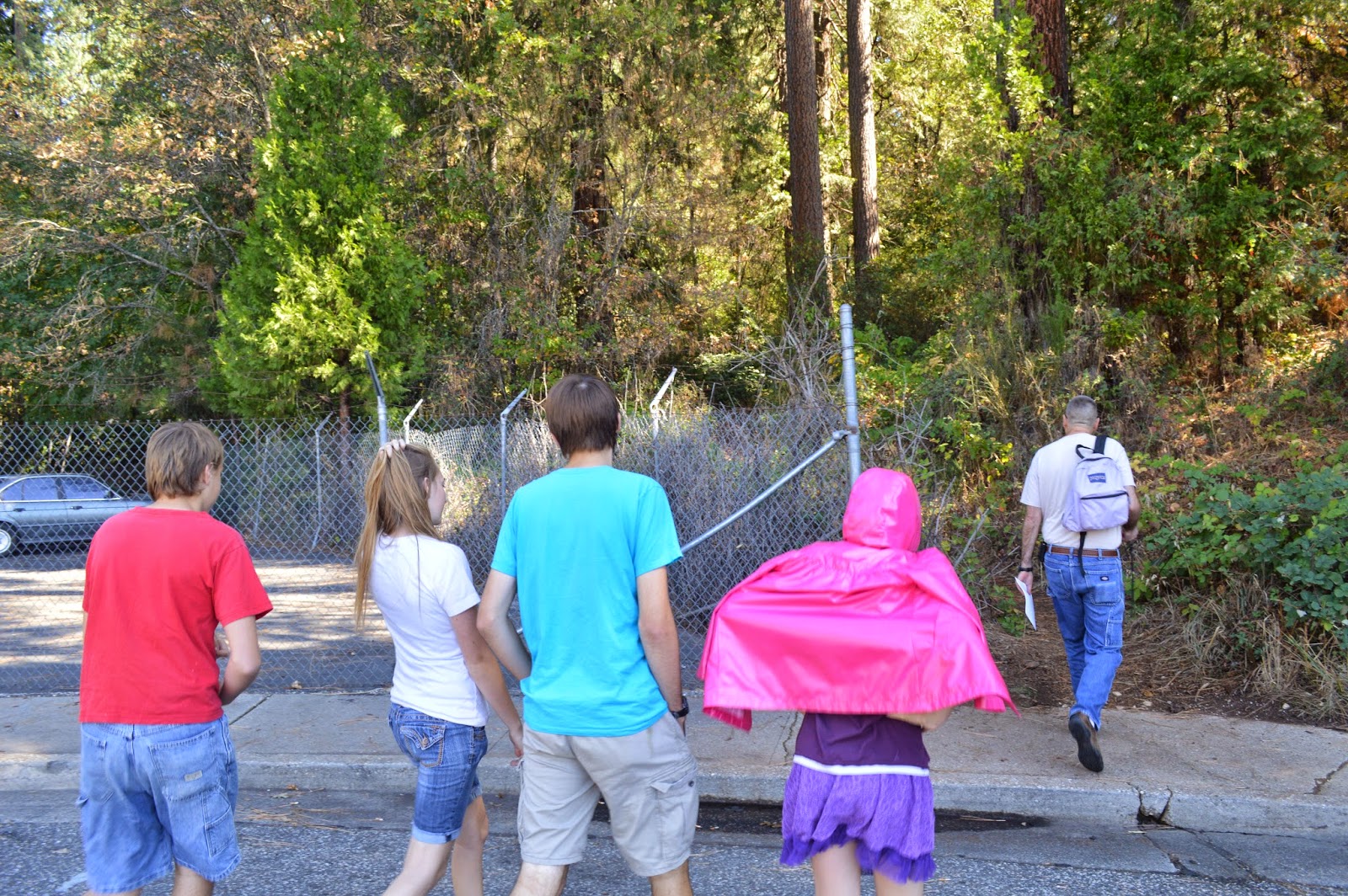 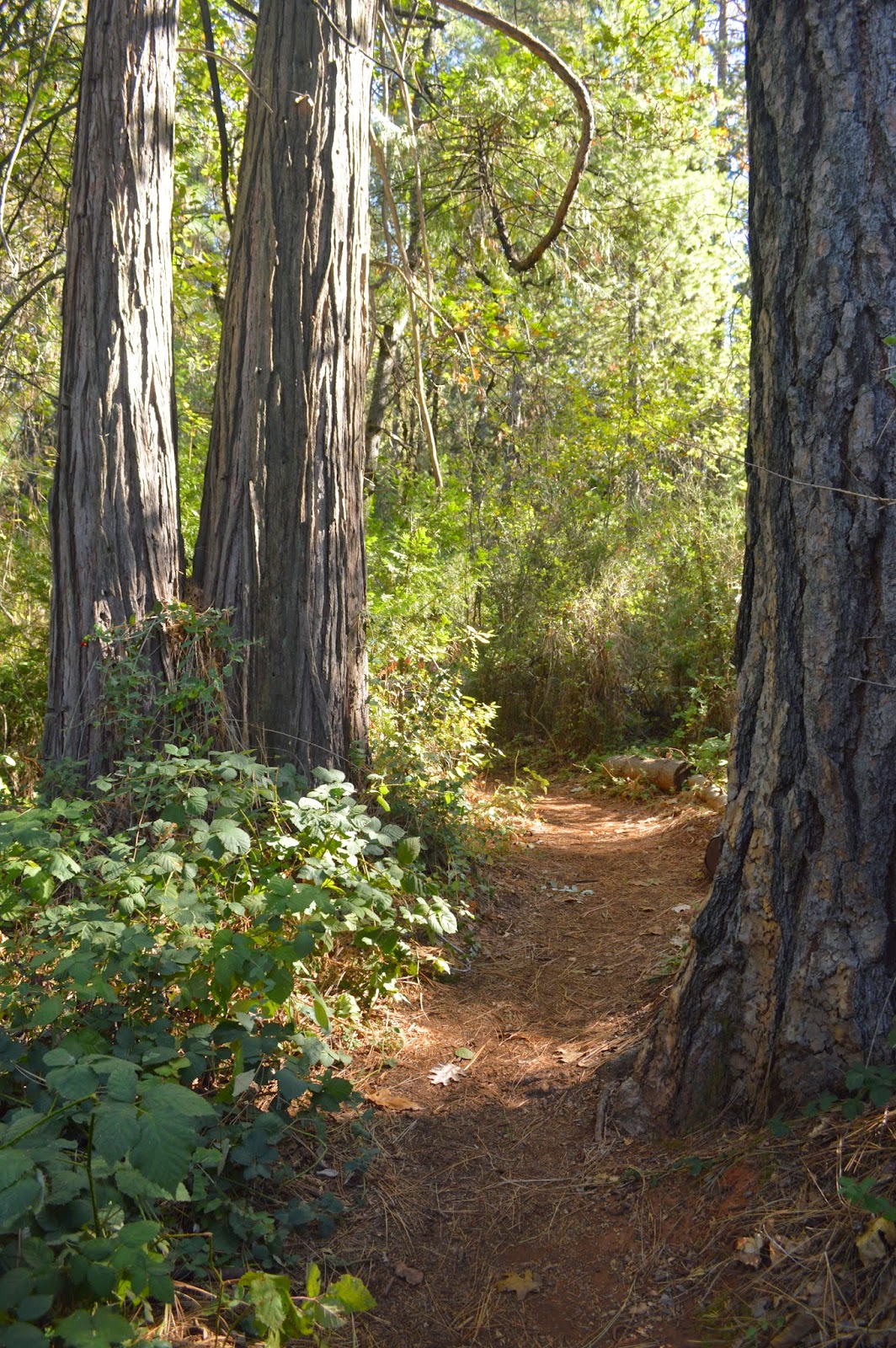 We were getting fairly close and the GPS led us to a cul de sac.  A chain link fence, a parking lot, and some trees was all we could see, well, except for that two foot gap next to the fence.  Yup, it was a trail.  Took us up to a side entrance to a nearby state park.  The GPS was going crazy because of all of the trees, but after giving it time to settle down, we were able to find the first geocache of the day.  The custom in our family is that the first person to find it says nothing, but wanders away and after a bit of time announces to all, "I found it!"  Then everyone else gets to intensify their efforts until they, too, find it following the same ROE (rules of engagement) as the first person. 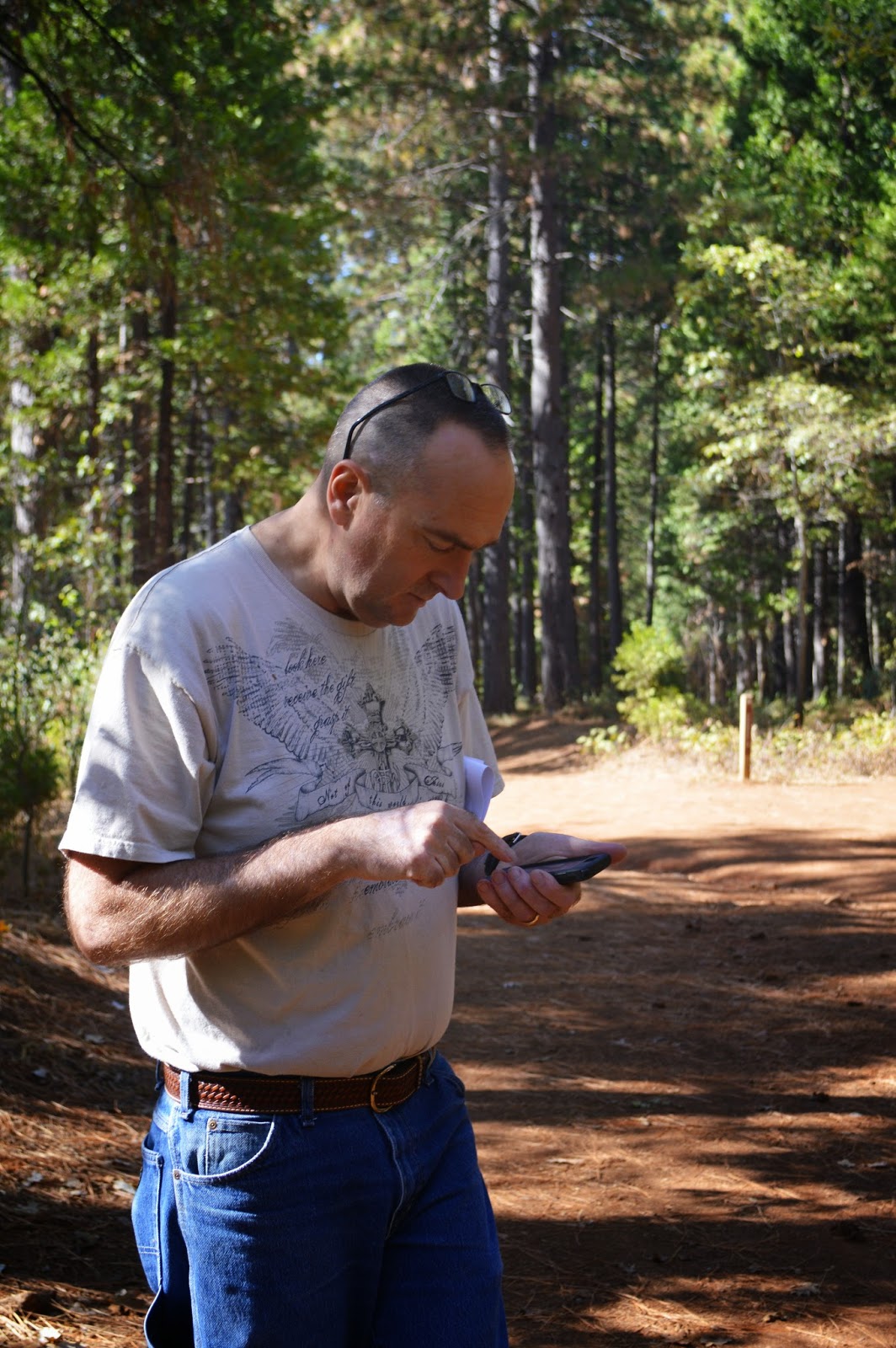 We found a travel bug in this cache.  It is a small item that is registered on the geocaching website that is to travel from one cache to another to eventually end up where the people that originally placed it can find it.  This one was heading to the East coast.  The website tells the people that placed it where it is or who last picked it up.  So, I stopped to try to get it registered along the trail so we could drop it into the next cache.  Otherwise, we might end up holding a couple of weeks before we could get it placed in another cache.  Well, this looks an awful lot texting, surfing, checking email or game scores or any other sort of thing considered misconduct on a trip like this.  So, registering it would have to wait, particularly since the nearby trail looked very inviting.  It called out to all of us...  "Come my way."  "I won't try to get you lost."  "I promise to not leave you in the middle of a boggy swamp with strange sounds and prehistoric creatures - this time."  This is a lot for a trail to say, but we all heard it and knowing that trails are not necessarily trustworthy, we had to think about it. 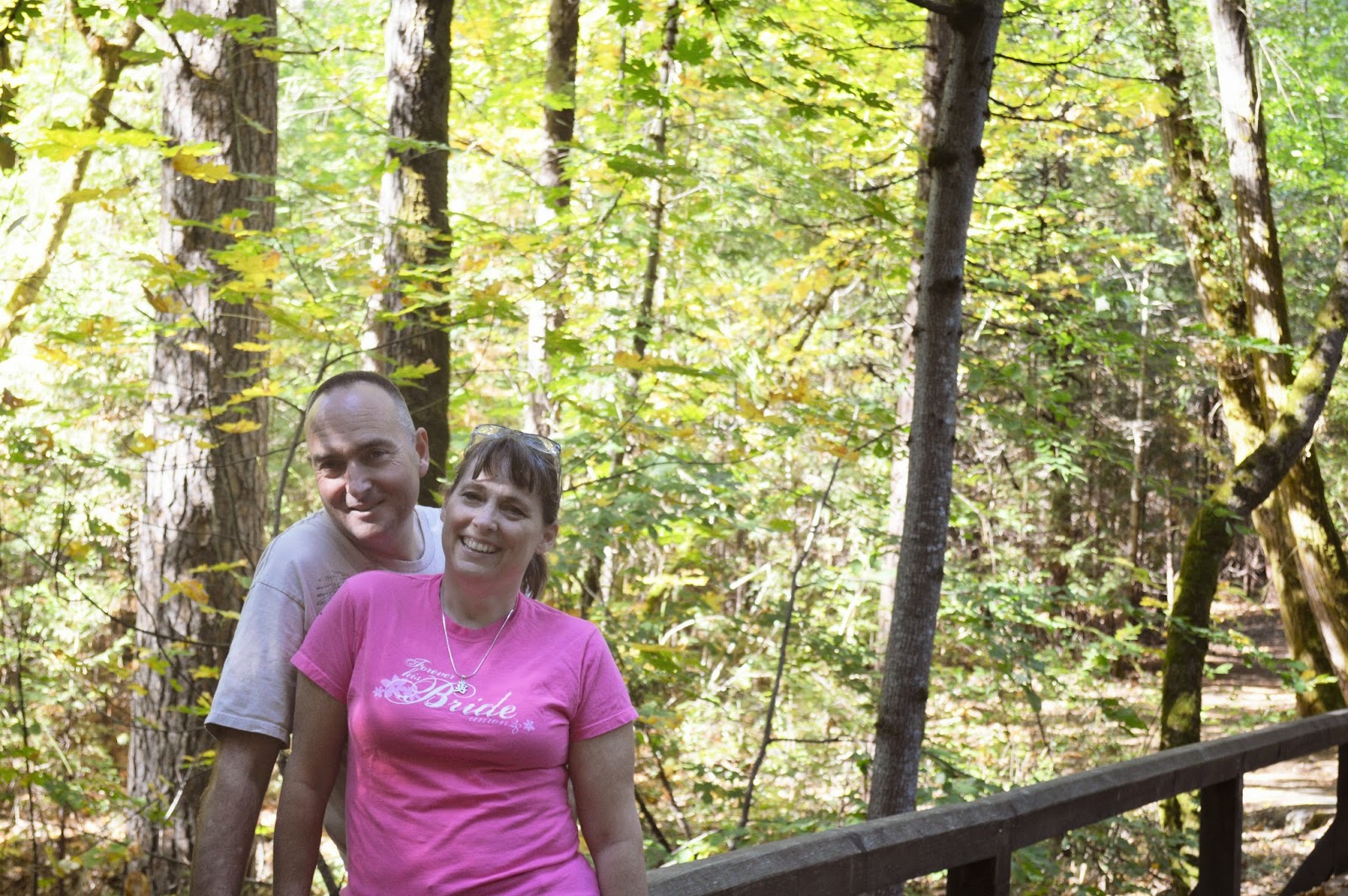 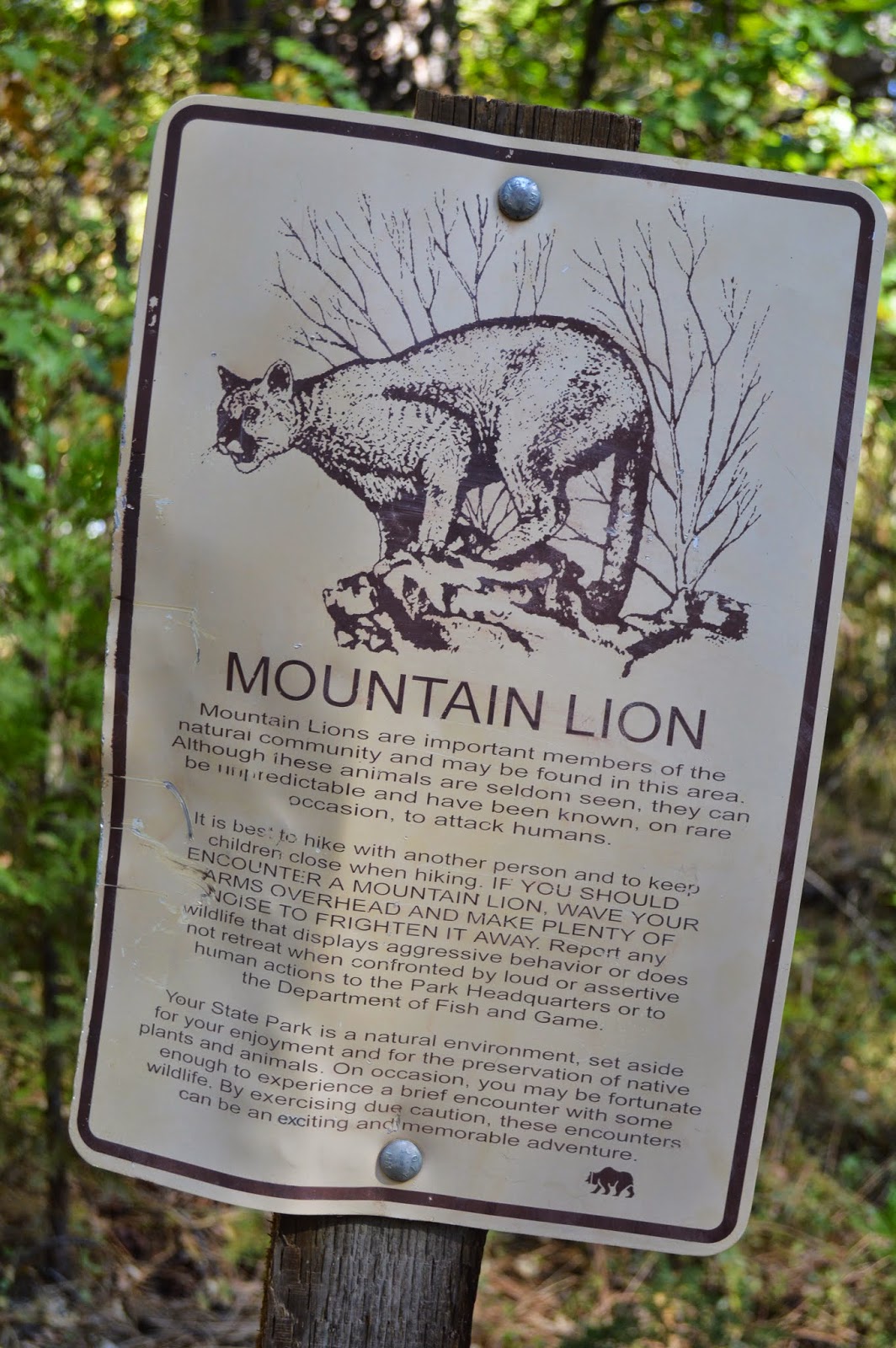 We all realized we don't really have to fear sneaking up on wildlife with Stacia along. She chatters and sings through the entire hike. Who knows how many near-death experiences she's saved us. ﻿
﻿

Well, we went anyway.  The trail was good to its word.  We wandered along the trail 'til we found some old debris. 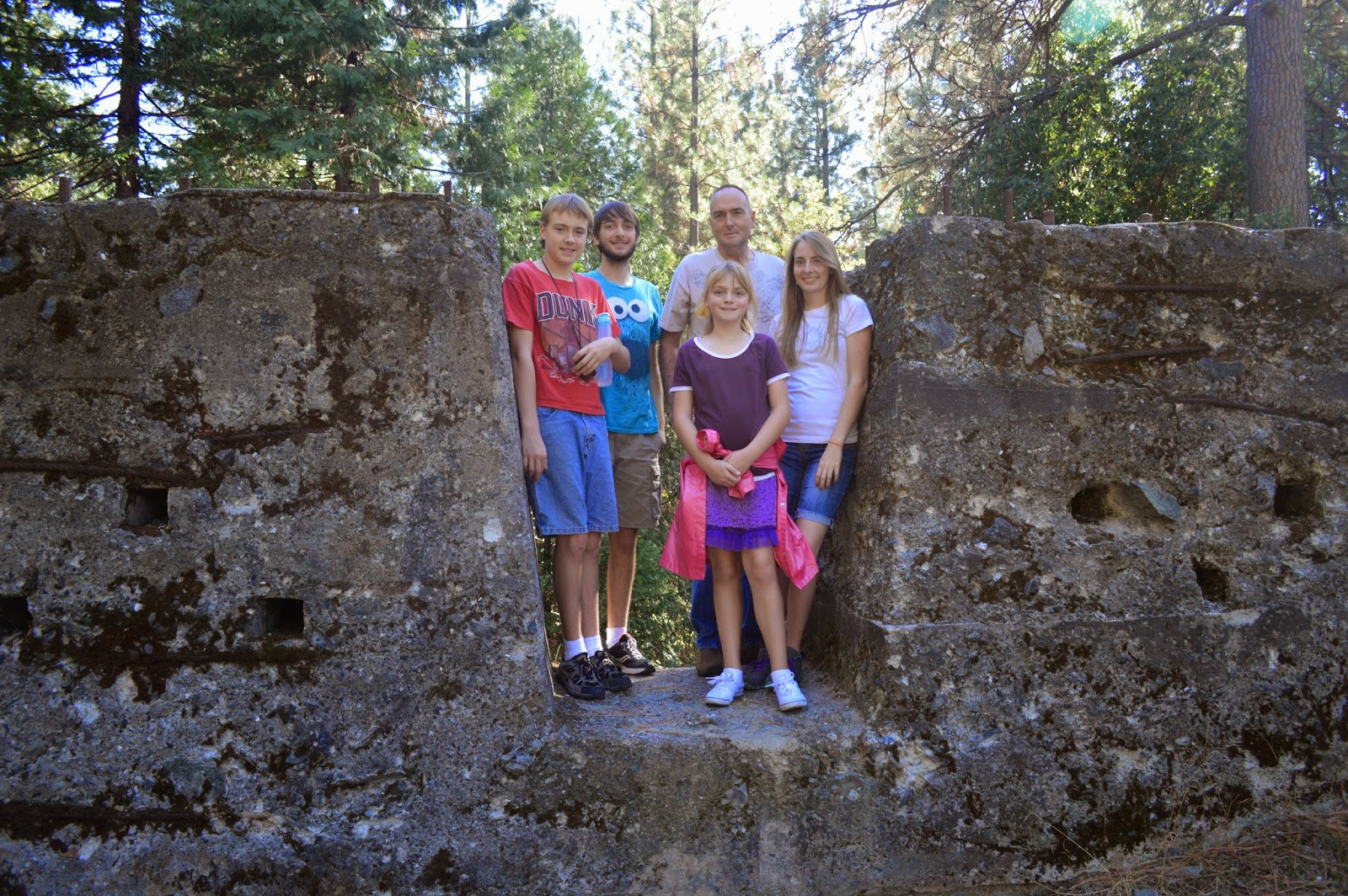 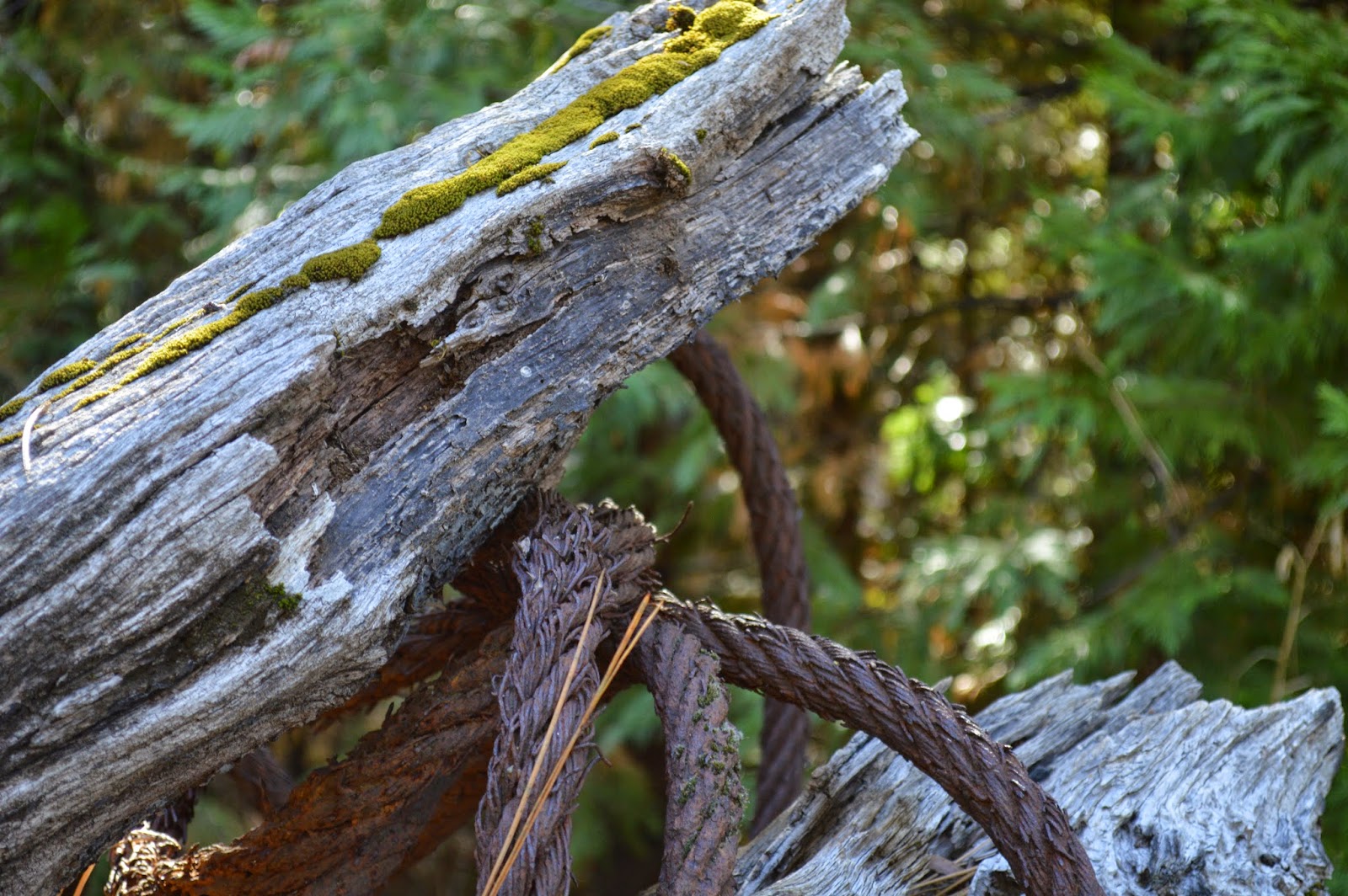 We enjoyed speculating on the various things we were finding...an old road, an old cabin....ah, when we climbed up the back of the trail and reached the front we saw THIS....mystery solved. 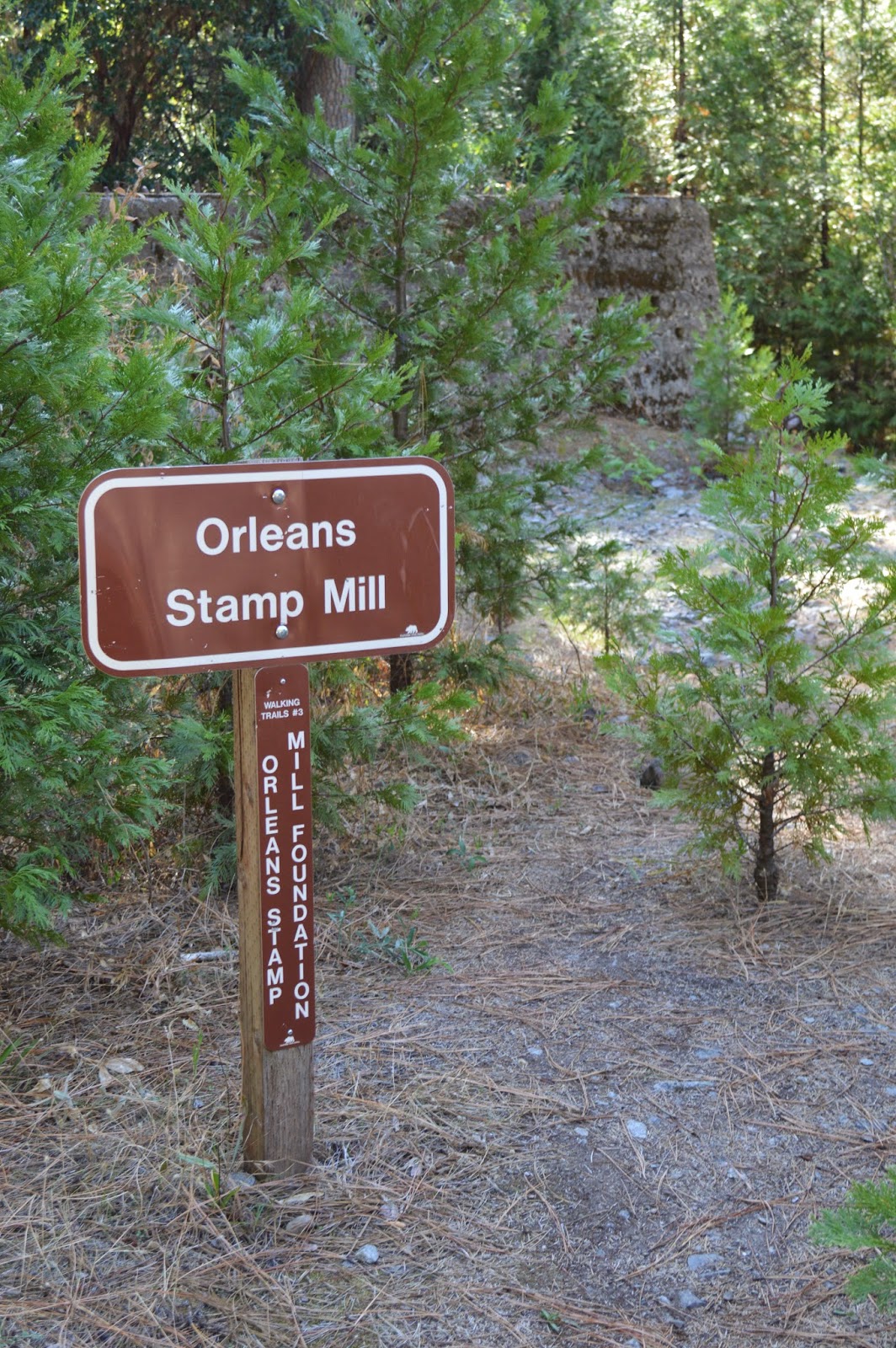 We stopped at one bit of old mining structure when Nolan and Arielle said they had found a geocache.  We were not looking for a geocache.  How could you find a geocache.  Well, you start to get an eye for it after a while.  Things can look strangely out of place in a very ordinary kind of way.  That is what caught their eye.  I went through the geocaches we had programmed into the GPS, and, sure enough, it was one of the ones on our itinerary for the day.  We were going to look for it beginning in another area entirely, but this will do... 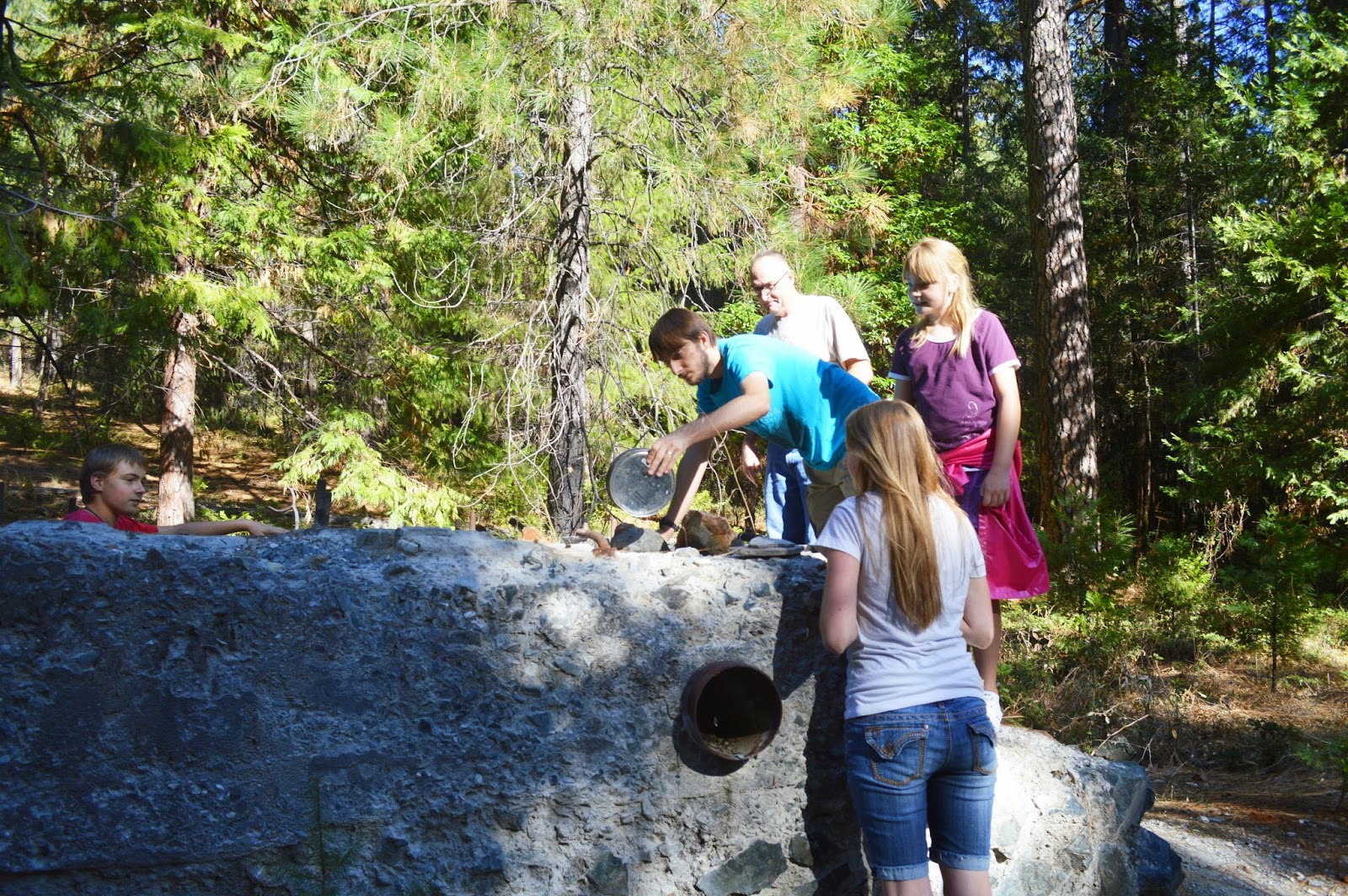 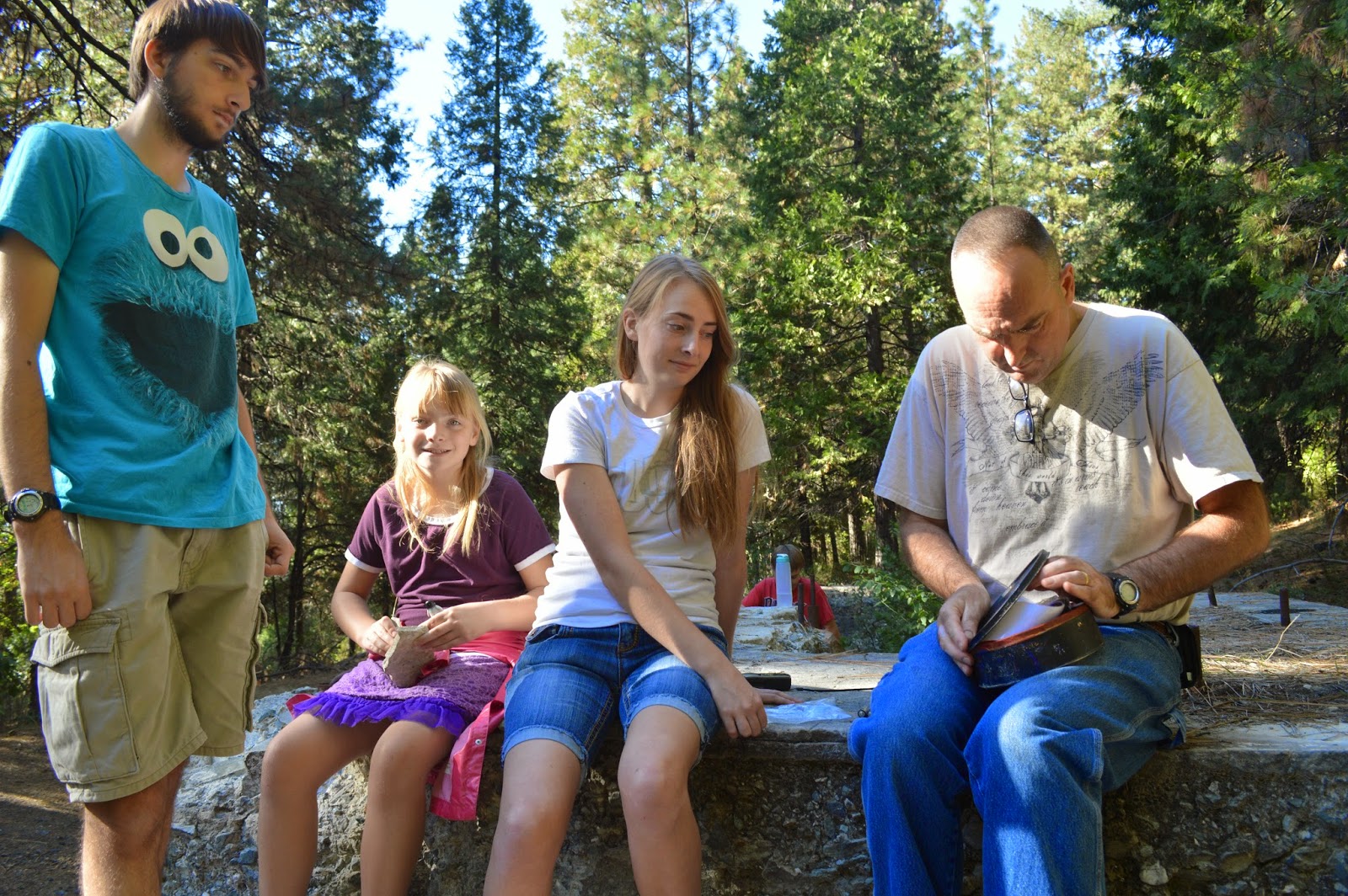 We wandered on up the trail not sure where it was leading us.  "Penn Gate" and "visitor center" was mentioned by some of our fellow-travelers.  Arielle was not at all sure our habit of taking off on unknown trails was a good one - we ignored her voice. 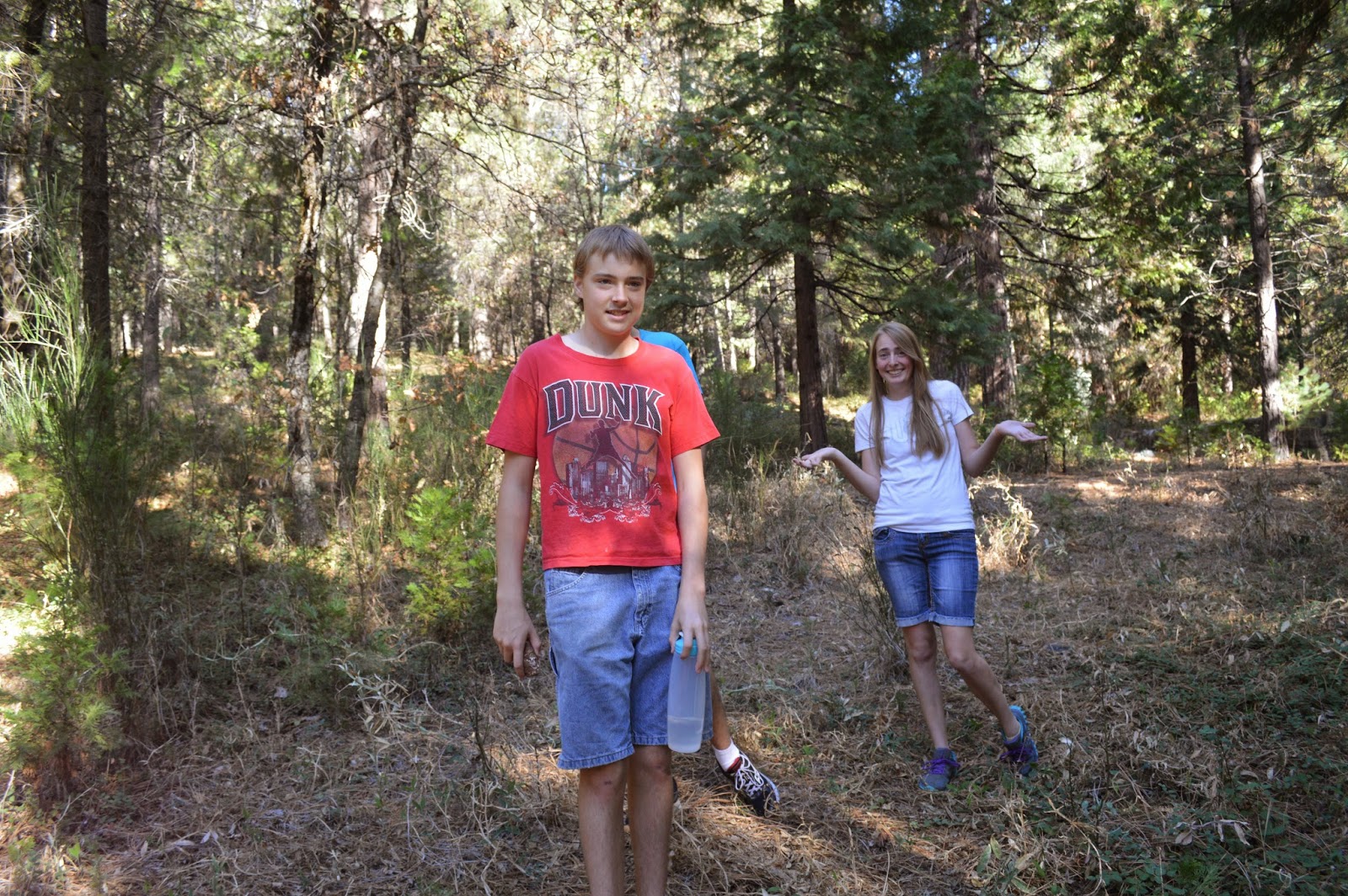 LOOK - may have been nice to see this sign before we hiked out of the area. This is disadvantage (or advantage) of hiking up the back of a trail - you miss the keep out signs completely. 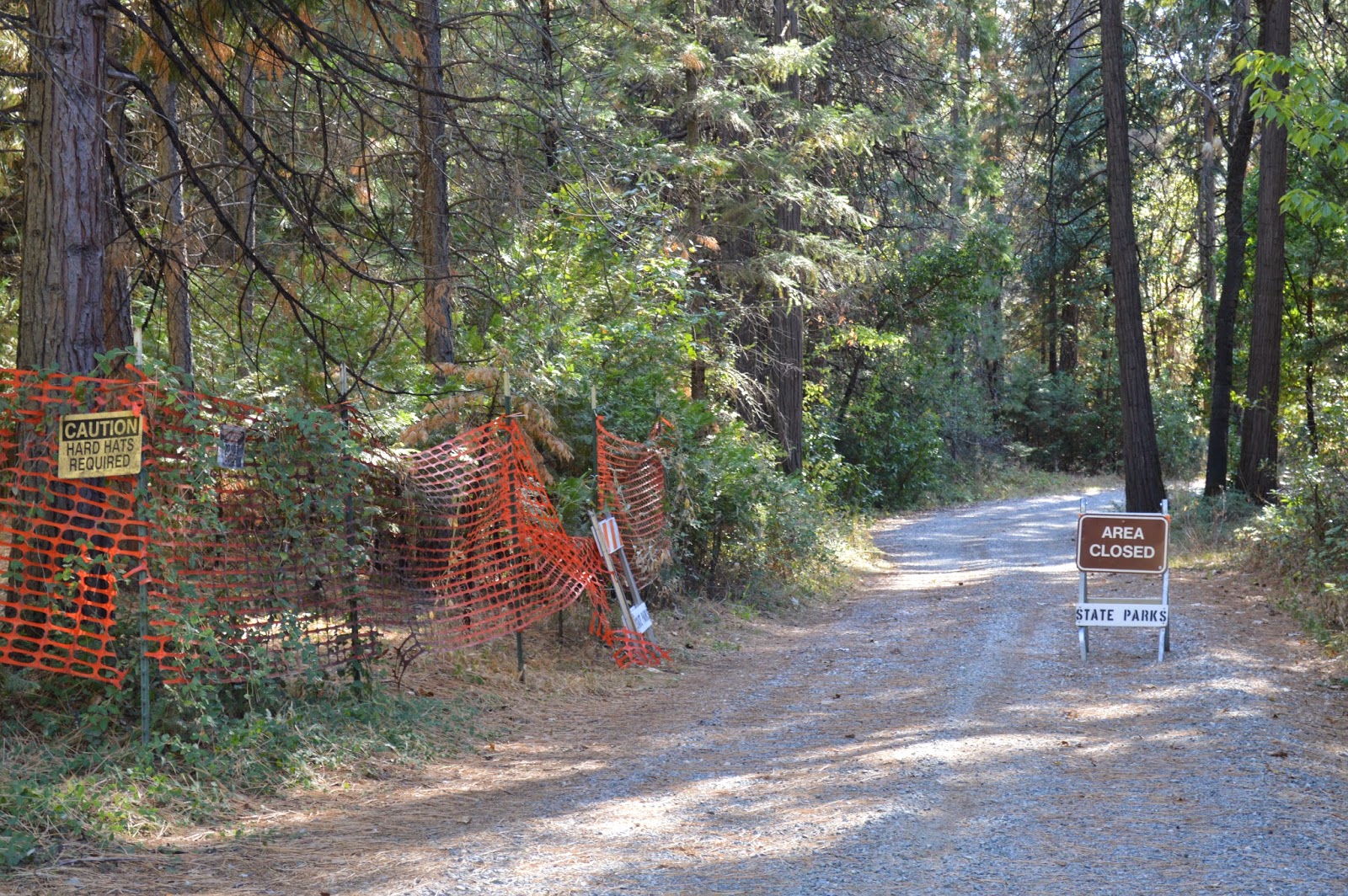 After a short bit more, we ended up at the Empire State Mine.  How the mine got all the way out in that area is beyond me, but there it was along with its "blessed" restrooms. 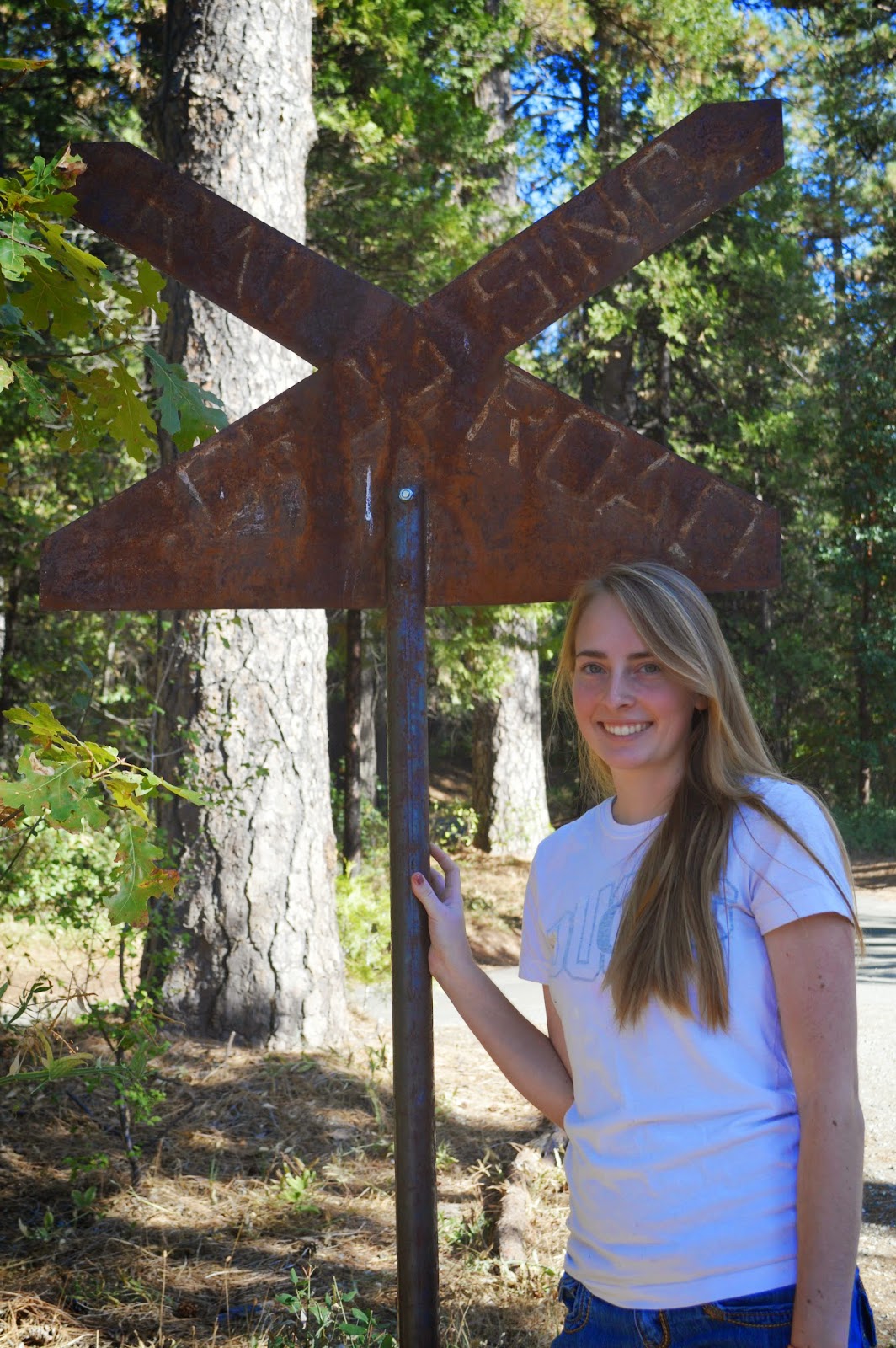 We plugged in the next set of coordinates and were off and running again.  I will share the entry De'Etta left on geocaching.com: "SHEW! We're proud of finding THIS cache. BEFORE we found it - we disturbed a bee's nest in a hole in the ground...they swarmed. We would have avoided this if we'd read the clue and been on the right side of the path. (We're too good to read the code clues!!!!)  Two of us were covered in stinging bees.....12 yo (Zander) was screaming, rolling on the ground and swatting....somehow bees got inside Mom's pants...and in desperation Mom dropped her pants on the path and began swatting. Youngest of the bunch (Stacia) sang, "I'm bringing home a baby bumble bee," while youth in the group (Nolan and Arielle) sang, "Shake it off." Mom and 12 yo son nursed their wounds, while Dad and 15 yo son went back to find the pesky cache. Sweet Success. Hilarious family memories. Thanks for the cache. Left a toy and a signature coin!"
De's notes - Here is Zander just moments before realizing the hole he was exploring was a bee's nest.  I snapped his photo. Nolan then got down and began exploring under a tree. Zander started screaming. 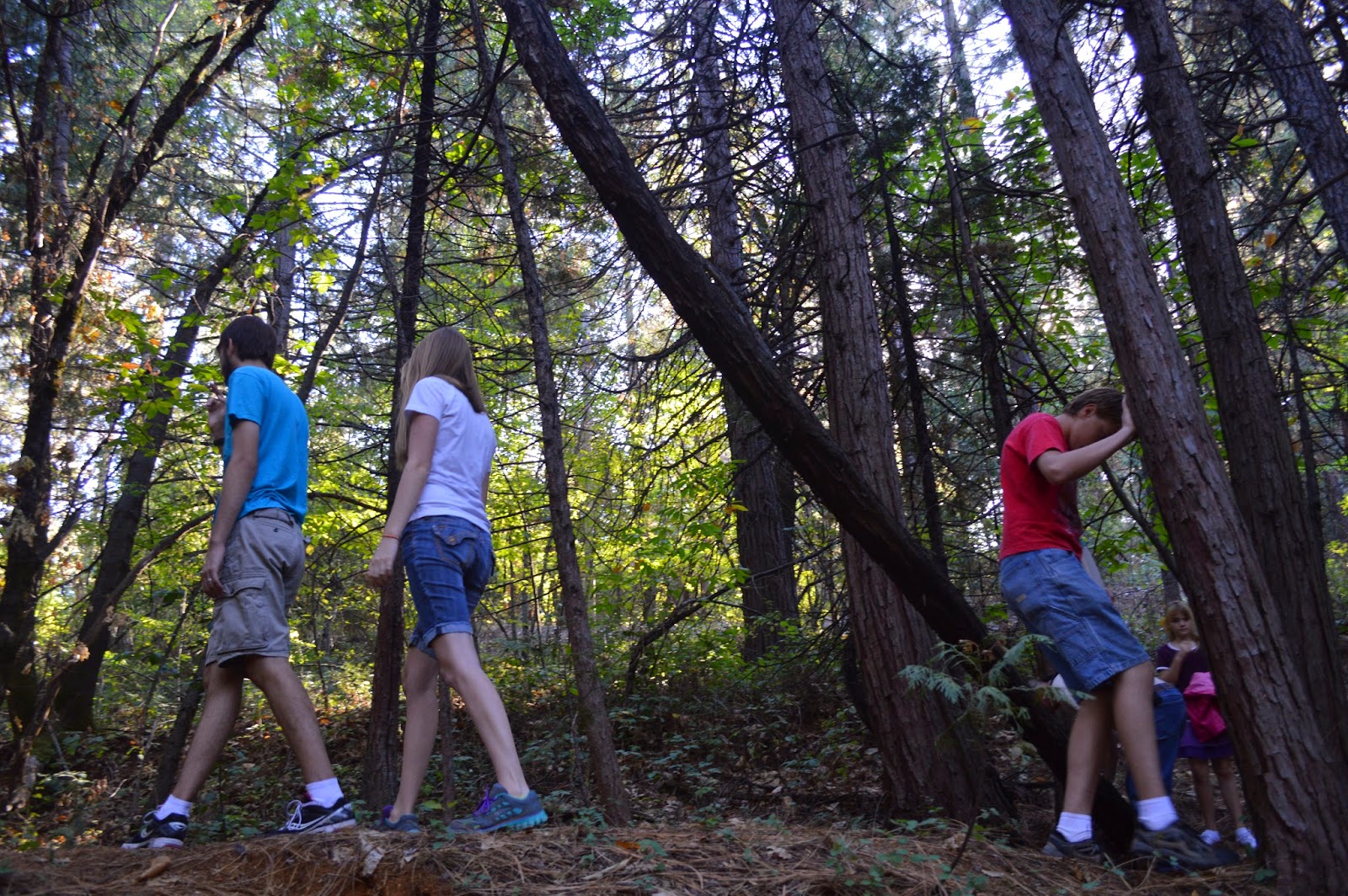 I came up from behind the camera and asked, "Did you find it?" He ran of screaming. I picked up a stick and explored the hole myself - as there is now way I'd reach into a hole for fear of a snake. BEFORE I felt any stinging Michael came running up behind me yelling, "Get on the path, get on the path." I hadn't a clue but ran for the path - could have been a python.  As we all tore past Nolan, crouched under a tree, he yelled, "Did you find it?"  (Don't you love our single-minded focus?) Michael began swatting at me and saying they are swarming....and then I felt the first sting. Zander was still rolling on the ground in agony.  Michael said to run up the path and we continued swatting at bees which were stinging me. By this time I was feeling them on my stomach and inside thigh....nothing was stopping them....YOU'D be desperate too! I DID rip off my pants....and I'd do it again. ::snort::   (end of my notes)
Michael finds the cache on the DOWN side of the trail 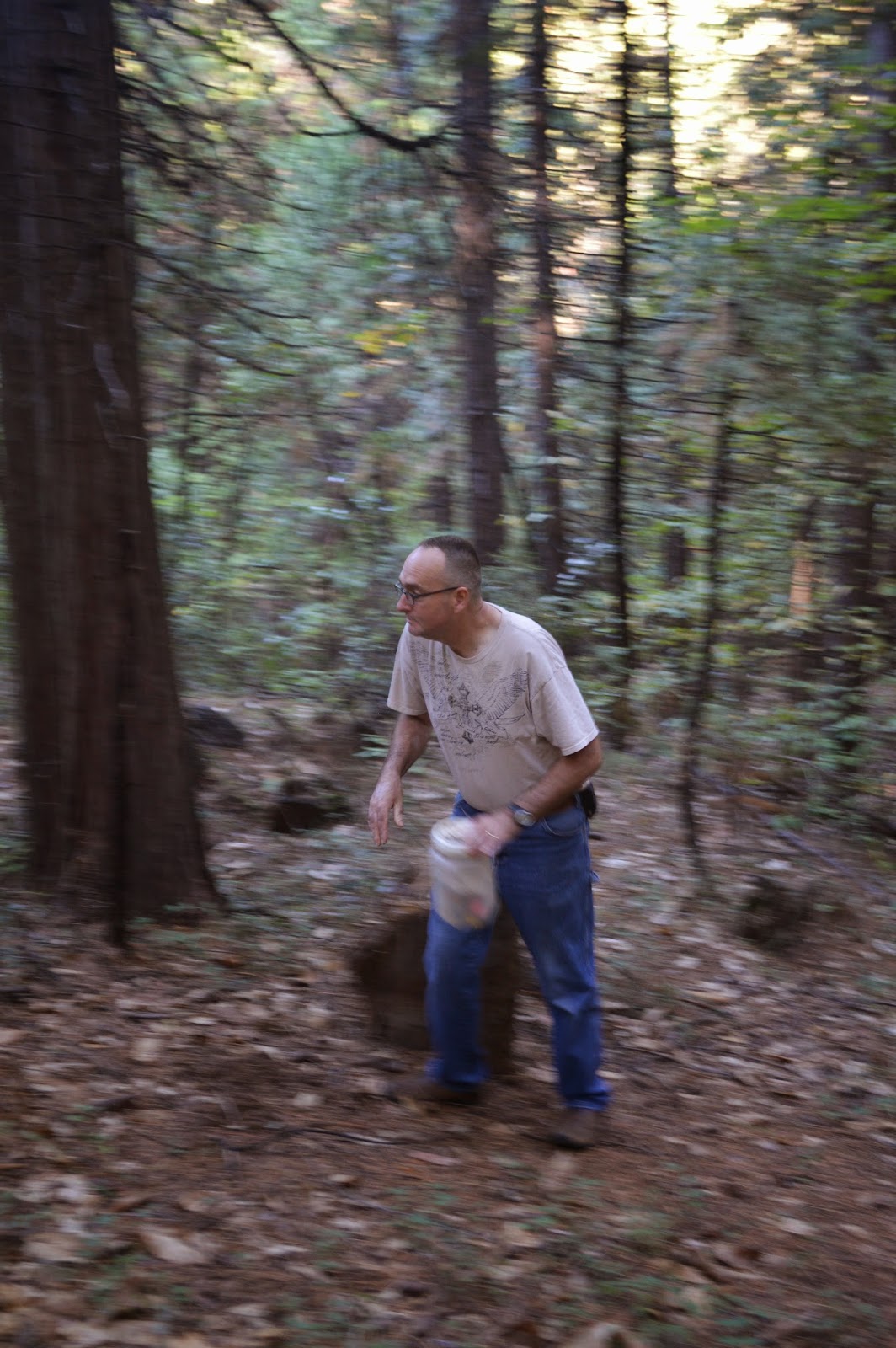 We had one more cache to go for the day.  Trundled back to the van, and headed out to find this cache letting the GPS vector us to it.  We found the actual "Penn Gate."  There was plenty of parking, and off we went.  We ended up crossing the road to get us into the general area.  This was a very difficult cache to find.  I do not want to give any spoilers out so no comments as to the name of the cache, but someone had taken the time to drill a hole out of a rock and implant it in the hole - pure genius.  Only after a family "FOD" walk could we mostly eliminate the entire area, and then that  "strangely out of place in an ordinary way" thing happened.  There it was.  Outstanding cache.  Well done!  Bravo!

﻿
Another family FOD was required to find Stacia's lost cell phone. This happened to be the second time she lost it during the day. 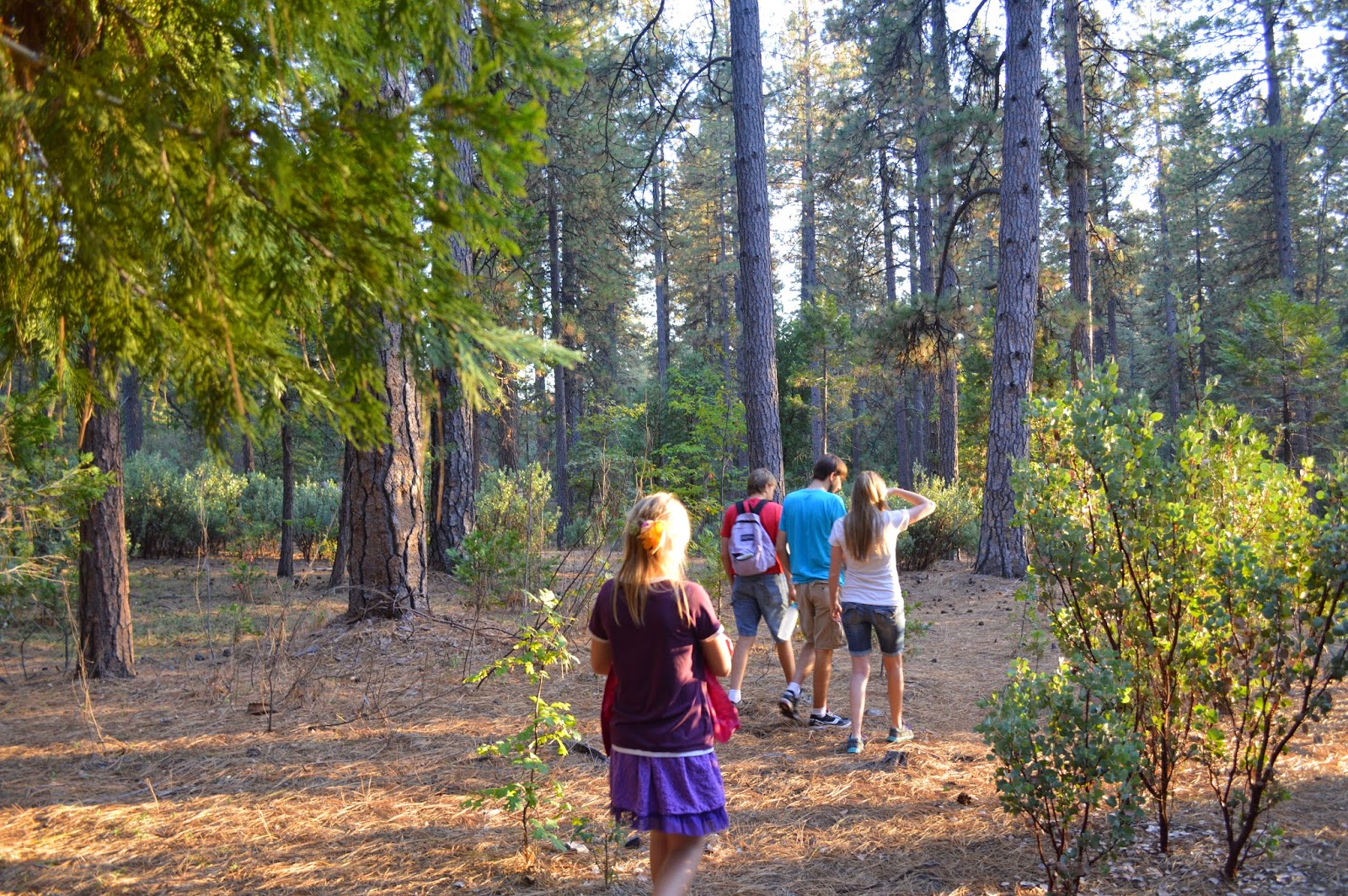 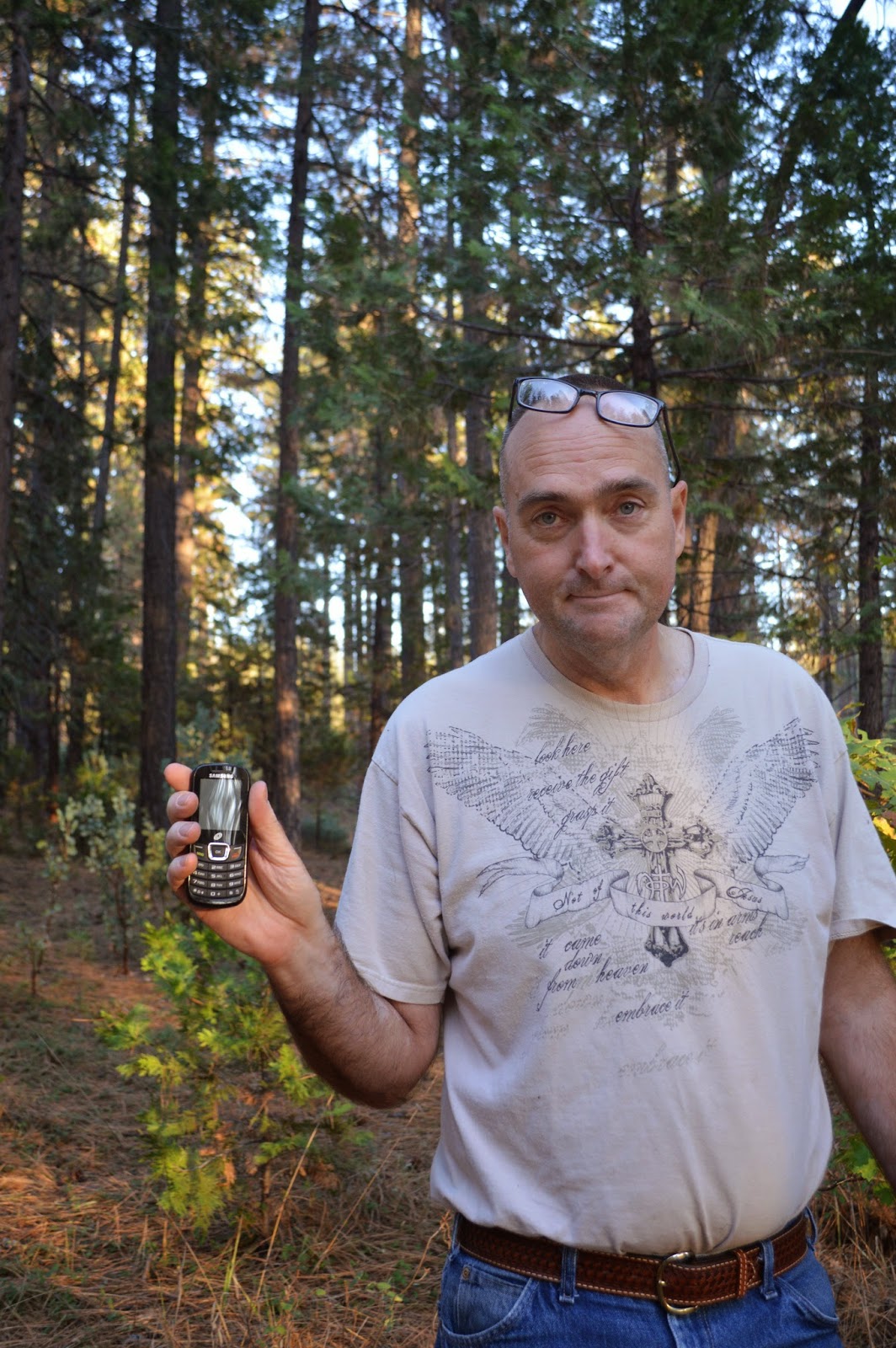 We ended the day with a trip to a re-constituted A&W restaurant.  It was very good.  The basil and pesto fries were a bit oily (and oh, so very tasty); the root beer was excellent, and the burgers were outstanding.  I can not vouch for the veggie burger, but rumors are it was outstanding, as well.

Joyfully Penned by DeEtta @ Courageous Joy at 9:01 AM

sorry to both you and Alexander. Sounds like quite the day and full of adventure. NEAT ! love/prayers - mom t.

Your story reminds me of an aunt who had been berry picking and got a scorpion in her pants. She dropped hers, too! I love geocaching, but my husband not so much. I need to get with my geeky son and family to go again. I'm glad you and Zander are not highly allergic to bees.

Wilma, I can only imagine a scorpion would be even worse than bees.