The View from the Top (Spencer's Butte)

Shew - they made it! They were at the top of Spencer's Butte when the sun rose this morning. 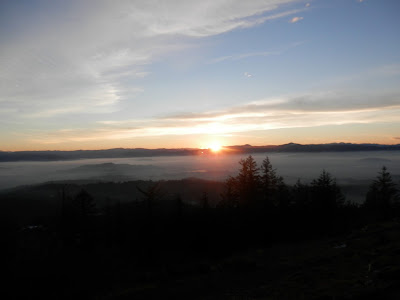 Spencer's Butte is a prominent landmark in Lane County. It is the tallest visible point when looking south from downtown Eugene.  The Spencer Butte hikes are part of the Ridgeline Trail System. The base of the butte is 1,300 feet above sea level. The elevation at the to is 2,055 feet.

Michael and I have been ill. We continued to make our appointments the first 1/2 of the week.  We went to bed on Wed and didn't really get up until this morning. The flu - with colds or a cold/flu. We were blessed to be HERE....Krista took the kids one afternoon and night. CoRielle took them another evening and all day Saturday.

Krista called Sunday night and mentioned she'd been wanting to climb Spencer's Butte to see the sun rise from the top before she leaves the area in 11 days - ugh I'm going to miss her!  I knew she wasn't sharing random info. I also knew Michael and I were still too sick to even think of a hike. Her proposition was  to pick up those who wanted to hike up at 0545 and drive to the butte...

The boys opted to join Krista. Stacia declared there was "no way" SHE would get up at 0500 to hike! They were up at 0500 and she picked them up right on time! Off for their grand morning adventure. 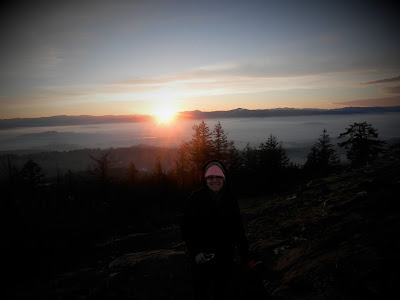 They somehow missed the entrance to Spencer's butte twice before it was found. The road follows an incline to a parking lot where one begins hiking to the top of the butte.  The kids were almost level -  almost to the spot to turn into the lot - WHEN THEY GOT STUCK.

Pushing the car - didn't work. Sticks under tires - didn't work. Chipping at the ice - didn't work.  While stuck at the top of the hill, another car got stuck and nearly slid off the road. The kids helped to turn their car around and they called it a day. Finally, a fellow-hiker with a truck  pulled them out of their slick ruts. They were ready to begin their hike! 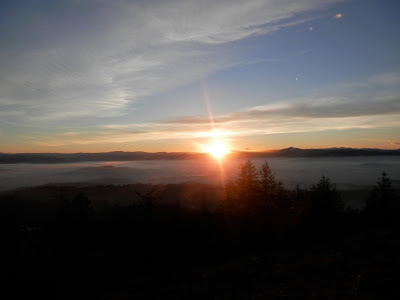 Nolan estimates the actual hike to the top took about 30 minutes. There were still spots where the trail was extremely icy and slick. In one spot each hiker they saw fell. It was worth the hike. I'm glad they made it to the butte before sunrise. 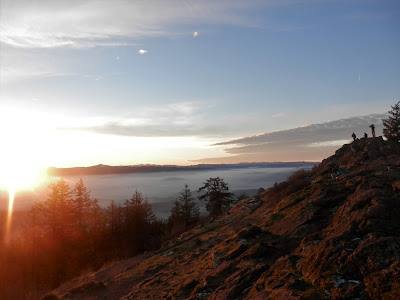 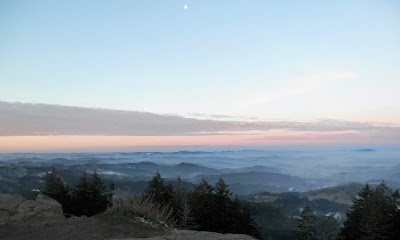 Yes, we certainly did count these hours as P.E.

Joyfully Penned by DeEtta @ Courageous Joy at 6:38 AM