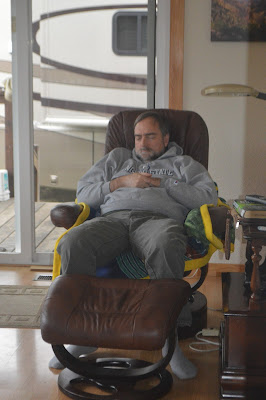 Michael had to quit using the Neupro patch. It was working great, but the adhesive caused an allergic reaction after 1 1/2 of using them.  He had angry, red welts up and down his sides, arms etc.

He is taking a new med. The past few weeks Michael has been using a bit of the new med and less of the patch. Over a period of three weeks he used less patch as the med dosage increased. This week he is at full dosage of the new med and no patch.

Poor man is having a terrible time WAKING UP. Our previous  complaint was he could only sleep 3-4 hours a day. Now he drags himself in for breakfast, and looks like he is struggling to stay awake as he eats, and then he falls asleep.....if we don't have places to go; he sleeps.

Severe sleep issues are a side-effect of this med. We're hoping  it will take a week or two at the new dosage for his body to adjust. If not, we'll have to call the neurologist and keep tweaking.

PS note the motor home out the patio window. LOL