Behind the Scenes at the Nutcracker Dress Rehersal (day 1)

I have quite a few cute behind the scene shots - but they are mostly of Doug and Deja's kids....so here are a few that include Nolan...I'll send the other shots to Deja and she can post them on her blog. ::snort::

Mom, I swear he isn't a card shark! Nolan tries to teach the boys Egyptian Rat. 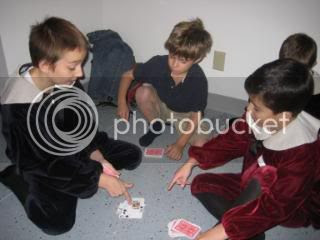 Ultimate Party Boys - Erik and Nolan Chillin on the stage 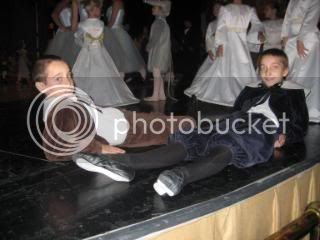 Hmmmm....it seems we'll follow our friends anywhere...first an above ground pool and now the Nutcracker. ::snort::

De'Etta, when did Arielle become such a young lady? Wow!

Nolan looks great in his costume. What a fun thing for him to do.

Nolan G'Pa & I sure do think you look great. We are really looking forward to seeing the foto's your mom takes of the play. Sure would love to see it.

Bet it has been fun.

Thanks for the kind words - ladies. I read them to Nolan and Arielle.

As for the young lady....I have a photo frame that flashes photos from 2007....and one popped up of this time last year and I was surprsied at the change in a year...but really, I think a lot of the change has been about a month ago when she decided to wear her hair down and let Bre take her shopping for some new clothes. LOL

I can't wait to hear how the performance went! WHAT FUN!