I've tried making yogurt in a cooler, on top of a fridge...17 years ago I began trying to make it. I was not motivated to try this recipe when my friend, Deja, began to brag about it. I am jinxed....but I DID buy all that milk on sale. I DIDN'T order a case of Brown Cow Vanilla Yogurt this month. I read all the comments several times at Crock Pot 365....and gave it a shot.

Optional Ingredients:
2 T dry milk powder per quart of milk (to thicken, added with starter)
1 T vanilla & 4 T honey (for vanilla - I did this but will use more next time, added at the end)
3 large pureed bananas per 1 qt yogurt (not sure when they added this but most say to add fruit right before using as it breaks down the protein if you add it earlier and your yogurt gets runny).

I lined up my ingredients, determined to try once again. 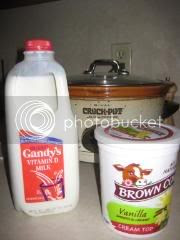 I did NOT use the vanilla as Deja told me it tasted a bit funky when she did. At this point I planned to make it plain.

Pour the milk into your crock pot. Turn it on low and let it cook on LOW for 2 1/2 hours. I was out running and it cooked 3 hours (Deja said that would be ok). 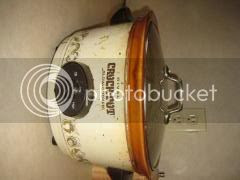 Unplug pot. Leave the lid ON and let it sit for 3 hours.

(Yep, still sitting. It was at this point I decided I would add a bit of dry milk and the vanilla and honey. We LIKE the vanilla best and I read over and over that this was "sharper" than store bought. I like the way this turned out but it's close to plain....so I won't have trouble at all using it for recipes and ranch dressing...and I'll add double when I want vanilla. Come to think of it maybe those measurements above were for 1 qt?).

Scoop out 2 cups of warmish milk and whisk in 1/2 C live culture yogurt (add milk or vanilla at this point too). Dump back into Crock Pot. Stir to combine well. 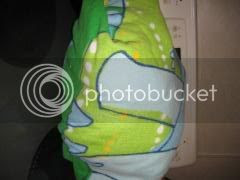 This was the toughest part. I accidentally chose Zander's dinosaur towel to wrap the pot in. He was NOT sure this was a proper use of his bath towel. 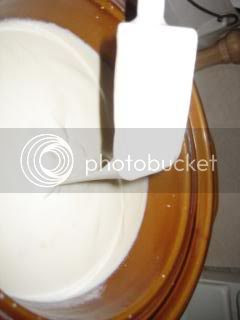 Mom, you KNOW I don't like yogurt. The kids really love Brown Cow and I tried it one day. It's thinner and wonderful tasting. This is similar. I had a bit over fruit this a.m. YUM!

Cost-wise this is far cheaper. Health-wise, I'm not sure. Since it doesn't keep as long it must have less preservatives (but I don't see preservatives listed on the Brown Cow label - pectin?). The Brown Cow we buy is non-homogenized and I like that....this will be made with homogenized milk....so it may be a toss up.....but I KNOW what is in this...no question about "vanilla flavor" etc. I can buy one 32 oz BC yogurt instead of two cases and make yogurt for the month. LOL

I'm so proud of you! I'm glad you tried it and found success. Enjoy your new skill ;-)

Wellllll.....we'll see if Zander and Stacia will eat it. They're my yogurt eaters. It's great in the smoothie. LOL

We use the Nola method. We mix the starter and milk and put it on top of the water heater(a warm spot) for about 24 hours. Of course since we use raw milk that may help too.

Hi.
When you have time please check your yahoo e-mails. I sent you an e-mail there.
Thanks.
Amy

Sis: Congrats on getting the yogurt recipe to work.

Like your page as it is easy on the eyes.

The WATER HEATED - how could I forget THAT one. I think maybe the problem was that I lived in MONTANA at the time - Northern MT and wasn't getting it warm enough....but this worked well....and the crock pot eliminates any need of heating the milk etc. Simple and easy.

As for the raw milk I'm still looking for raw - pasteruized or raw certified but I can't find it in TX. LOL

Mom - thanks. I like this too. I like it well enough that I may use it on the Region's PWOC page. I need blue for that one....LOL

Sis: Promise the next time we visit you all I'll try it but....
I hate milk and etc.... However I am learning to like a lot of new things I never thought I'd be able to stomach...

I think once I get my eyes operated on then bright won't bother. I have always loved brignt, light etc but not just now able to enjoy.........

Sis: Promise the next time we visit you all I'll try it but....
I hate milk and etc.... However I am learning to like a lot of new things I never thought I'd be able to stomach...

I think once I get my eyes operated on then bright won't bother. I have always loved brignt, light etc but not just now able to enjoy.........

Glad you had some success, DeEtta!

Oh how exciting! I'm so glad you got it to work!

I also have to say that you have my mother's crockpot. LOL I took her's with me when I moved out twenty something years ago. It finally broke a few years ago and I got a new one.

But your pictures brought back memories. I loved that pot! LOL

Good for you! That's great that it worked so well. When I was making it I found that if I added the vanilla after it finished it tasted much better than adding the vanilla with the starter, same with any sweetener that we used. I'm not sure if that will help or not. But, I used a yogurt maker so that might have something to do with it. (??) How great to have another skill in the bag!