A Tin of Tea

in your Backpack Wins You LOTS of Attention in American Airports! No one even ASKED on the way here. LOL  "Why, Yes, I DO have a metal cylinder in my backpack!" ::snort::  I checked it through.


I told the kids, "Let's write about yesterday for the blog," and Stacia replied, "It was a cold, long and boring day. And that's the end."  ::snort::


We arrived EARLY to check in and were told we had to pay $9 per person to board, $25 per checked bag (not even the first would be free) and $29 per seat. Wow....we are NOT in Japan any longer. Where's the sushi, free slippers and blankets?


We talked back and forth. I was gracious - if incredulous. She told me it's been this way for years. I told her I've not flown domestic in several years.  I told her we did NOT want to pay for seats which I thought should obviously be included in the price of the ticket. It turns out all they had left when we bought our ticket were some sort of "upgrade" seat...but that is not MY problem. I did not REQUEST these seats. I booked online and expected to take what they gave me. She finally understood my logic. I also explained there was no reason we needed special boarding, so she removed that charge too.


Friends are telling me that they waive the fee for baggage if you are active duty or a dependent....but they told me you had to have the active duty member with you and be on orders. I will try again when we leave. LOL


She warned me the meals on the plane would be for "purchase only".  $10 for a sandwich, $3 for a pack of crackers (you know those snack packs???) and $6 for the snack bag of chips. We ran through a little store on the way to our gate..... No bentos or rice balls in sight...but we did o.k. I told the kids they are American Bentos.  On the plane several men asked for what the kids had (we were all in different spots).  They proudly said, "Mom bought these before we got on." ::snort:: 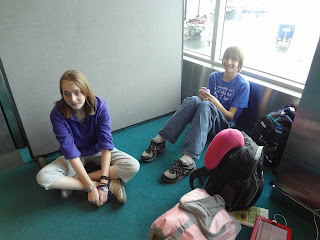 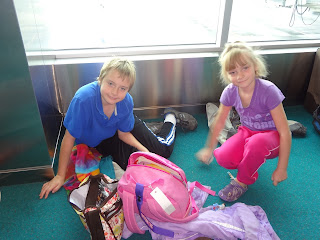 We did fine in TX - and we'll need the full hour on our return trip to make connections - but we can do it. We RAN through the halls but made it....even had time to snap a photo of this vending machine. Now we're talking.... 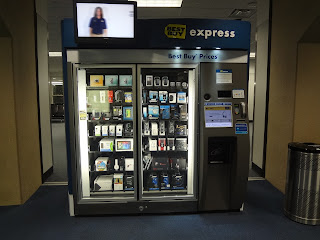 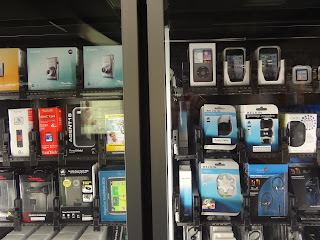 Jamin showed up at the airport early to pick us up. He decided to sit and study for a final. As we exited - we set off an alarm. Jamin looked up and said, "Yep, the families here." ::snort:: Meanwhile, the man was saying in a stern voice "turn around and step away" so we did...then he shouted "go through the exit"....so we did...then he said, "Turn around and step back from the exit"....so we did....then he said, "I'm talking to the man in the blue coat." ::snort::  I really couldn't figure out how WE set the thing off. LOL  Evidently the man went through, realized he forgot something and wanted to come back through, was told no and did it anyway - right as Zander approached the exit gate. ::grin::

Josiah and Shelby showed up and we came to the hotel, had pizza and slept well.

Joyfully Penned by DeEtta @ Courageous Joy at 2:23 AM

Way to cut to the chase, Stacia! Who is Shelby? Have I missed something along the way? :)

Shelby is a friend of Jamin and Josiah's.

boarding and seat fees are ridiculous. luggage fees are pretty common stateside. And yes only when on orders are the fees waived or at least reimbursable by the govt