Zander used to run with Jared. Arielle and Yuuki have been running with Zander since Jared went to college. The S girls began to run with them. They run five mornings a week. 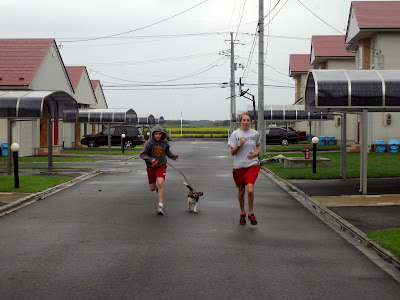 Joyfully Penned by DeEtta @ Courageous Joy at 2:12 AM

LOL!! Smart Yuuki, that is so cute! I'd have been a bit bummed though, because as a kid, I'd want to keep that snakeskin. (Her mom was probably grateful.) :D

Love how the kids are running, and that's a great shot.

I know - easy homeschool PE - how cool is THIS? LOL AND SOCIALIZING.....