Tonight was the 2nd Annual Edgren Variety Show. It was held in the small theater of the Misawa Cultural Center.  Misawa Chapel's PYOC Human Video Team performed to "Everything."

Nolan played Jesus in this play. That isn't his normal role but Emily (student leader) felt it would be more comfortable as there was dancing and such between Jesus and Arielle.

It started with Jesus making movements and invitations to Arielle. They seemed to flirt with each other...danced for a bit..... 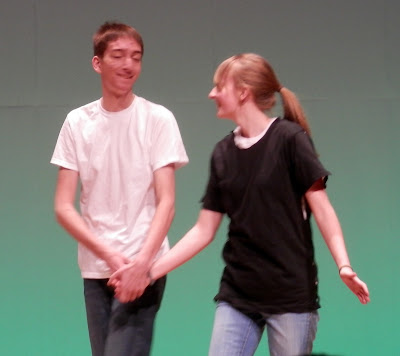 A variety of kids began to present Arielle with opportunities....a young man with a rose and they danced a bit, partying, drinking, cutting and this one is blurry but it works....A presented Arielle with looks, ripped her pony tail out, put a crown on her head and taught her to strut. 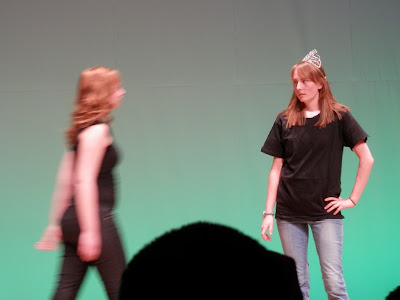 Eventually, Arielle is prompted to commit suicide and you see her struggle with that and a variety of formats....she drops the gun and tries to run back to Jesus....all the others begin to beat her up....eventually Jesus comes and covers her as she huddles on the stage.....He seems beaten down and the others continue to push and beat him....then he slowly begins to rise....and finally he's upright, she's upright and they're dancing again.  I was avoiding the head in front of me and cut out Arielle.... 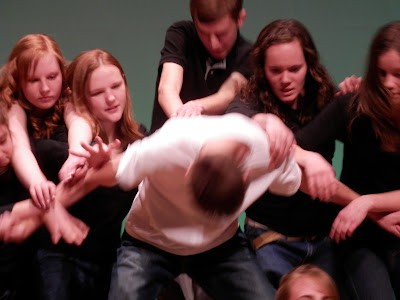 The Human Video Team was an outreach Jared began when he was here. When he moved on, Emily (right corner) did a great job taking it over and running with it. It's been student led and it's been fun to watch the growth of the team through the years we've been here.  I think we can classify watching this performance as "bitter sweet"....It's another of the lasts for this assignment...all but one of the family of youth who participate are pcsing...so focus will now shift to finishing this semester, packing out....this was a great way to finish this year of human video team.

They all did a superb job! I'm especially impressed when they take a clear message beyond church walls out into the community...it can't be easy to take such a stand at your high school. Great job young women and men of God. You inspire me.

I was happy to share the evening with Akikosan. She was impressed and said high-schools in Japan don't put on such things. It was a blast to share her reactions. Two friends from the neighborhood joined our family for the evening too.

On a side note Arielle has gotten very convincing in her roles....and I don't know that I'll ever watch her be lured from Christ, beaten up and trying to commit suicide without tears in my eyes.

This is their last Human Video performance in Misawa, so I am posting the photos even though they are fuzzy...the others were WAY too fuzzy.

Joyfully Penned by DeEtta @ Courageous Joy at 4:00 AM

I love that sketch. Makes me me cry every time I see it online.

Edgren is the name of our DOD highschool. ::grin::

HI: Wonderful! How exciting that our older kids in Japan was able to be part of this. Proud of you kids! I am sure people who watch you are touched. PTL and we'll just pray that those who have seen the productions will remember etc.