This was a full day! Nolan has it off and both of were happy to sleep in past 0430.

We bought a smoker. We'd been thinking about it...budgeting....Dave suggested instead of paying Valley Meat to smoke his fish (need 20lbs) he pay us and we put it toward a smoker. We did.

Michael and Alex spent yesterday afternoon filleting the 15 salmon which we and Dave/Davy caught on Saturday.  I put the fish into a brine last night and they were waiting this a.m. in the fridge. 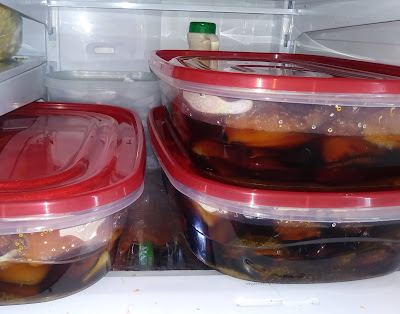 We dried them for a couple of hours 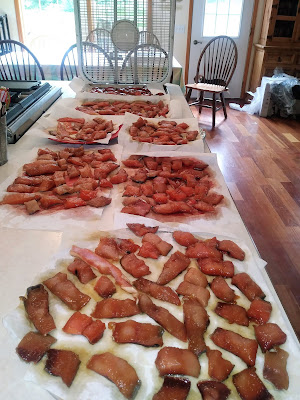 We smoked them for a couple of hours 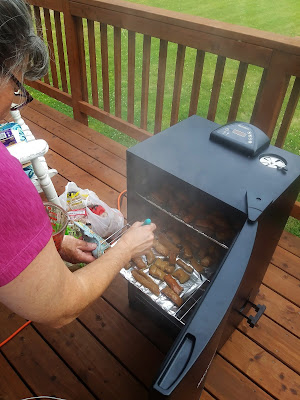 I'm sealing and freezing Dave's fish. I hope to can ours (our freezer is FULL), but I wonder if they'll be yucky since I smoked them until they were done and they'll cook longer in the canning process. 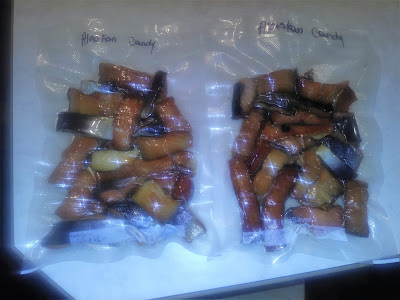 Cory put shingles on  the roof of the rabbit hutch. Stacia was happy to volunteer as a bunny sitter. Arielle cleaned the cages. Stacia noted the one sprawled on top reminds her of Arielle - sleeping anywhere and she should be named Arielle. ::snort:: 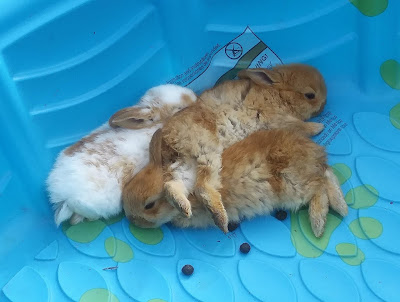 CoRielle told Stacia tonight she can have her pick of the 5 or 9 week old bunnies. She's thrilled. Arielle is happy she managed to save another bunny for a pet. 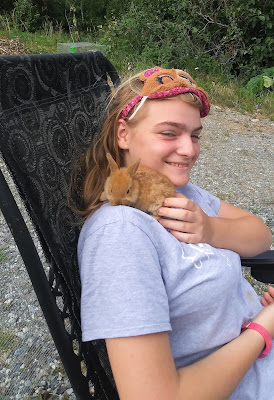 Olga Olaf has taken over for Helga Hitler....and woke us up crowing at 0415. It is my plan to try blocking the window with cardboard....I forgot tonight so it will be early again tomorrow. I will remember.  The folks who brought the bunnies over on Saturday commented that I had a couple of more roosters. I took videos and sent them to my chicken friends to see what they think. The consensus is I MAY have another 1 or 2 roosters - but not 5 more.  Jodi noted that I should open up the nest boxes as my Reds/Novogens had dark combs and wattles and that signifies they are about to start laying eggs. We boarded up the nest boxes as they were sleeping in them instead of roosting. They are "due" to lay eggs at 5 months, but Jodi says the Reds lay early. Woot! They are about 3 1/2 months now.

We made a trip to three bears which resulted in the need to vacuum seal some meats.


Stacia and I picked a salad. It's a start! 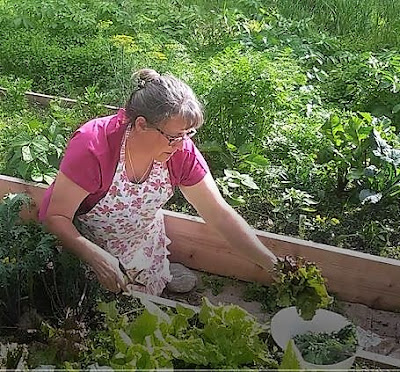 I cooked dinner - we kept smoking salmon and packaging it. I heard commotion in the hen house and went to check it out.  It was after 10 p.m. and time to put the chickens in anyway.  I spilled their water and had to remove wet shavings and put some dry ones in, refilled their food, cuddled the one hen in the coop,  and then decided to see how hard it would be to remove the board closing the nest boxes. 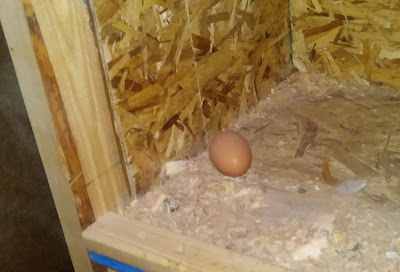 Our first egg! Way sooner than we expected. I'm not 100% sure who laid it. I know it was one of the Red Sex Links (I have 6), or possibly the Cochin, Black Star or Orpington. The others lay blue and green eggs. This means I have at least one hen and my nightmare last night of having 18 roos will not come true. We'll remove the board and put shavings in the nest boxes in the morning. I'll also check carefully to see if they've hid eggs under the boxes. They have been moving the shavings under there and piling them up.

Joyfully Penned by DeEtta @ Courageous Joy at 12:22 AM

Yay! I'm so glad you got your first egg. Got to be your red sex-links or Novia, the cochin and buff will be a little later I think. They're more slow to mature breeds. I'll keep thinking hen thoughts for you! Love the bunnies too, I kinda want one :-).