He got the Wrong Impression

Michael has become a Craig's List ultra user. We don't buy a THING without checking Craig's List and the local buy/sell list. We've purchased wood stoves, rims, cords of wood, chain saw, utility trailer and most recently a GMC Sierra Truck. Josiah has purchased set nets, snow machines, and a trailer... We've had really good experiences. We're conscientious. If we plan to bargain we ask them if they are open to negotiating right from the start. We told the truck owner we'd want him to take it to our mechanic before we met him. In other words, we don't surprise the sellers. We've been told by several it's a pleasure to do business with us.

However, our last sale was odd. The man seemed nervous. We thought maybe it was because he was from Ireland and wasn't used to Craig's List?  After a couple of trips to Anchorage to check things out, we were ready to close the deal. We told him we'd meet him on Tuesday morning with a cashier's check. He didn't want to do that. He insisted on meeting us at the bank and watching the transaction for the cashier's check. He didn't want us to give him a ride back home or to his work, he took a cab, instead. We got the feeling he thought we were shady and was nervous about us... We couldn't figure it out.

Then... we laughed! I think he got the wrong impression. I think he thought we were hippies or drug dealers.  I wonder if we should let him know we are both licensed pastors? 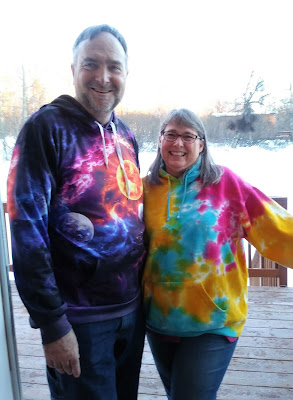 Michael bought me a car! A sporty mini-van. I drove a 15 passenger van for decades while dreaming of a sporty mini-van. I've dreamed of a mini-van since 1994 when we traded in the panel-sided station wagon and got our first 15 pass van.   We outgrew the mini-vans before we purchased one.

We opted to buy the Jeep Liberty instead of a van a year and a half ago as we needed something we could tow with the RV. I love the Liberty. HOWEVER, in a year we've had to put 4K in repairs into it. We think the head gasket will be going out within a year. We are  no longer living in the RV and traveling. We have 3 big adult-sized kids who haven't complained about cramming into the back of the Liberty (they rock),  but I dreamed of a car with room for us to take grandblessings or guests with us on adventures. The Jeep will be a nice starter car for Nolan. He won't mind repairing it as it was free. He's saving up for a car. We just didn't like paying a good price for it AND putting in repairs, only to know it will need more soon. LOL
We are a Dave Ramsey family. We have been for decades now. We decided when the house sold in CA, we'd take some of the proceeds and buy a "family car." Our mechanic told us to look for a Toyota Sienna AWD or Honda Odyssey AWD/4WD.  This after we'd brought numerous cars to him to check out - he didn't like any of them. We had a budget for the car. Michael decided he needed a truck. We hoped to find a nice van and a beater truck. He found the truck first, and it wasn't the big 6-seater, but it wasn't a beater either.  We were offered another van, but Michael had found this one. It's the mileage we wanted (older than we expected but low miles), and it has all sorts of perks we have never had. It came in $10k less than the first vans we were looking at mostly the same mileage. We purchased both vehicles for less than we set aside....score!

I drove it home from Anchorage - directly to the DMV. It's got some dings....but our mechanic (Jeremiah at Reformed Auto) says it's an excellent van.  There are so many buttons on it,  I'm intimidated. I was happy to see which direction I was driving (NE), what the temp was outside  (10*), but the backup camera could distract me to the point of an accident if I'm not more careful. 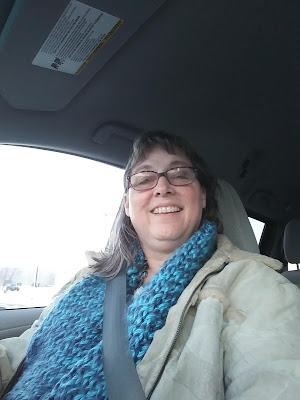 It made me smile to come out of  Freddies and see it sitting there. 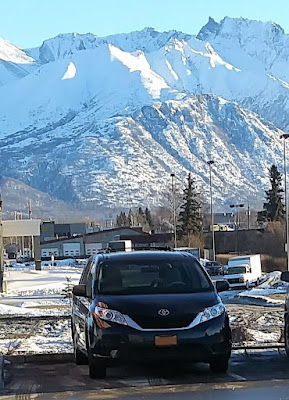 It has invisible plastic shields on the front and back - which I thought were terrible scratches. LOL 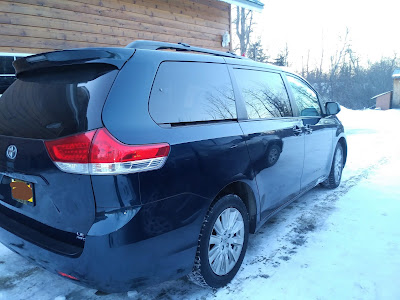 The sellers had always got it serviced at the dealer in Anchorage, and we have all the records. We also have a couple of auto-STARTERS....do you know how nice this will be up here?????? 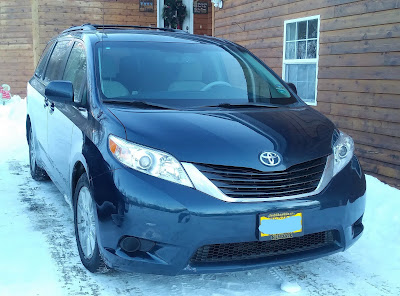 It has phone buttons, mics, all sorts of things happen with the heaters, mirrors and seats... I think I may need to read the manual.  I was sad it wasn't red. The first one Michael found was red. Less miles, newer, front wheel drive and a lot more money. We listened to the mechanic and went with the AWD, low mileage and big money savings. We need to replace the windshield - but I think that's an annual thing up here. I'm not sure the BEST time to replace it. It also needs a new tail light assembly.... 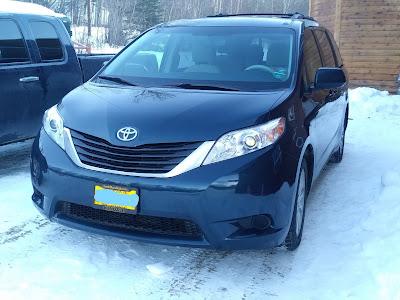 I feel like I am awash in a sea of Air Force Blue (not my color). Both of CoRielle's cars are blue. The truck is blue....and now my car is blue.....but the TITLE says it's green! I'm hoping...just maybe....when I wash and wax it...it will look more green than blue?  I'm really hoping there wasn't a different reason the seller was nervous.

I think I'm the only car in Alaska with an IRE sticker on the back windshield. We wondered if it meant the seller had anger management problems. He told us it's an Ireland sticker.

It was a red-letter day. A new van, a new grandblessing, and a fun Bible study. What do you think? Does it look green to you? If you're local, when do YOU replace cracked windshields?