The Dead of Winter

The dead of winter is finally upon us. Is it the dark days? The frost inside the screen door?  The need to start ones care 10 minutes before jumping into it? The scraping of windshields with credit cards? The sub zero temps?

Tonight, at dinner, we ate the LAST Yukon Gold from our garden! It wasn't the biggest, but it was sweet and it was the very last. Alex had the honor.....
We didn't grow many things well this year. Zucchinni and Yukon Gold's were the exceptions. I have lots of garden space. We've run out o potatoes early. We'll plant more next year.  These babies grew right in the midst of all the nasty chickweed. Why mess with peppers, tomatoes, and corn that won't grow???? 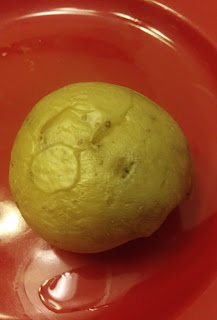 We'll stick with the Yukon Golds and baby reds..... But, for now, I'm content to observe the garden plot under a thick blanket of snow...and the occasional moose, or two, or three, that arrogantly tromp across the plot.

I thought we had coyotes when I went to feed chickens yesterday. I heard a  howling....and every dog in the neighborhood answered back. It continued for as long as I was outside.  Michael thinks it was a wolf. I guess we don't have coyotes.