I have been royally spoiled by my family.  My love tank is full.

I turned 58 today. This is a great day. Somehow, I thought I WAS already 58. 😂Fifty-eight was hard and full of unexpected twists and turns but it was a GREAT year too...and now I get to have ANOTHER 58th year.... though I've been told it's the first day of my 59th year, and so begins the age confusion thing again. ::snort::

I know I was frustrating family as they asked what I WANTED; I honestly didn't want anything.  I did finally tell them I would like a full day without cooking! We talked about tea too - but in the end decided that may be too much to pull off.

Allie got up and made breakfast for Grandpa while I helped him with his morning routine.  SCORE. 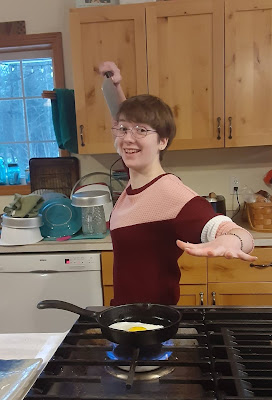 Monday's are respite care and I didn't have to cook lunch. SCORE TWO.   Arielle and the boys came over before Michael was fully ready to leave the house. Benny loves coming over and they often arrive a bit early. THIS time he brought me a wonderful "Baachan TIGER" card. Yep - I have been recently called a Mama Bear and now I'm also a Baachan Tiger. I think that is nearly as honorable of a title.  I opened the door and he yelled, "Baachan! Do you know it's your BIRTHDAY?!?"

Danny has learned a new trick he was happy to share with his adoring fans! I love this photo which Arielle captured.

They had made a few yummy shortbread-like cookies...Benny and I sat right now and had tea.  SCORE THREE. He likes the Sleepy Time tea, "but it doesn't make me sleep."  We left as they talked about finishing school, playing a new game with GG and play dough. 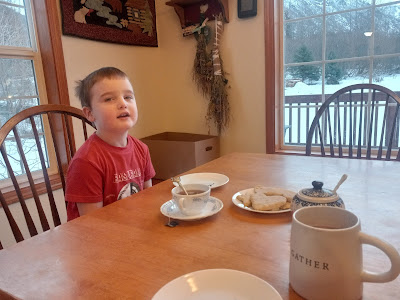 Michael and I took groceries to Bre. We had lunch, cancelled a gym membership, visited Target and got gas. It was all good. We had planned to go to the Salt Cave, but I forgot the certificate.

We came home to Birthday decorations and Benny yelling SURPRISE.

I received marco polos, texts and phone calls from our elder crew of Gherkins. SCORE FOUR.

I went and took a NAP while Stacia and Allie made Veggie Pot Pie (from scratch) for dinner. It was wonderful.  SCORE FIVE.

After dinner they gave me gifts. Millie really wanted into my new bag from Stacia. 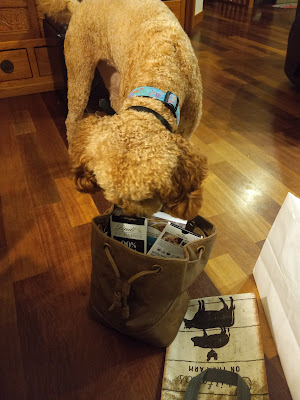 As sick as she's been, Stacia took time to make me a yummy cake. She was not happy with the way the stencil worked but the taste couldn't be beat! It was her signature chocolate cake with a layer of peanut butter between the chocolate layers.  Y'all!  SCORE SIX. 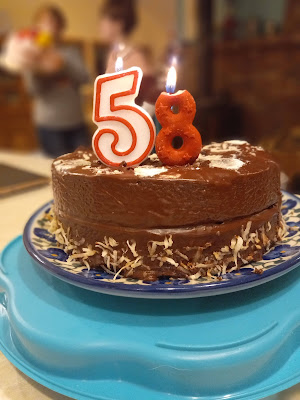 The dirty secret is I sent four pieces home with CoRielle this morning. We don't like having left-over desserts around here. Grandpa cannot resist and we don't like telling him no. 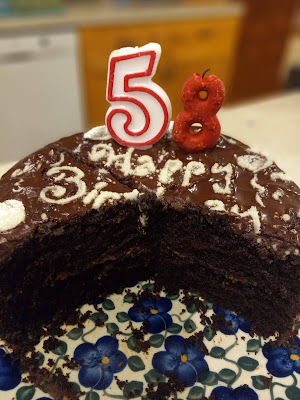 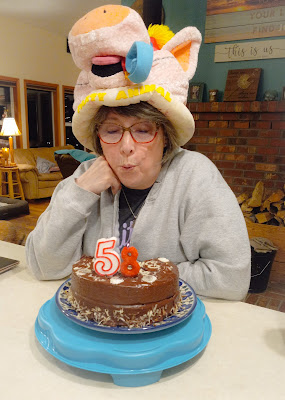 Four years of being meticulous about my HER (healthy eating range) and I decided to simply eat today. I tracked it all, but I had what I WANTED at Red Robin, and I also had a small piece of cake and ice cream - real ice cream. Michael sweetly asked, "Would you like Keto ice cream?"  He was surprised when I said, "Not tonight."  I usually don't make a birthday exception. It was yummy. 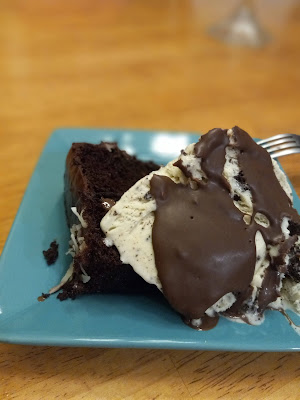 We watched an episode of Jericho after which the girls and Grandpa went to bed. I blogged as Michael is editing a family book he has been writing. I can't wait to get our copy. 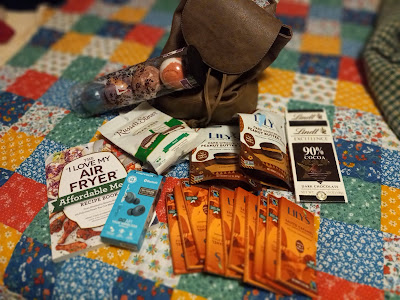 What was in that bag Millie was so interested in? My birthday haul. This and some insanely pretty flowers and details are being worked out for a night out with friends at the THEATER - like a murder mystery play....
Yeah, I know.  Some of you don't approve of my murder mystery thing. I like mysteries.
I'm reading serious books too....like Frankenstein, Emma, and Wuthering Heights. ::snort::
No, serious, Christian leadership and self-help books.