June 1st and the lilacs and wild roses are blooming! This sight out the window greeted me early this morning.  Note our new-found summer privacy as all the trees, hedges and such show off. 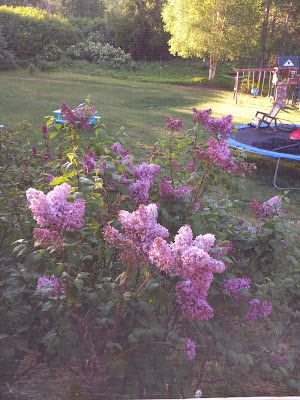 It's summer!  Michael and I have been observing how summer rushes in all at once in Alaska.  Winter lingers into spring. Spring struggles to break through all the snow, slush and mud...eventually things green up and then BOOM...one looks around and all the trees are full, the road and neighbor's houses have disappeared, the lawn is growing, the weeds are racing away, and the sun never sets. Summers are glorious.

Grandpa (Dad) and I had a rough night. He was up at midnight, 4, 5 and 6. He was confused and that leads to issues.  He doesn't seem depressed at all, but he told me at 5 to shut the door and proceeded to say he thinks its about time for him to go. I didn't catch on. He often thinks we should be heading up the freeway or out to various barrios as he wakes up. I said, "Dad, where do we need to go this morning?"

He pointed up and said, "I think it's time for me to go see Jesus and Jan."

Ah, we talked about our loving Father who numbers our days. We can trust him to determine when it's time to make the transition. I told him as long as we are breathing God has a purpose for us to be here and we weren't going to rush things, but we know the day will eventually come and we don't have to fear it either. It's a moment of victory to cross the finish line. I asked him if he was afraid. He isn't.  There have been times in the past when he has seemed depressed and afraid at the thought of dying. He is neither, but very matter of fact. I encouraged him he may rally and feel like himself after the iron infusion.  That's where we are. He sleeps most the time these days.  Honestly, I can remember several times as a teen when I would get a telegram saying Dad was in the hospital and it looked serious. He always rallies.

Nolan's shifts have changed to closings again. They seem to move him back and forth every 3 - 6 months...."The morning or closing (fill in the bank) are struggling, we need you to change shifts." We love when he opens. He's home for dinners, it's easier for him to get college completed, he seems to have more times for social outings... anyway, as he shifts his schedule, he came up at 0800 to work on college at the table. I made pancakes for Dad and Nolan agreed to warm them up when Dad was up and ready for breakfast.

Stacia and I raced across town to take Millie to the groomers. We love the young gal who grooms Millie, but we aren't crazy about the actual cuts she receives. Ah well...I love her long locks...but it is impossible - even with the cool brush and blowing her hair out after baths - to keep it all from matting. They said her legs, body and face were clear of matts...they had to shave her ears and tail. Her tail is like a whip.  I think she looks odd after grooming., all fluffy...I need to google some photos. We are thinking of booking another groomer and seeing if we like the style a bit better...in about 6 weeks, maybe she can go 8 weeks. 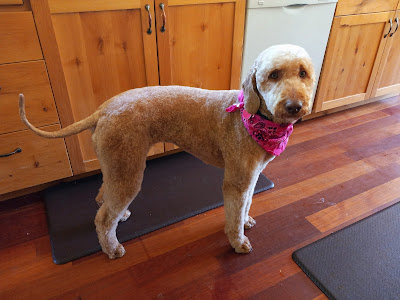 Millie is always subdued when she gets home from the groomers. The change in her personality is stark.
Allie was up and working on a few projects when we got home. She stayed inside and kept an ear/eye out for anything Grandpa may need. This allowed her to continue working on what she'd like to do before she headed in to work. Stacia and I made our way to the garden.
We planted cucumbers and tomatoes in the garden greenhouse. We'll need to get some trellis' set up, but at least the starts are planted. I've NEVER been successful in growing tomatoes from seeds.  These are at least still alive. We'll see if they get big enough to do anything. I have my doubts and have considered buying a few in buckets to hedge my bet....then I remember...seeds want to grow. Michael is thinking how to get heat to the new greenhouse so I can start things like tomatoes earlier in the season.  This year I planted three kinds of cucumbers - all from Baker Creek Heirloom Seeds. I planted some dragon eggs, because I think the grands may get a kick out of them. I don't need to make a lot of pickles this year, we still have a lot from last year's huge crop. I did want to try some munchers and ordered a packet of seeds. Baker's sent me some free seeds called Beit Alpha which was developed/harvested on a kibbutz in Israel. They are supposed to be good for slicing or pickling...so I planted a bit of all of them to see which we may prefer.
I planted Bonny Best tomatoes from Baker's Creek on the left and had more cucumbers so put them in on the right. I'm using the planting guide. I thought this was way too much in these beds...we shall see. Next year I may cut back on cucumbers and add some peppers to the rotation. I don't have any peppers started and so far am avoiding buying lots of starts. I did NOT start zucchini and can't find a plant to buy. I thought we were all sick of zucchini but Stacia would like one hill. One hill they say - that's what I had last year and it still took over. 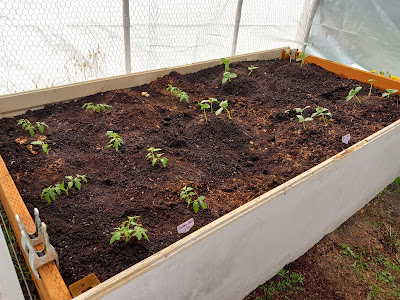 At this point the hour Stacia gives me was up and she went inside. I continued to weed all the beds which are planted, water the new beds in, place another garden flag, up-plant the few cucumbers I couldn't find space for and also up-planted six more tomato plants.  I should have probably thrown them out. I never know how many will germinate and so I plant extra...and this year I am ending up with extra of most things...I need to find someone who would like the little starts.  I may continue to let the tomatoes grow, up - plant them a few times and finally put them in containers as there is some space between the beds and the back wall of the garden house... Thinking of seedlings ALL my sunflowers failed to germinate - as well as the green beans. Bummer.
In other news Stacia reached a milestone today. She completed her novel. I'm not sure how to define or describe the genre...but it's a fun read. It is currently 365 pages long. She said she has to write an epilogue and she's done. I have no idea if she'll let us edit it....I found myself stopping often and saying, "How do you KNOW these things?" as I read. LOL 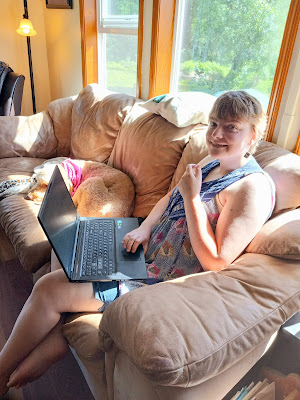 Michael started work on the yard and needed to run to Lowes for more supplies. We are trying to weed and feed our entire grassy yard (not the woods, obviously).  I think we need a flame thrower for the devil's club and stinging nettle. We had bought two large bags and he needed to go back for more. He also bought a walk behind spreader. He is set to tackle it again tomorrow.
Stacia and I grabbed dinner, left dinner for the others, and headed to church.  Allie was at work, we miss our Allie. When we came home Michael and Dad were watching Zuthura. We were more interested in taking some hot drinks out to the porch. Can you believe THIS? Warm enough to be outside AND bright sun at 9:30 p.m.? 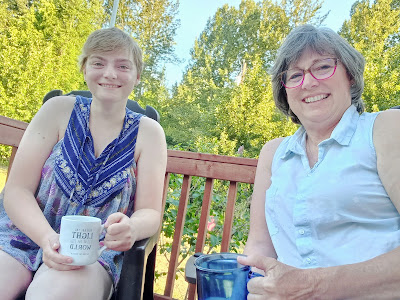