I opened my browser to search for a photo of a frazzled mom - this week BEGS for such a graphic....then I remembered.......one of Rick's recent Copy & Share if You Dare doodles. Ah, now I can blog with the knowledge that I'll have a link (above) and a graphic...a respectable entry indeed.

The truth of the matter is that I've been OFF all week. Stark-Raving, chew-my-nails, stressed-out, insanely "off".

I haven't a clue WHY. I have consistently thought it was one day, when it was another. I MISSED important things I wanted to attend - like Heather and Jesse's baptism. I've shown up where I was NOT suppposed to be. I've just been off. Not nearly as "off" as this little lady however. 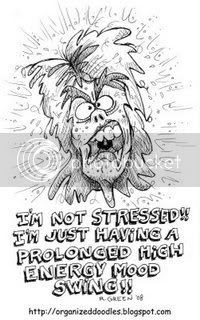 My to do list is ever-expanding and shrinking. It's like a GIANT AMOEBA! And I know my amoebas. I HAVE gotten a lot done this week. There are the normal things: speech, PWOC Bible studies, SHS, school, piano lessons.... I also accomplished some "abnormal" things: Jamin's portfolio is mailed, I solved our childcare problems for an upcoming conference, I paid bills, I coordinated our group's United food order, I contemplated getting all sorts of regional loose ends tied up for PWOC, and just today I rearranged the furniture a bit. WHY? Because that is what one does if one is me and in a state of high energy mood swings. ::snort::

Today at piano lessons Zander and Lois cracked me up. Lois attends PWOC; that makes her one of "my ladies", she also homeschools and used to play with the Air Force Band. I am so greatful that she is giving Arielle, Nolan and Zander lessons. No one thought Zander was going to take lessons. Zander is 6. Zander has all his "alphabet" issues. Zander fixated (obsessed really) on the fact that he was going to take lessons. Lois was willing. I tell her each week that I'm not sure they'll make it 30 min, that I'm o.k. if we have to do songs over etc. The thing is Zander won't let ME help him learn piano. He doesn't read. He doesn't know the alphabet. He hardly ever sits still and he's decided to learn to play the piano. We are three weeks into this and I gave up this week with his practicing. He has his OWN way of doing things. I won't attempt to explain. He is taking GREAT JOY in playing the piano and once in a while it sounds like you would expect a lesson from Bastien Primer to sound. Each week he sits down and PLAYS the songs for Lois. Today, however, there was a new piece. It was circled. She said, "I didn't circle that, Zander. Who circled it?" He told her he did. He wanted to play it. He played it!!!! He wondered why there were no dots (repeats) on this one.....she asked who helped him learn the song. He told her, "I did it my own way". And he did. ::snort:: But it was right! So.....he'll let Mike show him a few things, but he's decided that *I* cannot possibly help with piano lessons.

Hmmm....we ate at Burger King tonight. You KNOW you've been too busy when the manager opens the door for your family, welcomes you to dinner, has the cups set out for you BEFORE YOU ORDER, and someone says, "here they are" when you walk in....and THEY have the fries dropped and can tell you what you will order. ::snort::

When we get home from camping I'm getting my life back into some semblance of normalcy.....and I'll pretend September didn't exist. ::snort::

lol! You're too funny. I don't rearrange furniture, but I do reorganize closets and cupboards. Don't ask me WHY... why would I spend time doing anything that isn't even seen (LOL) when I have a zillion more important things to do...It somehow helps me focus, I suppose.

Hopefully you can relax and recharge while away.

Take it easy babe! Alexander is a kick..... he may be a natural.

Had a nice meal with David/Bre tonight.

Mikhail is here, their Beagle is here also.

A couple of things which may encourage you, DeEtta.

Grace's ASD was not a hindrance, it was a positive blessing when it came to music instuction (singing and piano.) All the kids with ASD we know who have taken up the piano have excelled at it, unless they moved on to other instruments.

Jack learned to play the piano and follow the notes before he could read. I asked his piano teacher if we should wait until he could read (I'd read that somewhere!) and she said no, that reading was not a pre-requisite to learning to play or to sight-reading. And, in his case, she was right.

I think Zander will do very well! May the Lord bless his enthusiasm!