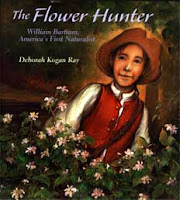 We have really enjoyed reading The Flower Hunter , by Deborah Kogan Ray this week. Deborah tells the story of William Bartram, America's first naturalist using his journals, maps and drawings. The end of the book has a bibliography, biographical notes and a list of Bartram's plant discoveries. The book also contains an engraving by William Bartram. "Billy's" father, John Bartram, was His Majesty's Botanist to North America, making him America's first Botanist. Benjamin Franklin was a close friend of the family.

If you are studying Colonial America, Botany, or Nature Studies this book would make a great addition to your study. I would imagine American libraries would carry it.

Zander had trouble with recalling sounds in, Teach Your Child to Read in 100 Easy Lessons, and so today I simply went to the list of sounds in the front of the book. He nailed them all.....but again had trouble with them in the lesson. In the list there are NO helps - just the letter. I wonder if the arrows, pictures and such distract him? Anyone with a child with sensory issues on the spectrum had experience with this? The good news is that now he's obsessing over learning to read, excited about it, and now we're finally learning to read. I told him he had to finish 1st grade this year. I'm ready to move on. ::snort::

Sorry De'Etta, I don't have any suggestions for you. Matthew insists he can't read, but he is. LOL We use Explode the Code and that has been a good fit for him.

Our A.J. is 10 (4th grade) and reads at a 2.6 grade level. He's been in remedial reading since 1st grade. Last year he finally made the transition from sounding out letters and combinations to seeing the words as a whole and not it's individual parts. For him it was like seeing the pieces of the puzzle, but not the complete puzzle picture. Is this similar for Alexander? In RR and through the summer one of the resources they/we used was Explode the Code too. It made sense to him, he liked it and he was comfortable working independantly on it. It helped build his confidence because he didn't need help.

I've been considering adding Explode the Code for him. I've always used a systematic phonics program - Sing Spell Read and Write....but HE hated learning one sound at a time and wanted to learn to READ.....this program isn't as systematic - probably just that I can't figure out what their system is....but he IS reading....and learning to sound words out in his mind and say the whole thing, hasn't learned all the consonants...but has learned many and some short and some long....I think they teach in the way it most often occurs? Not sure - based on distar.....anyway - I did it over Sing Spell Read Write and ETC because he wanted to read NOW....maybe now that he's reading a bit he'd be happy to go back to the other way.....

No real help w/ the reading issue other than to say we used ETC and a phonics based approach to reading. We did try 100 EZ Lessons and my kids didn't like it at all. I have one son w/ ADHD, NLD and a learning disability in reading. I have taken my time w/ him and followed his stress level, he gets frustrated very easily. Vision therapy has been the real turning point for us. His reading level has gone up several grade levels in a year. You can google vision therapy.
All that to say my parents graduated from, none other than, John Bartram High School in Philadelphia, many moons ago. lol
Laura J.

Sounds like he is having a retrieval issue. List retrieval is easier than reading retrieval. I bet if you added some written work to the mix he would be able to make the needed connections.

I don't know the science behind this...but I know that when we added some form of physical writing (whether in sand, or chalk or paper, consistently and often) it gave him more opportunity to retrieve the information in a variety of different ways. It's sort of like building a bridge. The information is there...but a bridge must be built so that the sounds can then travel over the bridge and come out on the tongue. The more the bridge building process is used...the stronger and more stable the bridge.

When I teach, I use say and write everyday and play (phonics games) as frequently as possible. We'll even throw in air writing, or running in the shape of a sound in the backyard, etc...

Yes, it could be too that the arrows and whatnot could be confusing. In my opinion, anything that clouds the connection between the letter and sound would be like a roadblock on that bridge in the mind.

We used 100 Easy Lessons and they were the hardest lessons we ever tried. (Honestly) This was with my auditory processing challenged child. Plain and simple - the program was a flop for him. He needed systematic and intensive. (Which is what I believe your other program is...)

How far is he? Jon had problems once he was around lesson 20. I found that with him, he needed more practice before moving on. We bought lots of programmed readers and it helped to cement what he was learning. We used I See Sam books at first. They allowed lots of practice and would only have one new word in every other book. Once he got to new sounds not learned yet, we'd go back to the book and work again. It really helped him to feel successful in reading also.

Have you ever looked at Alpha-Phonics? That is what I used for Ben who has/had sensory issues. We tried 100EZ Lessons and it wasn't a good fit. In the first lesson of Alpha-Phonics the child is reading short words. It makes good progress. I bought a small blank slate. I would write his words on it. If he got them all correct, he would add a sticker to the frame. It worked great. He now reads at an adult level (he's now 13).

Yvonne - it IS retrieval. He can see a list of the letters....nothing else on the page and say the sounds....during the lesson he can get about 70% of them.....so I was thinking we had a huge problem until I realized that he KNOWS the sounds on the list.....

Writing - I've been skipping the "sound writing" feature.....and yes Sing Spell REad and Write is systematic and includes writing. Hmmmm....going to add some writing and see what happens.

Lisa - never heard of I See Sam...I'm doing the same with Bob Books - but TYCTR doesn't follow the "normal sequence" of teaching sounds (as you know having used it) so finding readers is my challenge right now. I'll google. Thanks.

We did use Alpha Phonics for Krista - our dyslexic. I should see if we still have it. I may have sold it last spring. LOL

Thanks ladies...good tips all. Have you ever hit a spot where your perplexed and then the advice you get is the very stuff you've shared with others? I love you guys!

I have lot of Saxon Phonics here. I could send you kinder readers and first if you PROMISE to send them back. My grandson is only two- but I can already tell....it may be Nana homeschool for him!
Email me your address if you think it is where you want to go.

This is kind of out there, but... if there's a lot of distracting stuff on the page sometimes using a sheet of clear/colored plastic can help - it reduces the contrast between the writing and the page (usually black and white).

Do you know the things I'm talking about? I have three of them, yellow, blue, and red - to show color-mixing. They're like overhead sheets but colored.

D, I'd go wioth Yvonne's suggestions to reinforce with writing. And just to say that many spectrum kids have problems transferring knowledge/skills from one context to another.

Praying it all adds up for him.

I don't know if it's the markings or what not but for some reason 100 easy lessons didn't work for both an AS kid and a typical one here. For my firstborn Saxon phonics is what finally helped him. I'm sure it was the large letter sound and word flashcards which helped him the most. Large letters. plain and uncluttered.

Yes I have definitely gotten advice that I already knew before and found it the most helpful. When you're in the trenches of something it can be hard to see the solution.

Still fighting the good reading fight with my youngest (and he's older than Zander) just surrounding Tristan with words computer curriculum, read alouds, worksheets and extra work with words on my days off. Just like with potty training they do all seem to get there in the end it's just hard to imagine the end when you're in the middle of it :-). Zander wanting to read is the thing that will help the most so maybe you're nearly there!

I'm sorry if some of my comments didn't go through I might have missed the word verification, oops just saw it!

We used 100 lessons for about 7 lessons. I didn't get the bouncing dots....reminded me of the old Sominex commercials! Have you ever used The Writing Road to Reading? I know it's cumbersome and I modified it immensely, but it really connects the writing and the reading.

Well, I am clueless on educational things, HOWEVER, as Jun was going to bed last night she commented that Alex and Arielle were "practicing reading" at your house and so I had to "REMEMBER, MAMA" to practice reading with Jun today! Thanks to your kids for the great influence!

Hi --love your blog--have been reading it for a few years now.
Here is some different advice. I taught reading before my kids were born and then taught all my kids BUT my middle son has lots of learning issues so... we went a different route and did sight reading using Dick and Jane readers. I used cards and introduced each word to him. The stories build on the previous ones. So we just added to our cards each week and he would read the cards and then read the story. His comprehension is great b/c he is not having to use his energy to decode. I teach him phonics in spelling instead of reading. The Storybook Treasury of Dick and Jane is a hard back of several books put together and worked much better than trying to use odd ones that I saw at the store. Sight reading built his confidence and then he took off and was able to read any easy reader at the library.
So that is my .02 I hope it helps!

Thanks for the book review. Our library does have it so I just put a hold on it.