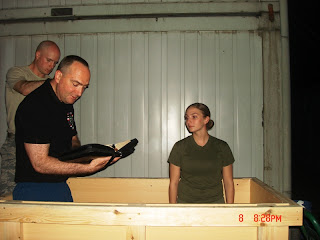 It is not too often that you have the privilege and honor of baptizing someone in a deployed environment, but this was one of those moments. It was a few weeks ago that Amber asked to be baptized. This began the search for a suitable baptistry. We began by asking our woodshop folks for help, but then saw a packing crate that appeared to be very adequate for the job at hand. We had the woodshop guys come by and shorten it a bit. We needed to line it, but could find no plastic anywhere on the compound. It was just as well because when we were giving the crate a very close inspection, we noted that there were a significant number of lag bolts missing from the bottom. Basically, if we had tried to use it, the sides would have blown out.   Not good. 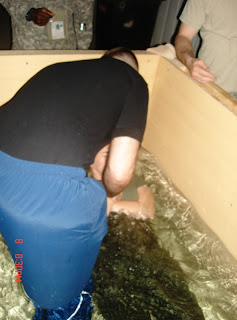 We then had the woodshop guys build one from scratch. They had it done in under an hour. They came by to caulk it shortly after that. It did spring a couple of leaks, but we were able to stanch the flow of water just long enough. We threw in a few buckets of very hot water, and we were ready.
Amber had never been baptized. We spent a little bit of time talking about the meaning of baptism. The next day, after the evening service, we had the actual baptism. We read a bit of Scripture, and then we rehearsed the technique so she would not drown (it is always good to avoid drowning, particularly in this setting), and then came the moment. She affirmed her faith in Jesus, and then in the name of the Father, the Son and the Holy Spirit... It was a great time.
I hope to do a couple more before I am out of here.
Blessings - Michael

Ah, I can't see the photos!

Our wonderful son-in-law. Sounds like ministry is happening in Afganistan. love/prayers - US

My son in law may be there before you leave. Maybe he will run into you...but your tub will have to be a whole lot larger- he is 6'5".
I'll keep this one in my prayers.

Have him come by. I would love to meet him.

De'Etta, pictures are now there.

I'm so proud of you. The ladies at the receptionist desk at NHCC said to tell you "thank you!"