Yep - snow....lots of it. The kids spent several hours playing in it, reconnecting with friends in the neighborhood. Eventually, they were ready to come inside.  They invited a sibling group from down the road inside with them. Hot chocolate, snacks and games.


I continued unpacking bags (about 1/2 of Michael's and mine are done).  I joked early in the a.m. that I was donning haz mat and chem gear to clean out our fridge. I found ingredients for turkey/rice/veggie soup, which I put on to simmer while I continued on the fridge.  It turned into an ALL DAY chore...but it was NICE to have it done when Michael brought home  milk and produce.  No before photos as it was too terribly frightening. BreAnne I DID find two bottles of Mountain Dew in there from your visit last summer. ::snort::
Michael was home late and so the kids and I ate dinner and then played a few rousing rounds of "Hello Kitty Bingo," while waiting for him. ::snort:: 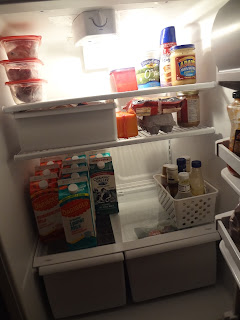 Joyfully Penned by DeEtta @ Courageous Joy at 2:00 AM