I'm hoping Zander and Stacia remember all they learned today when we study the Korean War. I'm sure the rest of us will. Today we visited the Imjingak Park, the Unification Bridge, the DMZ, the Third Infiltration Tunnel, Dorasan Observatory, Dorasan Station, the Amethyst center and Itaewon.  Yes, we did discover some blisters along the way. 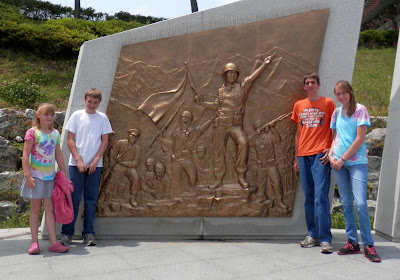 Peace Bell - hauntingly similar to the Peace Bell at Hiroshima 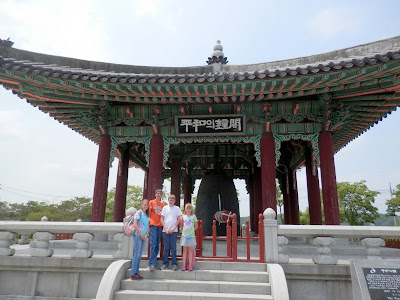 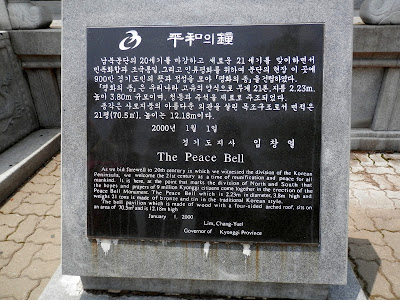 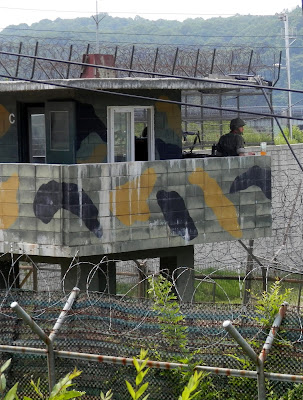 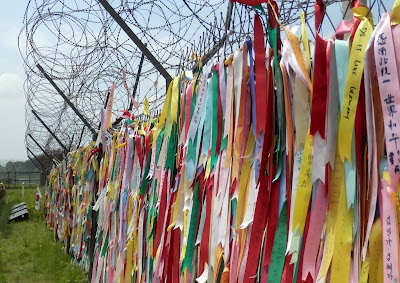 This train is riddled with bullets...this track is no longer operable 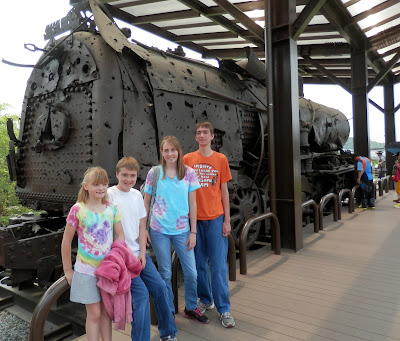 Tours of the DMZ are given for two reasons according to our guide: 1. to make money and 2. to civilians from all nations is a deterrent to the North....there are 4 K separating the southern line and the northern line....with the DMZ running through the middle.  There are a couple of villages in the zone....gotta love their tenacity.

Kim, our tour guide - pointing out the Demarcation line, the DMZ and various villages. 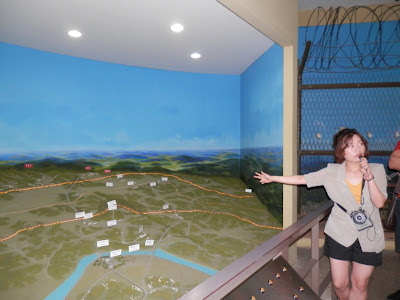 We watched a 7 min dvd here about the DMZ....they are trying to get the world to see this spot as a spot of hope and reunification....but as Arielle commented...."It seems they opened the door and the North slammed it in their faces." There was hope in 2000 - 2002 that Korea would be unified. 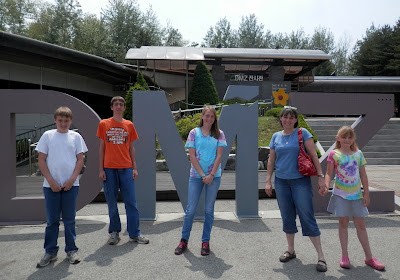 Symbolizing the hope of the two becoming one again 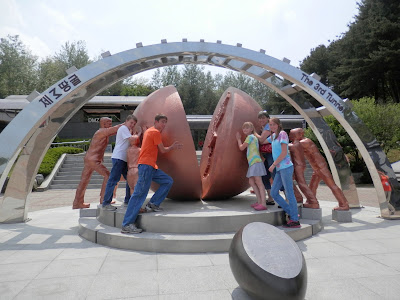 A defector in 1974 claimed North Korea had built 20 infiltration tunnels. Four have been discovered. We visited, and climbed down into the third tunnel. We went UNDER the DMZ.....the tunnel is 73 meters deep....it was INTERESTING...and quite a hike back up. I'll include this shot with more info. Unfortunately, we had to put our cameras in a locker at this point and got them back as we finished our visit. 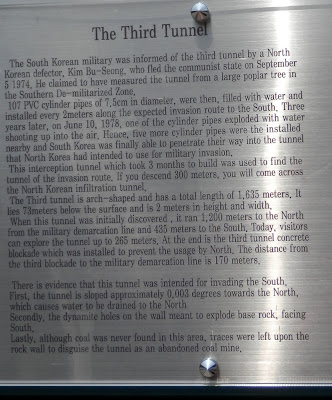 From Dorasan Observatory one can see the flags of North and South Korea flying in their respective villages. It's easy to tell which parts of the country are North Korea as there are no trees. We were told it's because they burn the trees and they want to be able to see clearly what is going on.  I couldn't get a good shot of the flags as we weren't allowed to take photos beyond a yellow line - which I was standing on to take these.  A bit of a "flag war" developed with each country wanting theirs higher. South Korea finally decided they didn't care and  North Korea has the distinction of having the highest flying flag in the world. ::snort:: 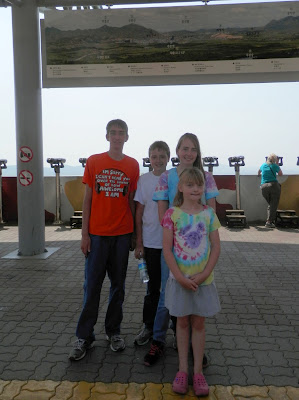 There you have it - North Korea 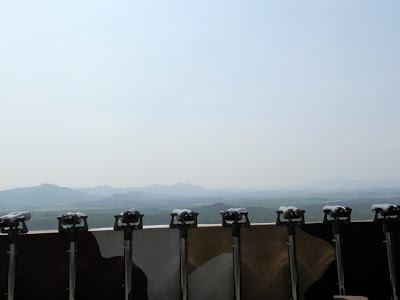 This station was built in 2000-2002. It is the most northern train station in South Korea. The dream is that the line would continue in to North Korea and the countries would be reunited....there would also be a Trans Eurasian Railway.....a dream which hasn't come to pass. We passed the industrial complex which has recently been shut down. 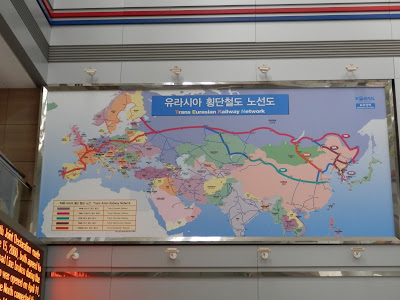 Positive Attitude displayed....km is to capitols 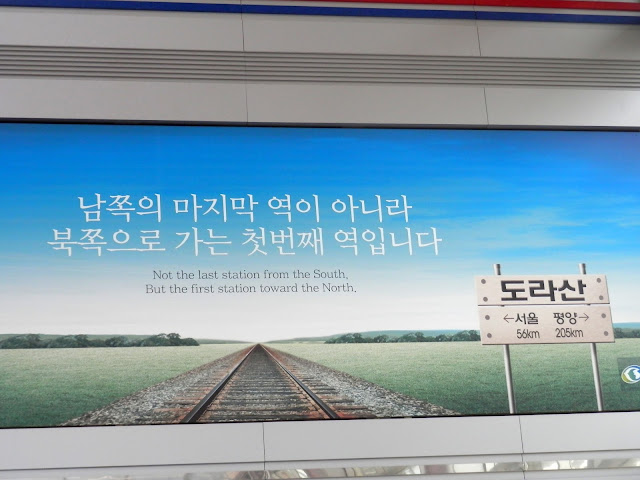 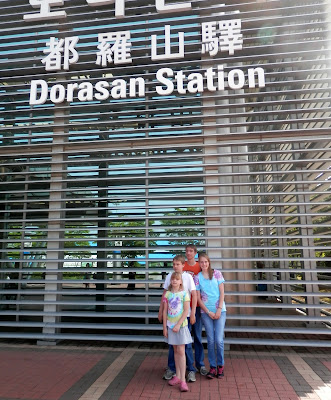 I wasn't impressed with the forced run through a fancy jewelry store....didn't take a single shot. The amethyst IS gorgeous - the prices not so much.

We got off at Itaewon and scouted up some lunch/dinner at Smoothie King. Stacia spent all her money (and some of mine) on sunglasses. We found some tangerines and I bought Nolan a back pack as I discovered the seams of his are split...he needed a new one for the trip.

The kids saw first hand what I meant by watch for traffic, don't just step off the curb when the man turns green....and I think some drunk congratulated me on my pregnancy.....and I'm not. ::sigh:: 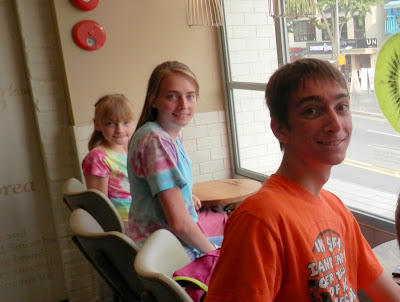 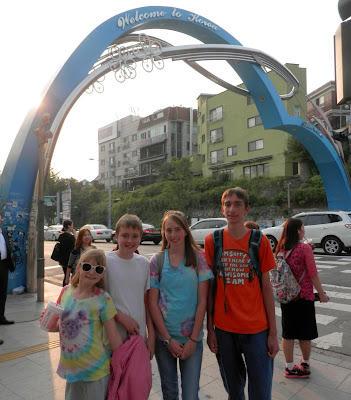 We found our way back to the post and the pool at The Pointe. Soaked our blistered feet and all hit the bed early in preparation for another full day tomorrow.

Finally, we were told a couple of times today that large families as ours are uncommon in this time....we would have taken ROK by storm if all nine Gherkins were with us. ::snort::

Joyfully Penned by DeEtta @ Courageous Joy at 4:06 AM

you are so adventurous. Two years in Seoul and we never went to DMZ. Some of our kids were too young (can't remember the age cutoff) and I was afraid to take that trip without them.

We did not go to the JSA (Joint Security area). No one under 10 can visit there. BUT we did get a good idea of the area and the tunnel was worth the climb.

Hi you all: Goodness...the places you go visit and the experiences you have could make one G'Ma jealous. Not Really! But how special you do this for the kids and for yourselves. Wonderful parents! Lifetime experiences never to be forgotten.