We're in the Republic of South Korea


First - Happy 26th Birthday to Krista! We are incredibly proud of the woman of God she has become! I can't wait to hug her neck in 6 weeks.

We got the last five seats to Osan AB, ROK.  I thought this would be a QUICK trip; but there seems to be no really quick way to get from Misawa to Seoul. We began our "trip" at 1000 when we signed in at the AMC terminal in Japan....the plane didn't fly until 1315 and we landed around 1530. THEN we had a briefing to tell us HOW to fill out forms anyone traveling internationally has filled out many times before....the juggling of people OUT of the briefing to the custom lines was HILARIOUS....it seems whoever is briefing excuses those in HIS particular category and leads them to the front of the customs line....So Army Active Duty; Army Families on leave, Osan Security Forces,  and finally "Air Force Families on leave"...the last shall be first? In an illogical move that must make sense somewhere we were escorted to the front of the line that snaked down the hall and then just left to stare at those who were already occupying the front of the line. After a bit of hesitation we simply began to process. I don't know why it was done this way.  We had an hour wait before the bus to Seoul. We used this time to walk to the lodge on Osan and check out hotel possibilities if we aren't able to extend here in Seoul past Friday.  We finally stepped into our rooms at 2000. The 2 hour trip took 10 hours. ::snort:: BUT WE'RE HERE!

We ate dinner, checked out the hotel, got stuck in the elevator a half dozen times and unpacked. We also picked up a few brochures to see if we can figure out what we want to DO now that we are in Seoul.


I got in touch with my inner packer and packed to shop.....a 1/2 filled suitcase within an empty suitcase....now to find something with which to fill the cases.... 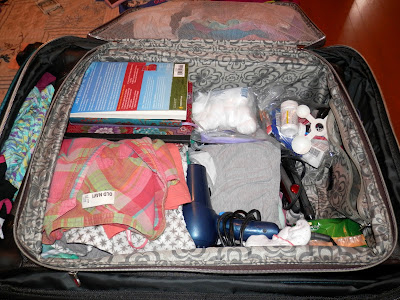 The weary travelers...happy to be at the Osan Bus terminal. 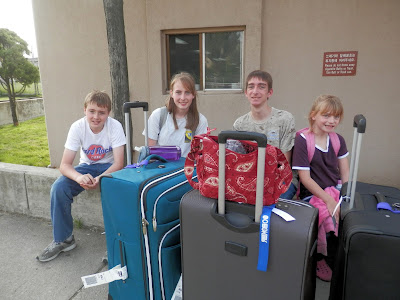 Zander has serious travel anxiety. I'd not realized it quite so clearly as I did today. He worked himself up to hurling....he was sure his chest was going to explode....and finally coping mechanisms kicked in...he simply spread out and closed his eyes at odd times throughout the day...but hey...he relaxed....and it is sure better than some of the other coping techniques he's tried throughout the years. I honestly believe he'll love the trip once he gets used to the idea of not being at home. I'm also thinking I'll ask the docs for some sort of kiddo Valium before the long flight in July...better living through chemistry. 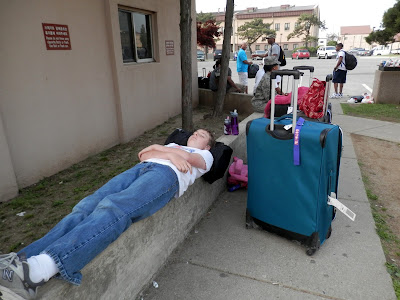 Joyfully Penned by DeEtta @ Courageous Joy at 4:54 AM

HI: 8 hours of extra rest time while traveling isn't bad. HA! Who am I kidding. So glad you are all settled and ready for a neat adventure.

Going to email Alexander a bit so he will feel a bit connected to us and Springfield when he gets here. Tell me no if that is a bad idea.

Give Mike and the Kids my love and tell them I am anxious to sit and visit all about the trip when they get here. love/prayers - mom t.