It has been a week of contrasts.  The office has been horrendously busy.  Put De'Etta and the kids on the airplane for Korea on Monday as well as taking care of a few outprocessing items.  Said farewell to some chapel friends on Tuesday.  We had the memorial service for an airman who died as a result of injuries from a sanctioned boxing match on Wednesday.  Really quite a sad and bothersome affair.  He was well-loved and a standout amongst his peers.  On Thursday we had a picnic with one of the units on base.  It was well-attended and a lot of fun.  That evening we also had our annual baccalaureate service.  We are finally getting other churches involved in the ceremony.  It was what we have wanted from the beginning.  Friday was spent trying to get "stuff" done.  The best part of Friday was catching the last bit of the Spurs and Heat game and watching the Spurs win game #1 of the NBA Finals.
Around the house, though, it has been very quiet.  As much as  I have had lots to do at the office and around the base, I have to get home at a very reasonable time otherwise Yuuki will leave little personalized "gifts" around the house.  With the exception of one day, she did well.  Couple of the days we went out for walks on the country roads out in our area.  She really enjoys this, sniffing at almost every little tuft of grass and bits of who-knows-what on the side of the road.  I am trying to come up with a fitting comparison with a dog and its sense of smell and what people could relate to.  Maybe it is like being in a room with many conversations going on and having the ability to listen in to any particular conversation you so desire.  Sort of like a dinner party where it is not eavesdropping; it is just part of the environment.  Some "conversations" cause Yuuki to snort and walk away.  Others really get her attention.  I wonder if I am pulling her away just before that funny guy gets to the punchline of some doggy joke.  Who knows, but she really enjoys sniffing at things.

We went to Momoishi beach one evening.  I let her run free.  I thought better of it when I found a dead bird carcass, but by then it was too late.  Besides, she should be smart enough to know better.  When it was time to leave, she was nowhere in sight so I drove down the parking lot a ways.  Not there.  Drove back, and she was looking for me.  All's well that ends well

I began to think about what to do on Saturday early in the week.  I really liked the idea of running out to Mutsu Bay and exploring a beach we had never seen before.  So that is what we did.  I think I found the access road, but when I was leaving I found another that was a half mile further up the road.  If we do it again, I will take the second one.  It bypasses a lengthy stretch of concrete shoreline reinforcement.

The water was very low and almost a dead calm.  I turned Yuuki loose, but she did not follow me very far.  It was that "conversation" thing again.  I must have wandered 1-2 miles up the beach before turning around.  The water was almost mirror-smooth.  The seaweed colors were a bright, vivid green and yellow.  There was virtually no one out there.  Just Yuuki and me, well, me and Yuuki was somewhere... 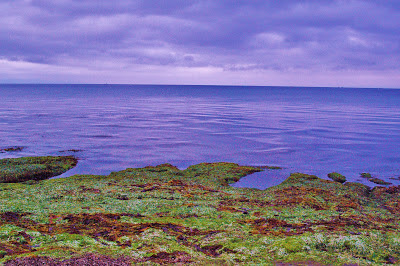 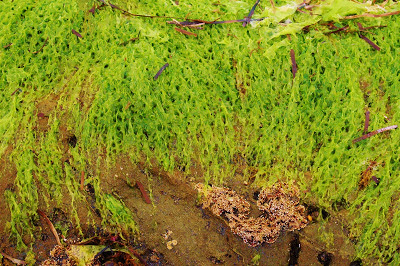 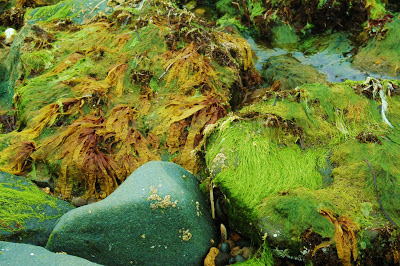 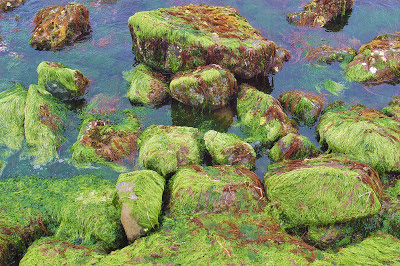 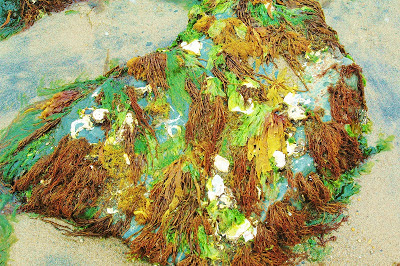 I found this winch under an awning.  Judging by the decrepitude of the engine and the amount of rust on everything, it had been abandoned for quite some time.  However, just behind the winch (you can just see the bottom of the hull at the top of the photo) is the boat.  It is as if someone just winched it up one day and never went back. 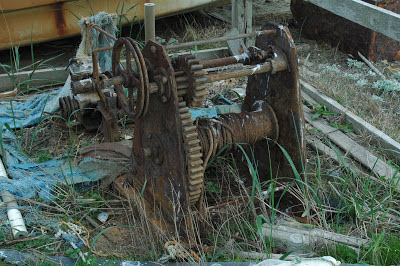 These tetrapods are just like the ones at the ocean near my home in CA.  These have been standing as silent sentinels at the edge of this beach for quite a few years, but they are showing some significant wear and tear from the heavy surf, high winds and rough winter weather that is so common to this area.  Mutsu Bay can be a very poor host to visitors and locals alike.  There is a reason there are so many broken fishing boats along this beach. 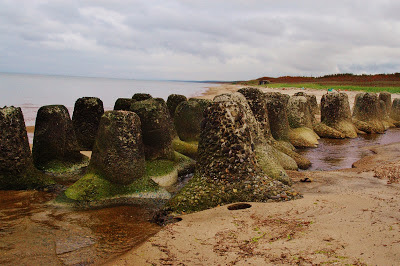 If you look carefully at the above picture, you can barely make out this fishing shack over the top of the tetrapods.  It, like the winch mentioned above, shows all of the signs of having been long-abandoned.  The exterior is rusted; the wood siding is fallen in and missing in many places.  The window (barely visible below through the opening on the left) is broken.  There is a table and benches in the foreground that are also showing considerable wear, tear and decay. The inside was a study in contrasts.  Like the boat near the winch, this cabin has all of the marks of a place that was left in a very orderly manner.  When I opened the door, I was greeted by slippers by the front door.  There was also a tea kettle on the rusted wood stove (and a second one on the floor next to the stove) and all of the blankets were neatly folded and laid on the bed.  There was still a clock on the wall and some personal belongings neatly arranged on a bedstand.  It reminds me of a time when I wandered around in the old Crippled Creek ghost town in CO (not the new one with condo's, casinos and rich folks - the real one). 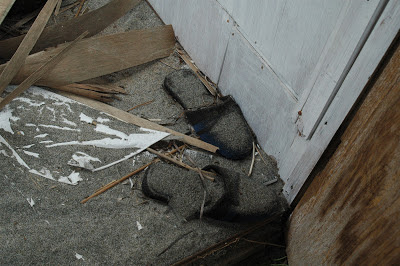 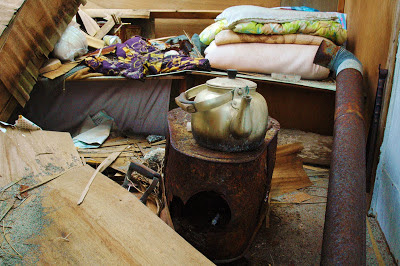 I finally found Yuuki as I was on my way heading south.  She was running a long way ahead of me.  No matter how much I yelled, she just kept running further off.  When she finally turned and saw me, she started to come slowly, hesitatingly.  It was as if she could not recognize me.  It was only until she was within 75 feet that she realized it was me and began running to me.  It did not hurt to have a doggy treat for her either.  That helped her to stay close for the rest of the walk. 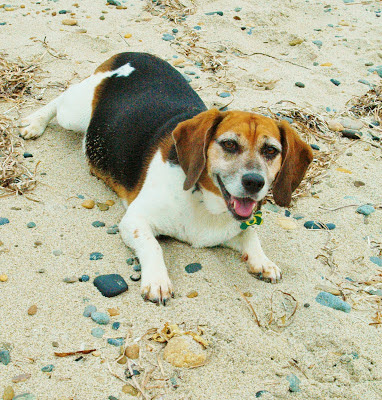 This portion of the land above shipwreck beach is peculiar.  There are rumors that this was once a runway.  It definitely has the markings of an old runway.  There are concrete structures all around to indicate that something big happened here.  The main rumor is that this was where the Japanese Imperial Navy learned the techniques and trained its pilots on how to attack Pearl Harbor.  I have rooted around but not found a specific reference to where they trained only that it was a "hidden bay." 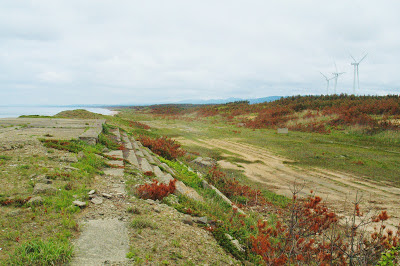 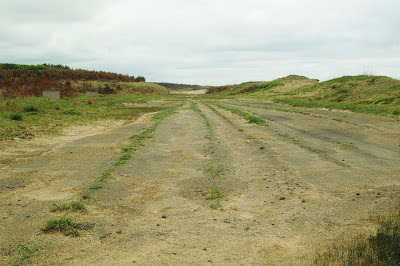 Perhaps this is all that remains of either workshops or living quarters.  Due to the regularity of size and because they are rather small, my bet is on living quarters, but their proximity to the flightline could easily dictate workshops or storage buildings. 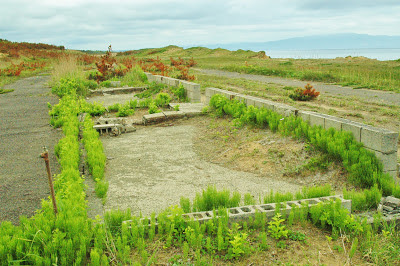 By the end of our 5-6 mile walk at Mutsu Bay, Yuuki practically collapsed on the floor of the van.  She later got up on the seat (I had it covered) and went to sleep there.

We stopped at the Community picnic for an hour.  It was fun.  Yuuki was making friends with lots of folks and making life difficult.  It is difficult to juggle a plate with a dog pulling wildly one way then another.

That pretty much wraps up our week so far.  Tomorrow is Sunday.  Rev Mc is preaching.  Looking forward to it.  --  Michael

Joyfully Penned by Michael at 3:02 AM

Sounds like a fun day, Hon. Busy week! We're looking forward to being home.....glad you let yuuki run...I've been suspecting she'd come back but we were all too chicken to take a chance. LOL Love you.