Saga of a Retirement Cake

I'm pretty sure this will preach - but I've not figured out how at this point. ::snort::
Backstory: I visited the commissary and asked about having a cake with the Chaplain Corp logo on it for Michael's retirement. Their printer turns yellow green. They suggested I go off base. It was a SIMPLE cake. I just wanted the logo and a few words on it. What could go wrong?
I stopped twice at Walmart to discuss what I wanted. We were set. Logo in the middle, a bit of bling, full size cake, words centered or arched around the logo - CHOCOLATE.  We were set.
Krista and Jamin left an hour before we were due to pick up the retirement cake. This would give them time to pick it up, pick up a few items we needed and be back in time to drive to Sacramento to pick up Josiah.
When they arrived they were told, "We're just working on it, come back in a few minutes." They did. The cake was boxed up - usually they show it to you and ask you if it's "ok." Standing in the check out line, Jamin opened the box.  Um......he sent a photo to me and asked, "Is this ok?" 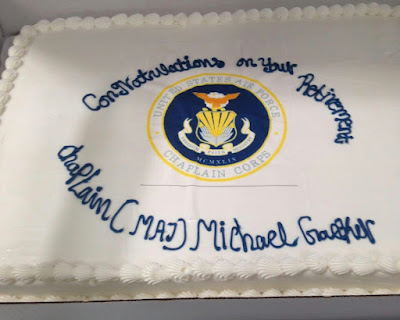 Oh my.....the logo is wrinkled and you can see the edges; you can barely read the writing, the name is wrong - it's just all very odd. They took the cake back and asked them to please redo the writing.
AT THIS POINT they were told that three cake artists called in sick, none of them were trained to decorate cakes and this was the best they could do.
They brought the cake home and jumped in the van. As we drove, Jamin mentioned it still wasn't "perfect." We asked Larissa to send us a photo of the second attempt at the cake. 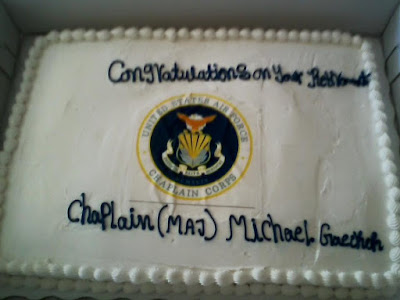 The words are not centered, again the name is wrong and the size gets smaller and smaller.

Yes, we did pay for the cake. There were lots of  suggestions of how to fix this from the kids. Waiting at the airport the hilarity of it all struck me.  The cake is certainly NOT going to ruin retirement. I decided to take it to the commissary and ask them if they could remove the logo and use it or fix the writing.  If they couldn't I would pick up a plain cake, have them write Congrats Ch. G and then plate this cake - no one would see it at the event.

I showed the photos to the baker at the commissary. She assured me she could fix it.  They had put white over the top of the words and written on top of it. She scraped it all off. She even fixed the emblem and added some pizzaz along the edge - all for $5.  She's our retirement hero....and Matt but that's another story.

None of us had been nasty to Walmart.  We sensed we had a new family story that would be told for years. All was well - my plan was to talk to the Walmart store manager after retirement - because this really isn't good business. "We aren't trained - this is the best we can do?" What about telling us when we showed up early that the decorators were out? We would have paid for the cake and taken it to have it decorated for REAL. I don't mind paying something - we DID eat the cake.
We were to have one more surprise at the reception. The cake was not CHOCOLATE! 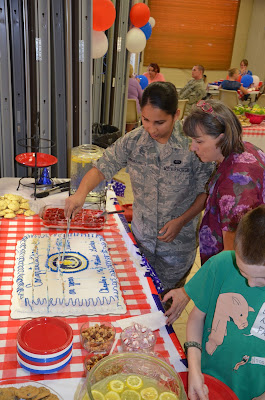 I do have the photos, receipt and the original order showing we asked for chocolate. I'm taking Mr. Retiree in with me on Monday to talk with the store manager - as opposed to the bakery manager. Again, I don't mind paying something but we should get some sort of discount- it wasn't the right flavor and another bakery had to make it presentable....I'm not sure what is reasonable to ask for.
Betsy - this photo is included just for  you. I'd thought the official niceties were over and slipped off my shoes. They asked me to come get photos at the cake....I forgot. Yep - shoeless at retirement.....great way to leave the Air Force. LOL 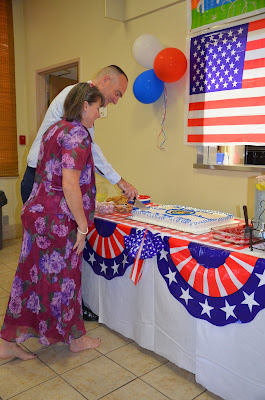 Note: An update on the saga of this cake!  Originally, Linda Walmart was only going to give us 50% because, "We did make it good, the cake looked fine and you ate it." I explained that I had to PAY another bakery to make the cake look good and we didn't know it was the wrong flavor until we cut into it at the ceremony. I had the original order form and photos of all this.  It took a bit more discussing and finally we got the store manager who thanked Michael for his service and gave us a FULL REFUND. She apologized for the way it had been handled at the bakery.

Joyfully Penned by DeEtta @ Courageous Joy at 7:57 AM