One of the routines of fulltiming and being in one park for an extended amount of time is you develop a rhythm.  Every Friday afternoon we get neighbors. Every Sunday afternoon the park clears out. There can be some funny sights as they come and go - like the one who backed over the picnic table.

We've had some great neighbors.

Jim, the 88 year old pastor camps alone as a widower.

Rod, owner of an industrial coating company doing all kinds of aerospace applications. Rod gave us a tour of his Monaco and a bike rack, too.

We've also had some neighbors we were  happy to see leave, but why focus on them?

Of them all, Oli and Britt are sure to be the coolest. They are from the north coast of Germany. They came over with their two girls about a year ago. They had parental leave to use and had decide to fly to America, buy a bus and travel for a year.  Isn't this bus fantastic????? 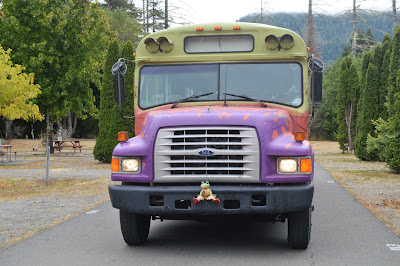 I love color. I know Michael was worried I'd be enamored and never want a Class A. I HAVE dreamed of renovating a School Bus....but I realized something I'd never thought of before - there is no BASEMENT STORAGE at all in a Schoolie. But what FUN to drive this around. They brought it over Howland Hill road. Michael was following them. I'm so impressed Oli drove the BUS through there.
Britt and the girls will fly back to Germany in two weeks. Oli will stay a bit longer to sell the bus. They asked if we thought it would sell well in San Francisco. Yep - I think they'll do just fine selling it in the Bay Area.

We exchanged emails. We talked about flying to Europe (Space A) buying an RV and touring Europe....I think we can.

*Note - I asked if I could take pictures of the bus. I'm not REALLY a stalker.