There is a canning challenge going around homestead circles...the challenge is preserve a little bit every day in the month of August. I am NOT doing well with that challenge...frankly, I'm not sure pulling out all the canning stuff to do a "bit" fits my lifestyle.  BUT I love the emphasis of  doing a bit throughout the month, rather than loads and loads in September. LOL  I have been making a conscious effort to use our garden produce as it comes on rather than waiting for the end of the season to "put it up."   Today, I put up 7 quarts of dill pickles....not a huge amount, but a start. I'm hoping to get more cucumbers - we shall see. It's not been a huge year for the garden. I think all the rain is resulting in lots of lush, green, foliage but little actual produce. 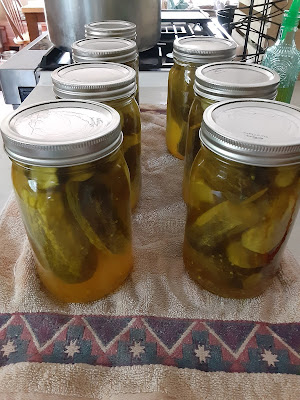 I had planned to have tea with a friend today in town... I had been trying for several weeks to meet with her and was excited we finally had a date we were both in town and neither of us had obligations. I told the girls early in the week if they had all their school done I could drop them to explore the Friday Fling while we had tea.

We were informed just hours before our "date,"  that the friend we'd had lunch with yesterday was exposed to someone who has tested positive for Covid. Brenda works with the at risk community.  Out of an abundance of caution she opted to postpone our date.

To get out of the house requires a lot. We'd made arrangements for the boys to be back from their study and home with Grandpa. We'd gotten all our work finished early so we could go play. Michael got home and was surprised to see us all sitting dejectedly around the house instead of racing to town.  He said none of us have been exposed to a positive case and we should go ahead and go to the Friday Fling, an outdoor event.  I was glad he shooed us out. It had been a let down to a busy week.

Next week is the last Friday Fling of the season - I suppose THAT could be a marker that summer is truly over in our little town.  We went to a coffee trailer and got teas, and sipped them while we walked around outside for an hour or so. 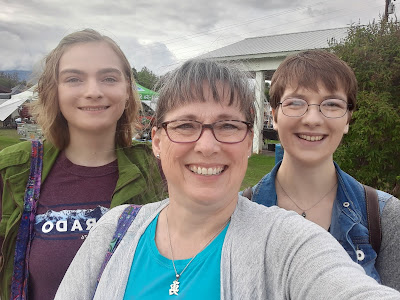 We were talking to a young lady Allie knows when BRENDA popped up. ::snort::  She had also decided to go ahead and go downtown. I told her Michael had shooed us out of the house. Thinking back on this she and I should have just opted to get our drinks and walk outside...
The Friday Fling is a weekly outdoor summer celebration hosted by our town.  When I first heard of it, I thought of the farmer's markets I'd known in other locations and, frankly, was disappointed. There isn't a lot of produce to buy...but there ARE lots of food trucks, craft vendors, and entertainment.  It has become something Stacia and I look forward to attending. We've not made it often this year - its been raining on many Fridays and as I mentioned we don't drop and go as easily as we have in previous years. I was happy this worked out. I have been looking for a light plate to match the ones I bought a couple of summers ago. I haven't run into the vendor. Brenda told me he was HERE this week.  I bought one more.  I had been planning to put up towel bars, all the electrical plates etc in our bathroom - but we've since gone with an ADA look rather than a cabin look. ::snort:: Michael suggested I buy one for the nook anyway. 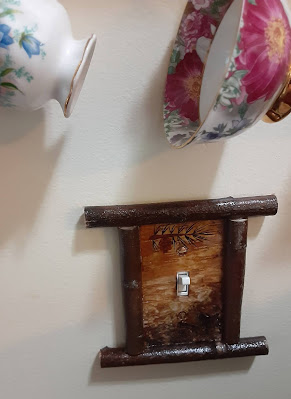 I have been wanting to buy pretties for the garden and yard. Our focus has been functional and I'm at the point I'd like to start thinking beyond functional. I'm convinced we'll never really be done with all the "infrastructure" around here. I haven't gotten out a lot and so my spending money has been growing...and I got this today. I haven't decided if I'll put it in the garden or the yard. I think mounting it on one of the orchard fence posts may work....though I'm not 100% sure HOW to mount it. LOL
We picked up pizzas and headed home....we watched the last two episodes of Home Before Dark! That is a GOOD series if you've not watched it....well we enjoy it anyway and it hasn't offended our sensibilities...

Joyfully Penned by DeEtta @ Courageous Joy at 9:25 AM