We have an annual Christmas ADAM (as in Dec 23rd, the day before Christmas EVE) tea.  The 23rd didn't work - so we moved it to the 28th (briefly) and then to the 30th.  We decided it should be called the Christmas Steve Tea - inspired by the Alec Benjamin song titled Steve (linked).  The song satirically looks at what may have happened if there had been another person there to tell Adam, "Dude! Stop. Oh, you want what you can't have, but you've got all the things you need. There was Adam, there was Eve and there was Steve." It actually reflects the plot line of CS Lewis' Perelandra.

The roads had us wondering if the Christmas Steve tea would be cancelled today...but the roads  were fine.

My mom started the Christmas Adam Tea in 2015. I have continued it because I like having a chance to get the girls together and I do it and remember mom.

As you can tell - all my gals couldn't make it. Carrie had a migraine, so she and Liv stayed home. Bre, Bella and Annie stayed home as we had a health issue in our house this a.m. and we weren't sure if it was contagious when the decision was made.
Stacia did a great job pulling out the food we'd made, setting everything up...because see Allie and I WERE AT THE URGENT CARE AGAIN.  That's 3x in 9 days.
Allie came up the stairs this morning and her face was red. Her neck, knees, crook of her elbows, hands had a red bumpy rash. I took one look at her and said, "Get ready. We're going to urgent care."
She replied, "If you want to see Rob, maybe we should just have them to dinner." ::snort::

We were not home at noon when the tea was to begin. We could not believe we were in urgent care again. Rob believes Allie has an amoxicillin rash. We had discussed her mother's allergies to antibiotics before she began taking them for her throat and before surgery. She finished the meds and two days later the rash appeared.  She's got some meds to flush out the toxins, she's got instructions for building her immune system which took a hit with surgery, and we'll see a specialist to confirm which drug she is allergic too. We are all fairly sure it's the amoxicillin. I took photos to show the specialist.
It's been one week since Allie's surgery. She's doing great! We were happy she'd gained two lbs since our last Urgent Care appointment. She's on the mend.

We came home expecting the tea to be over. I told Allie I only hoped they'd saved me a scone. They did better than that. Krista and Arielle were here. They were watching a movie. They waited for us to get home for tea and treats.  It turns out we had five females at the girl's tea and four males. LOL It was an odd year for the tea all the way around.
I had a local potter make teacups for everyone this year in keeping with our goal to shop local. I try to gift the girls with a cup each year.  These turned out great. They are a bit bigger and thicker than the typical teacup. She was going to glaze them white with a butterfly. I love the glazes on her mugs and asked her if she could use that glaze. We love them. Some look like mountains, all have a northern lights vibe going on. 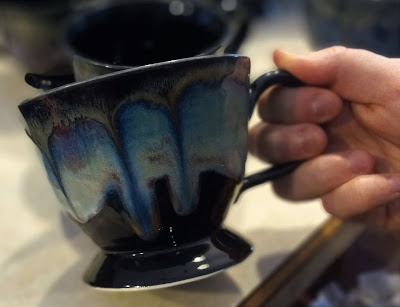 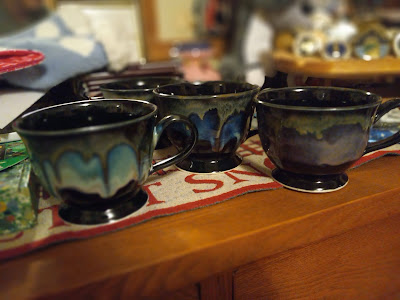 Krista brought her mold and all the things needed to show us how to make Cocoa Bombs.  I think we can do this. They turn out pretty. I envision a Chai Bomb.


Not only are they PRETTY, but they also take the mess away from hot chocolate breaks. No more spilled bits of chocolate at the tea station.

I had 1/2 a roast left in the fridge from an earlier meal. I added BBQ sauce to it, made a salad, cut up fruit and wala - dinner!
Michael, Grandpa, the girls and I ended our evening watching 2 episodes of "Lost in Space."

I cannot believe this is December 30th! I suddenly realized while at the docs we have New Year's Eve to pull off tomorrow.  I've got a plan...pizza, munchies, gingerbread competition and FIREWORKS at about 8 p.m. as the littles won't make it until midnight and we don't want the Anchorage/Eagle River crew driving home late.