This is a good day for a garden update!

No, the snow is not gone in the garden.

No, the danger of frost is not gone in our area (we have another 6 weeks to hit that milestone).

But, look! Michael is shoveling snow from the 3 small beds by the chicken yard.... 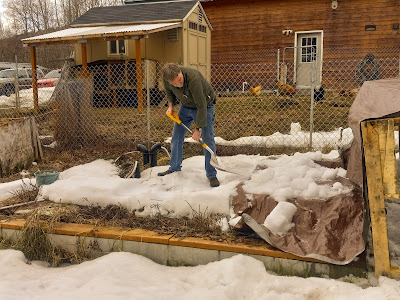 Our first greenhouse, a kit from Costco, was attached to the footers you see in the front of the picture. It was great for one season. During a winter wind storm the frame and walls blew apart. They just blew away.
That same season Michael had made hoops over 3 of my beds. We brought the plastic in during the winter...but the moose and wind did a number on them as well.  If you look closely at about middle/right of the photo you can see twisted pvc pipe and chicken wire.... We did use these for 3 growing seasons.  There is still too much snow to see how much we will salvage of them...but they weren't a great place to start seeds. 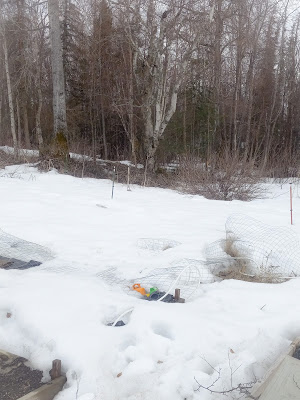 The next year Michael put some plastic over existing beds in the garden. This was GREAT. I could roll up the sides, and it had a door. It lasted through two growing seasons and 1 1/2 winters. That wind storm in January snapped the pipes in two as you can see below.  It will take work to rebuild this. This was where I started seeds and grew cucumbers and tomatoes. 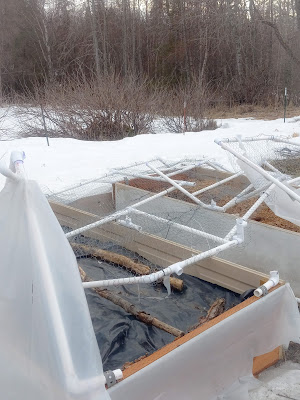 Last year Michael built a hoop house type thing. He built it strong. It was to go over the corn patch - but was finished too late in the year for corn. It stood through most the storms...until January. The plastic tore off first...and we can replace that easily. But then some of the arches snapped in two in the back half. 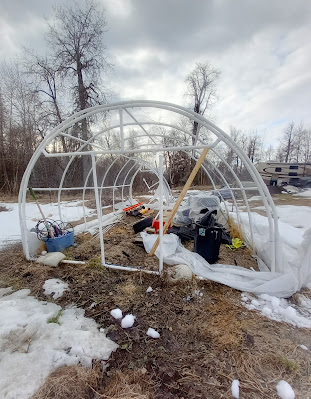 As we talked over the garden...we need something fixed where seeds can go to germinate. I looked at buying the little ones you see at stores...in fact I do have a 3 shelf mini-greenhouse I use....but the others were just too flimsy for the prices they ask around here for them.  Michael will fix the big hoop house and we'll try to grow some warmer weather crops in there...maybe corn, or tomatoes and beans....
The second one over the bigger beds may be rebuilt as it was nice to have....our season is cool and short...but long sun during that short season...the season extenders are helpful. As we looked at options for a nice place to start seeds, Michael drove me by a place that sells greenhouses. We wanted an 8x12 WITHOUT a floor  so that the beds you see Michael shoveling could be utilized and we could attach it to the footers already in place. Alas, the company had none left for this season without floors. We briefly talked about paying more for one with a floor and Michael wanted to hinge the floor so the beds could be opened. Why? BECAUSE this is where I attempt to grow melons and he didn't want to lose that space. LOL  They had an 8x12 with a floor or an 8x16 without a floor. Michael put money down on a greenhouse without a floor. It can be delivered when we have the foundation ready.

And so, Michael shoveled snow, and built this little lean to on the front of the old greenhouse foundation. He is extending it by 4 feet...more growing space for melons. LOL 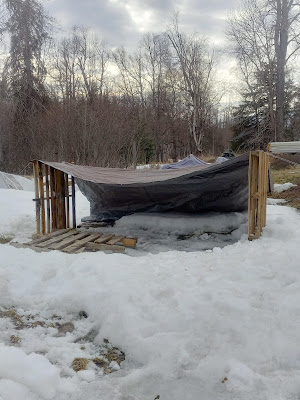 Are you puzzled about the lean to? It's TIME to start seeds and the ground is frozen. We need to thaw the ground so we can extend the foundation and get the greenhouse delivered.  He set up his propane heater and set about melting snow and thawing the ground. We may move the thing to the garden next. 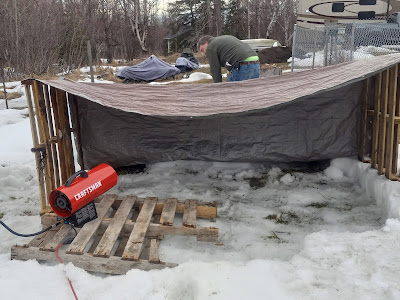 Today, Michael said the ground was thawed enough for he and Alex to begin the project. 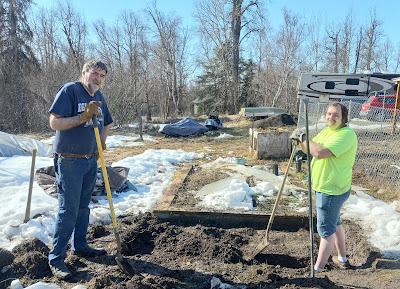 Michael assures me this is going to be wonderful. He's out looking to buy concrete and lumber. He hopes to find a concrete saw to take out the door/step in the front....but we are going to be good to go by May.

And maybe, just maybe, we can grow a melon this year.