"Trust the GPS," they said!

Friday! TGIF.  Stacia reminds me it's been two weeks since we were quarantined.  She agrees with Allie that we should schedule a quarantine every 6 - 8 weeks. The idea may have merit. LOL We've realized the past two weeks have been tiring as our sleep schedules are disrupted.

It's begun - the summer thing.

I find the summer exhaustion harder to physically deal with than the darker winter days. I simply wake up when the sun is up...with the time change and more sun...at this point *I* am not waking up earlier or staying up later...but the girls and GG are. GG is up at least 2 hours earlier than previously. He is staying up at least an hour longer too. The sun didn't set until 9:24 tonight and it was light after that.  GG waking up early means on the mornings I leave early (so Michael can sleep in and I get done and home before GG wakes up), things are out of kilter. Instead of GG waking up when I'm coming home he's waking up about the time I leaving home. It means the girls are falling asleep later - and still attempting their 0600 rising. While I'm not waking up earlier, GG 's new schedule has impacted my energy level and the day's schedule.

We still have lots of snow at our house....yet, we are certain spring is here.  The cottonwood has begun blooming and my burning eyes coincide with the buds.  And, then, I REMEMBERED....mosquitoes. Spring is not ALL about hikes, green grass, gardens and birds....there are MOSQUITOES. Isn't it funny we often forget the challenges of spring and summer, when we are tiring of winter? That'll preach. I have found new joy this year in winter as I sought to wholeheartedly embrace it... and now I will wholeheartedly embrace spring/summer....bugs, allergies, and all. LOL

My day began with a 0530 small group centered around wellness. I enjoy this group, its held via zoom and has women from all over the "lower 48."  This morning I found myself fighting sleep during the lecture....and it was a good lecture. LOL

Stacia and I left at 7:30 for Bible Study. GG woke up as we left the house. Michael has restless nights due to his Parkinsons...so we are all tired. To be honest, it was a hard Bible study week. We were simply distracted and weren't sure why.  The verses were still great, the words were there but we just didn't click as usual. I chalk this up to a week which was overscheduled (due to appointments put off during quarantine landing in this week), and to our shifting sleep patterns in the home....As I have written about the season change, I suspect this adjustment may be the main culprit.

Or MAYBE we were off as STACIA was thinking about the promised experience of driving home after study. Who knows? About that drive - she rocked it! She got up to 55 mph, handled traffic well and we only had one small moment of panic - my panic. The move into the turn lane was a bit rocky....my fault. I needed to have explained proper turn lane etiquette a bit more. 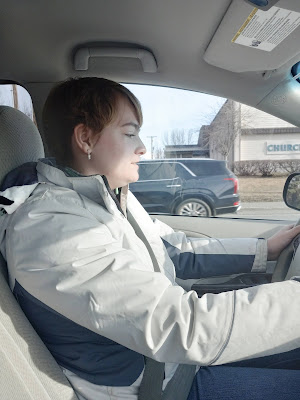 Stacia was very happy to be safely home. We're proud of you Stacia! 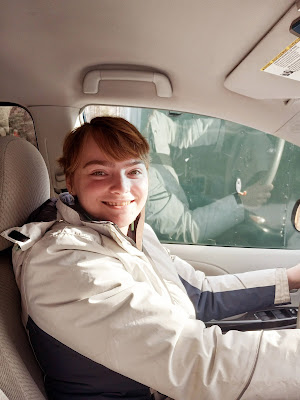 Now that the big hurdle of going faster speeds and dealing with oncoming traffic has been passed, I am looking forward to being chauffeured around town in the upcoming month...and then we'll get their licenses and be sure they are up to driving THEIR car - which is a standard.  We still have roundabouts, inclement weather, and more night driving to conquer. I think I'll also insist on some hours driving in Wasilla as it has more traffic than our hometown.

Back at home Stacia had her second Japanese session of the week and Allie finished the daily work in Algebra 1.  They are wrapping up the school year.  They both still have about 6 weeks of work  in Brit Lit and Japanese for Stacia; ASL for Allie. A good year is drawing to a close.

The afternoon found us meeting with Pastor Shannon to discuss our summer and ministry schedules.

The girls and I were excited to head to Houston, AK for a high school play in which a couple of youth members were acting. I had discussed the best way to get there at life group. Two differing routes were recommended. In the end I was given sage wisdom by a gentlemen or two, "Trust the GPS. Follow the GPS."

I debated having one of the girls drive out and the other back, but since it was Friday night and we weren't 100% sure where we were going or what sorts of traffic we'd encounter I drove.

"Trust the GPS," they said.

We went down a main thoroughfare - Bogard. Then it cut us across to the PW highway, until it dumped us on the Parks hwy. This Bogard/PW/Parks Hwy route was a combo of the two ways suggested to me at life group. We found the turn off, found the off streets....but as we continued it was taking longer than expected. The GPS never recalculated or gave any hint we were off course.

"This is a sketchy place to put a high school."

"Trust the GPS,"  I remembered.

Up a hill, the pavement becomes gravel, gravel becomes dirt, dirt becomes mud...as we descend to a dead end in a run-down community of homes around a lake....hmmm....a menacing and aggravated rottweiler was lunging at the car.

Ah, a lady up ahead. I'll ask her how to get to the high school.

The girls roll up the windows and lock the doors. ::snort::

That granny was SCAREY. She had a hard, menacing look on her face and was waving some sort of stick around. The girls said it had something to do with butterflies. I'm not sure.

I decided our best bet was a turn around in the mud, praying not to get stuck, and to simply, "Trust the GPS."

Sure enough it took us right to the school....not sure what the adventurous addendum was about.

The kids did a great job and it was a fun play to attend.

The girls and I stopped at the grocery store on the way home to buy supplies for Sunday's family Easter/Birthday celebration.

We should sleep well tonight. Two more busy days and then we are hoping for a "normal" schedule next week. LOL

PS - the GPS has switched itself to a "fuel-saving" mode. NOW it tells me it will avoid hills and lots of stop and start traffic...which may explain the odd route it took us on...it's pretty hard to avoid hills in Alaska.