Playing with the Grands

It makes my heart happy to be greeted by two nearly two-year-old boys and a nearly five-year-old boy each Tuesday morning. Such exuberance! The boys are on the tail end of their colds, as am I. Arielle determined we could play this week. I'm not sure when she took this photo, but I'm glad she did.
She went off to her meeting and the boys and I read, had snacks, built towers of blocks, had snacks, picked up toys, had snacks... Little Buddy is much more interested in knocking towers over than he is in building towers. Benny has learned to protect his towers. 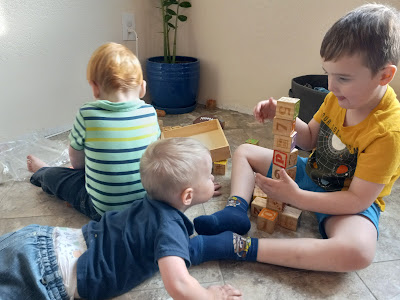 BreZaak's crew are learning about Vikings. This week they wove some bookmarks using a Viking pattern.
I believe Bella photo bombed Gideon.