GG/Dad had a doctor appointment today. CoRielle had shoveled out a spot for us...but with the girls' snowbound cars so close in it meant the driver had to wade in drifts to get in....Stacia and I went out to shovel out Allie's spot, so she could move over to her spot. We also needed to widen the cleared area between my spot and their spots so we could all get into the car without wading in drifts. Millie is happy to help. 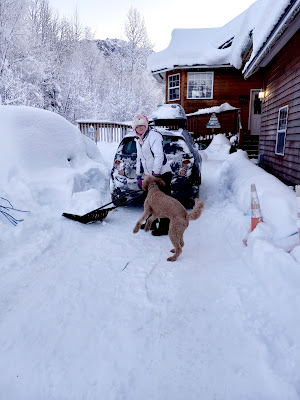 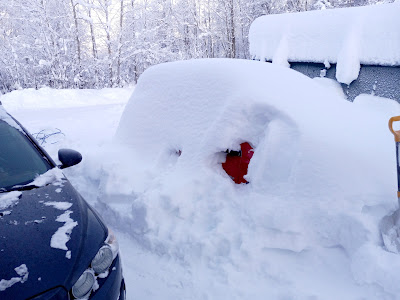 The thing is we didn't want to just "throw it out of the way." We needed to MOVE it clear out of the parking area.  Allie had an appointment she needed to get to the first day and much of the snow came off her car into the space between cars. As we considered how we wanted to tackle the project we saw Michael had a plan. He had packed down several paths. We loaded up our shovels and dragged them along the paths. It would be SO much easier if we had utility sled. 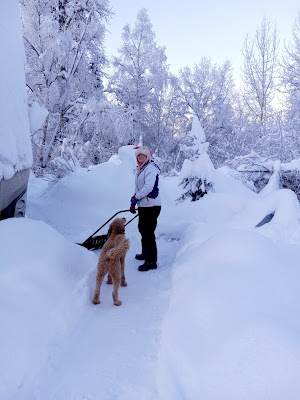 Our property has a drop off at the end of the trail....well it used to be quite a drop off. It's full of snow now....but anyway that's where we dragged a lot of snow.  The moose have obviously found the trails and appreciate Micahel's hard work. 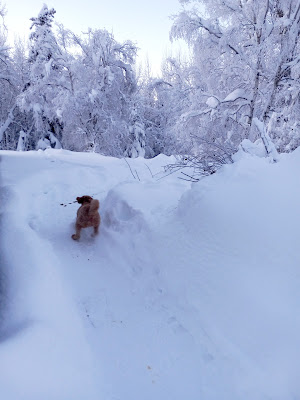 We worked as long as we could and still get inside and get ready for GG's doctor's appointment. 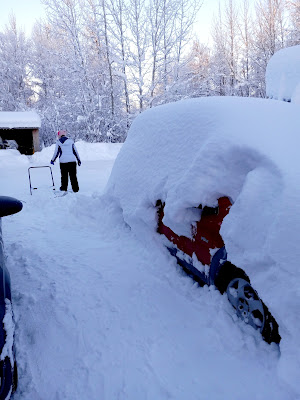 Years ago, I learned to snatch one on one time with the kids while out running errands.  I asked if anyone wanted to come along. Allie opted to come with me and GG. Stacia stayed home and had the house alone. She used the time to make Christmas Crack and some chocolate/kiss cookies for an upcoming tea.

Allie and I were able to talk on the ride over, and she enjoyed time reading in the waiting room. Michael had an appointment and met up with us at the doctors. We discussed new complaints Dad has and how to juggle quality vs. quantity of life issues.

Michael took Dad out for lunch, a haircut and a quick shopping errand.

Allie and I were able to snatch more time to talk, headed to Freddies to pick up a few groceries, as well as Dad's meds.

We got home in time for Allie and Stacia to head to the youth Christmas Party. I met with four other youth moms at a local cafe for drinks, eats and talk. It was wonderful.

It was a full day.  Today is winter solstice. Yes, it's dark...but we should be gaining a bit of light every day now...

Joyfully Penned by DeEtta @ Courageous Joy at 8:27 AM