We read about strips of marinated meat, grilled outside on skewers and served at streetside vendors, in one of our books when we were working on our lapbooks in San Angelo. We thought they were called "yakitori". We've been looking for these everywhere since we arrived (that and Siapao).

I SAW some at the Vendors outside the museum. Mike doesn't like to pay fair prices for food. BUT he could see that I was drooling and begging and so gave me Y300 yen to try it. No one else wanted to try.

I declared them GOOD!

Stacia tried it and declared it GOOD. 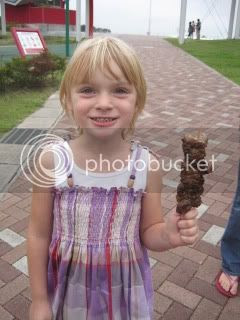 Everyone tasted and wanted more. Mike went back and bought another one. This earned him big smiles and bows. We wanted more.

Jared went back and bought one. He threw in his growing Japanese language. He got laughs, smiles and bows. We wanted more.

The only one left to send was Arielle. She's usually shy about talking to "strangers." She zipped up there, bowed, ordered in JAPANESE...made all the right small talk...and they loved her. They gave her THREE sticks....one free. 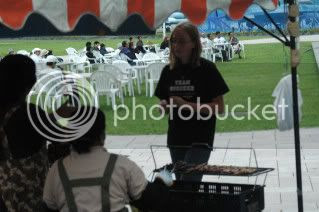 I've researched to get the right name for our tasty dinner. Yakitori translated would mean "fried chicken" and this didn't taste like chicken. I could have sworn it was beef. Everyone I ask tells me they don't cook beef on these skewers...but hmmm....so I searched and found this. It may have been better not to KNOW about all these variations. It would seem we had yakiniku - grilled meat - beef/offal...and I'm surely hoping it was beef.

Ah well, it WAS good and I'm sure to buy it again.

Mel is that pronounced "Oh She" or "Oy She"?

Way to go Stacia! Way to go Arielle! Way to go Jared! Sounds like you kids are trying new things and also doing pretty good with the language.

Wow, if Stacia & Arille like it then it must be good. Did Alexander try any of it? As Dad told me so often in Liberia and the Philippines....."Jan, if it tastes good -- don't ask" But I always had to ask and sure did taste some interesting stuff.

Way to go Arielle I am so proud

I was just telling our foreign exchange student (who wants to have us try all kinds of various things when we're in Europe) that I'm ok with trying other foods unless it comes to meat.... I'm pretty much a chicken or beef person and once in awhile a tiny bit of pork.... Just thinking about other types of meat can turn my stomach.