I Know Where the Socks Party!

It began innocently enough. I was promised the "biggest" washer and dryer the base FMO office could send me.  A Whirlpool commercial set arrived.


Eventually the washer died and they brought me a replacement which spins out just fine on Japanese electricity. ::snort:: At that time, I told them again it takes 180 minutes to dry a normal size load. It makes terrible noise. There is lint everywhere. They suggested I clean the outside lent trap monthly and that this is just the way American appliances run on Japanese electricity.  I decided to move to a natural and cheaper alternative and use the dryer as little as possible. 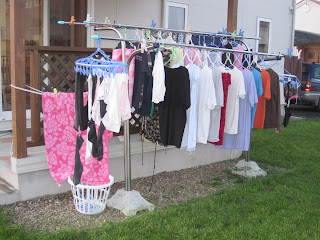 We continued to change the lint traps OFTEN. We used the dryer as little as possible. It was LOUD. Rainy season came. I tried to dry a load and it never dried. I noticed there was no heat in the dryer at all.

I called FMO. They came out. It appears there is a switch for "no heat" and that had been switched.  I felt so dumb. However, they were HERE now. I put on my "angry eyes". ::snort::  I told them to listen. I put the pair of jeans in there, turned it on and it made a bit of noise. I told them it's LOUD when you let it run for a bit....they seemed a tad alarmed.

They opened the lent trap...took the drum apart...and now...I know where the socks go to party...and the wash cloths and POT HOLDERS...How did they get from the dryer drum to the bottom of the dryer?The gentlemen continued looking....and discovered the belt was frayed (I helpfully pointed it out as they began to put it back together), and the roller was BROKEN...the drum was just doing whatever in there.

They removed the demonic dryer. I'd been putting up with this thing for nine months. I guess the "determined eyes" are needed. 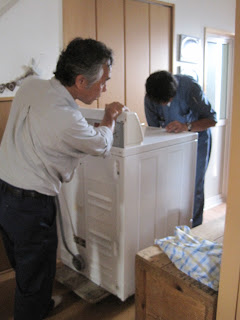 I  now have a GE...way more knobs and gadgets.....it's QUIET...and I get some loads done in 40 min. This is good with all the RAIN we've been having this week. 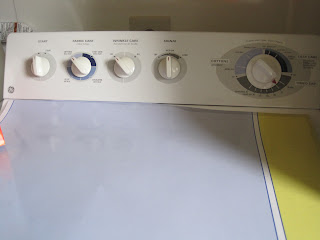 Yippee! They just don't make appliances like they used to. My parents have the same Maytag set they've had for as long as I can remember (so at least 40 years). I, on the other hand, had to replace my washer last summer. It was less than 7 years old. Sigh!

I have that same dryer and the matching washer. They are fabulous. I can dry a whole load of towels on high in 45 minutes. 50if it is a big load. I also love the low heat detting for delicates. Glad you finally got a quiet dryer that works.

So glad that finally got straightened out

Kris - it's WONDERFUL and just in time to avoid the fog and rain.

9 months! Glad you got something nicer/newer after all the aggravation.