It was nice and open when I arrived.  Then came the digging for a foundation. 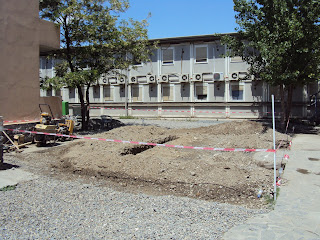 Next concrete, and then came the conex-style rooms.  After this they built the stairs and top deck complete with its wood railing.  The new neighbors are officially here. 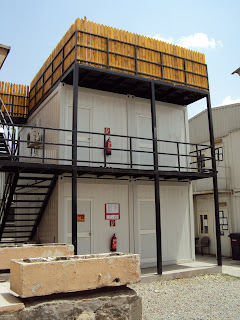 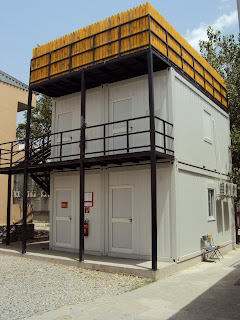 Compared to just about anyone on the compound, these are the nicest digs here.  They actually have restrooms and showers in their individual rooms instead of having to walk down a hallway to share one with who knows how many dozens of people.  The one good thing is the annoying light that blazed into my window all night is on the far side of the conexes - nice.  Another good thing, one of the new "neighbors" a strong Christian brother.  It is good to see him coming and going.
-Michael
Choosing Joy!
©2010 D.R.G.
~Coram Deo~
Living all of life before the face of God...

Joyfully Penned by DeEtta @ Courageous Joy at 11:46 AM

That is very true. These folks are NATO media. NATO paid for these conexes and how they were fitted out. Most conex-style rooms have three people in them. This is rather cramped, but one and a private bathroom? That is the height of luxury, out here anyway.